Purpose: The purpose is to determine if any genes had a gene expression change that was significantly different than zero.

Calculate the Bonferroni and p-value Correction

Purpose: In the previous analysis using STEM, a number of gene expression profiles were found that grouped genes based on the similarity of gene expression changes over time. The YEASTRACT data based will be used to explore whether the genes share the same expression pattern because they are regulated by the same of transcription factors.

Purpose: Analyze the regulatory matrix files generated above in Excel and visualize them using GRNsight to determine which one will be appropriate to pursue further in the modeling. 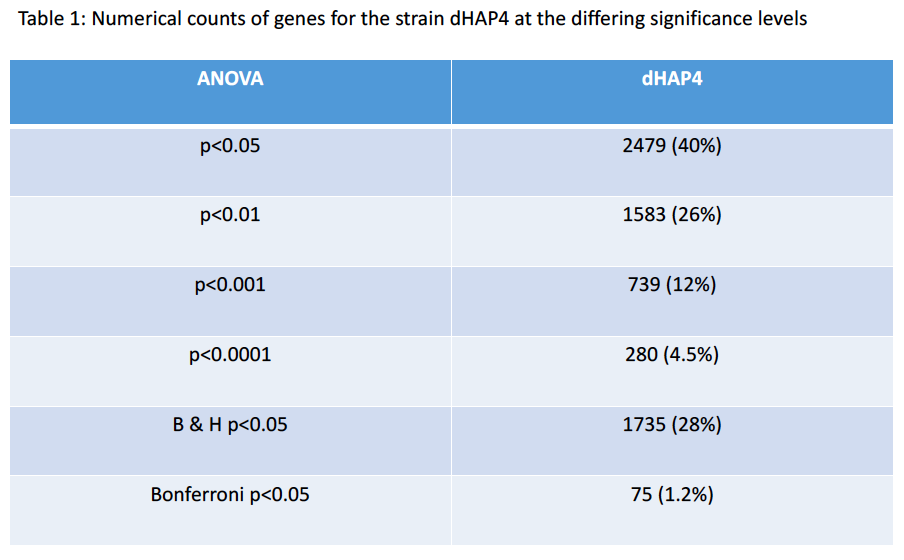 Why did you select this profile? In other words, why was it interesting to you?

How many genes belong to this profile?

How many genes were expected to belong to this profile?

What is the p-value for the enrichment of genes in this profile?

How many GO terms are associated with this profile at p < 0.05?

How many GO terms are associated with this profile with a corrected p value < 0.05?

All definitions were found at the following: http://geneontology.org

The P-value cut-off being p<0.05 often amounts to numbers seeming significant by chance. This means that 5% of our data would be seeming significant by chance or 309 times. Since we have more than 309 genes that pass the cutoff, some of our values are significant not simply by chance. This showed that the p-value is a moveable confidence level. Through applying the additional tests- Bonferroni, as well as Benjamini and Hochberg corrections to the unadjusted p-values we applied more strict criteria to the p-values than simply performing anova. In week 5, through various software such as STEM, GRNsight, and YEASTRACT, various tests were conducted to identify the relationships between transcription factors in the dHAP4 strain of yeast. The STEM program produced seven significant clusters, of which profiles 16, 40 45, and 48 were induced during cold shock and then repressed during recovery, while profiles 22, 2, and 9 showed an opposite trend. I chose profile 48 to further analyze due to its upward trend during cold-shock. Profile 48 was then further analyzed through YEASTRACT software to determine the transcription factors responsible for regulation of these genes. Five were determined to be significant and one border-line significant. These genes were then made into a matrix and uploaded to GRNsight where a network was formulated of all the interactions.

I would like to acknowledge my homework partners who also worked with the dHAP4 strain, Desiree, and Brianna. Desiree, Brianna and I texted a few times and met in person. Additionally, Dr. Dahlquist helped me multiple times via email and in office hours with errors I was making on excel. For the week 5 assignment Dr. Dahlquist also helped me to understand all of the software and some minor issues I was having with what information needed to be input in which of the various locations.

Except for what is noted above, this individual journal entry was completed by me and not copied from another source. Avalekander (talk) 19:43, 13 February 2019 (PST)

The Week 4 and Week 5 Assignments were referenced to create this journal entry.

The data was provided by Dr. Dahlquist's lab. She also provided the Excel file "BIOL388_S19_microarray-data_wt" with the raw data.

I would like to reference Gene Ontology where I defined the gene ontology terms I chose at http://geneontology.org