The purpose of this experiment is to further explore the Tai et al 2007 and 2005 papers in an attempt to understand how to simulate a two nutrient chemostat using MatLab. Additionally, it reinstates the importance of providing replicable methods in research publications.

Time: The data was collected after values were constant for 3 volume changes, resulting in a total of 100 hours.

K: concentration of glucose at r/2

L: concentration of ammonium at r/2

The graphs developed showed the ammonium and glucose abruptly leveling off in glucose's case and flat-lining for the ammonium which seems a bit off. The cells do show a steady decline however which would make sense appearing that a steady state was reached. The steady states in these graphs however do not match those in Tai et al's (2007) Table 1.

Calculation converting residual glucose and ammonia from mM to grams. 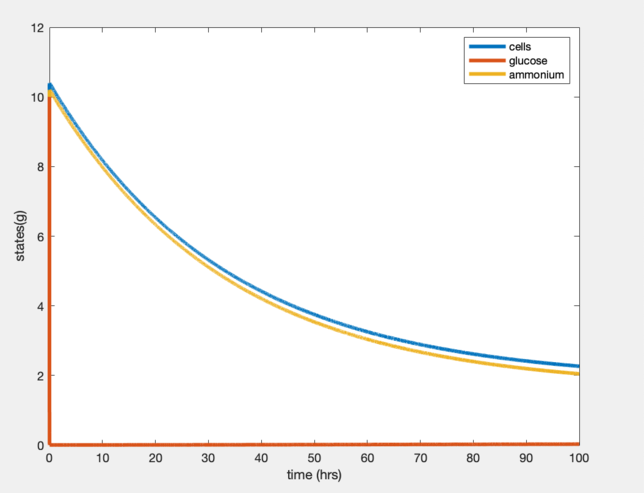 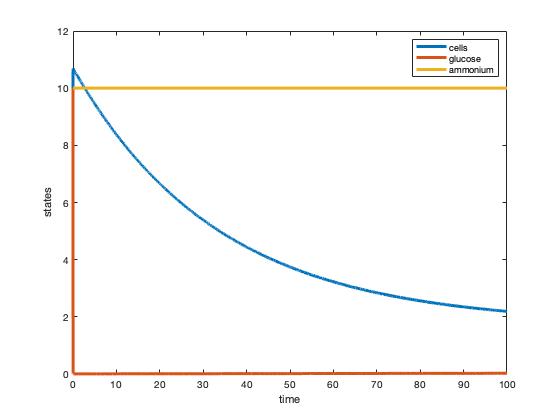 Through analyzing table 1 in the Tai et al (2007) paper a more thorough understanding of the variables was developed. Without the explicit stating of these variables, the reader has a significant amount of extra work to be done if choosing to replicate the experiment. The exact values for some parameters were then calculated and plugged into Matlab to simulate a two-nutrient chemostat model. The graphs developed from this model (figure 1 & figure 2) show different steady states than those stated in Tai et al's (2007) paper. Both simulated graphs showed glucose to be immediately consumed and differing rates of ammonium consumption.

I would like to acknowledge my homework partner, Edward who helped me to complete this assignment. Except for what is noted above, this individual journal entry was completed by me and not copied from another source. Avalekander (talk) 19:13, 26 April 2019 (PDT)