By performing data analysis of the wild type microarray data significant transcription factors and genes can be identified and made into visuals.

This data analysis was performed on the wild type microarray data (see "Data and Files" section).

The following was performed to ensure all the computations were done correctly thus far.

Calculating the Bonferroni and p-value Correction

The following adjustments were done to the p-value to correct for the multiple testing problem.

The following was performed to ensure that the data analysis was performed correctly. This helped find the number of genes that are significantly changed at various p-value cutoffs.

"Stem.jar" was double-clicked to launch the STEM program.

Comparing results with known data: the expression of the gene NSR1 (ID: YGR159C)is known to be induced by cold shock. What is its unadjusted, Bonferroni-corrected, and B-H-corrected p values?

What is its average Log fold change at each of the timepoints in the experiment? 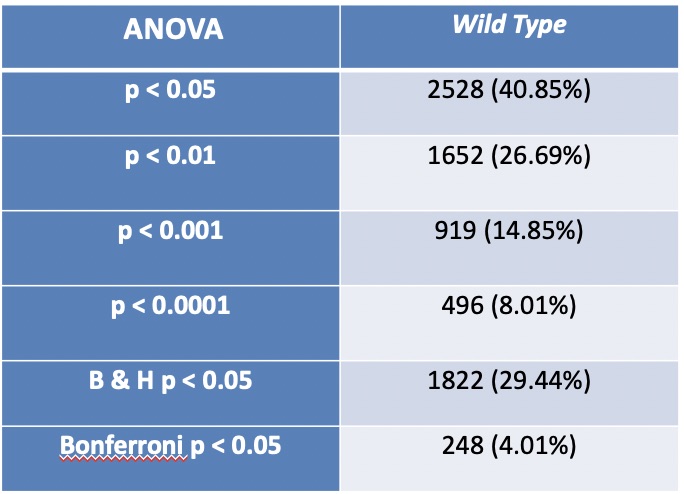 Why did you select this profile? In other words, why was it interesting to you?

All the genes in Profile 28 follow a similar pattern of up-regulation until the 60 minute time point, where it sharply starts down regulating and returns to baseline. The number of genes is also significantly higher than what is expected.

How many genes belong to this profile?

How many genes were expected to belong to this profile?

What is the p-value for the enrichment of genes in this profile?

How many GO terms are associated with this profile at p<0.05?

How many GO terms are associated with this profile with a corrected p-value<0.05?

How many transcription factors are green or "significant"?

The purpose was to analyze microarray data of the wild type of yeast undergoing cold-shock. After full analysis, six profiles were found to be significant. Profile 28 was chosen for further analysis, due to patterns of up-regulation until the 60 minute time point, where it sharply starts down regulating and returns to baseline. In addition the number of genes in this profile (104) is also significantly higher than what is expected (20.7). Using the corrected p-value<0.05, only 4 GO terms passed the filter. Only two transcription factors were found to be significant. These low numbers are expected because this strain is the wild type and was not mutated in any way.

The following files were generated through this exercise and are accessible through the LMU Box folder for this course.

I worked with my homework partner, Sahil on performing the statistical analysis on Excel. We worked together in class on 2/12 and met for an hour and a half on 2/13 to compare our Excel workbooks. We also helped each other answer the questions in the protocol and create our p-value table. We also communicated over text for a few follow-up questions. We communicated again over text on 2/20 to make sure we were analyzing different profiles.

Except for what is noted above, this individual journal entry was completed by me and not copied from another source. Angela C Abarquez (talk) 19:28, 13 February 2019 (PST)

The Week 4 Assignment was used to create this journal entry. Specifically, the "Experimental Design" section was used to describe the protocol. A template for the p-value table was also obtained from this assignment.

The data was obtained from Dr. Dahlquist's lab. She also provided the Excel file "BIOL388_S19_microarray-data_wt" with the raw data.