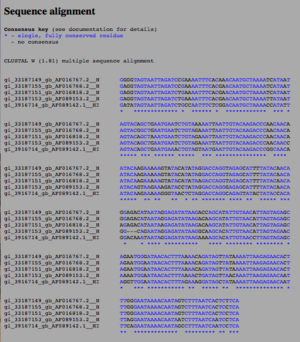 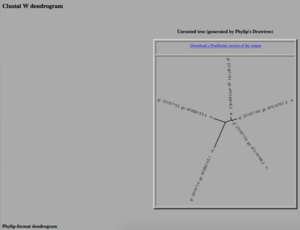 In this activity the process of analyzing nucleic acid data and inputting information into Biology Workbench was done to familiarize ourselves with this information for the project we will be working on in the upcoming weeks. The HIV sequences used were taken from a previous research study which has been cited below. With the use of the application Workbench and the tool ClusterW within it, phylogenetic trees were developed to show the relationships between the sequences mapped. The visualization of an unrooted phylogenetic tree better shows the relationships between each sequence than a rooted tree might convey. On the tree screen shot above, you can tell that the three sequences to the right are more closely related and the two sequences on the left are most likely not related. It will be important to choose meaningful ID's during future use of this application, as it was hard to identify which sequence was which when the accession numbers were used as the ID's on the phylogenetic tree. This activities purpose was to expose us to this software so that we would ultimately be familiarize ourselves with it before we start our own HIV research.