The purpose of this assignment was to determine the differences in DNA sequence of alleles, determine how the DNA sequence of a pigment protein gene determines the color of the protein, understand why some color phenotypes are dominant and some are recessive, and lastly, to construct a true-breeding purple flower.

a.) What are the differences in the DNA sequences of the alleles you defined in Part 1?

b.) Do all the white alleles have the same DNA sequence?

c.) Which DNA sequences are found in each of the four starting organisms? 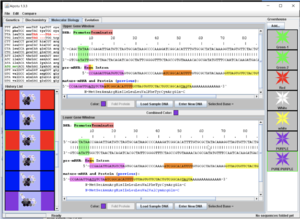 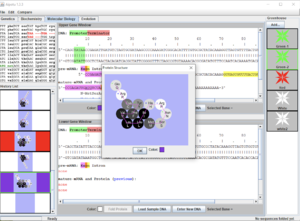 e.) How does the DNA sequence of the different alleles explain the effects of mutations you found in part I?

The purpose of this experiment was ultimately to be able to understand how to use [Aipotu], how to find differences in DNA sequences of alleles, how to determine which alleles were dominant and which were recessive, and finally, to create a pure-bred organism. I learned how to compare different alleles regarding their amino acid and DNA sequences. By comparing two alleles, I could see where they differed. After collecting data from where all the positions were different, I concluded that white was the only gene that was completely recessive. Afterwards, my team members and I went on to create a pure-breeding purple flower. Some trial and error was necessary until we learned that we could change the yellow gene to a red one, and breed it with the blue gene. This made a purple flower. Then we changed the Amino Acid sequence of the red gene, and got another purple flower. After breeding those two purple flowers, we got a pure-bred purple organism.