The following unrooted tree was produced: 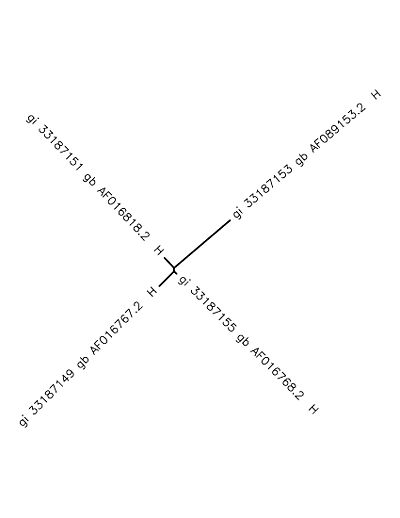 I believe that this assignment was successful. I learned how to use Biology Workbench (the DNA sequence analysis software) and to create phylogenetic trees for visual analysis. I believe that I will be able to apply the methods I learned in the upcoming HIV project. What is more, I practiced saving and transferring data across differing platforms, something that will be vital for the upcoming project.

I would like to thank my partner, Matthew Oki, for his assistance on working with the Biology Workbench. We worked together face-to-face in-class as well as out of class. Thank you also to Dr. Kam D. Dahlquist for her assistance with software in-class. While I worked with the people noted above, this individual journal entry was completed by me and not copied from another source.