In the previous analysis using STEM, we found a number of gene expression profiles (aka clusters) which grouped genes based on similarity of gene expression changes over time. The implication is that these genes share the same expression pattern because they are regulated by the same (or the same set) of transcription factors. We will explore this using the YEASTRACT database.

We will analyze the regulatory matrix files you generated above in Microsoft Excel and visualize them using GRNsight to determine which one will be appropriate to pursue further in the modeling. 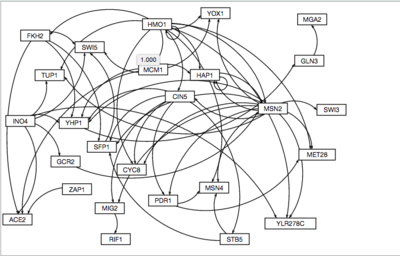 This image is the visualization of the resulting network from the Only DNA binding evidence option. There are 58 edges - or connections. 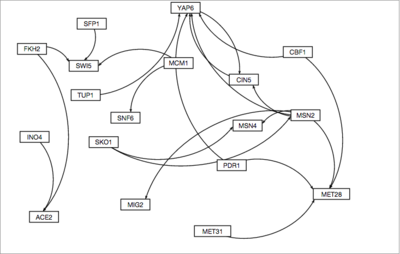 This image is the visualization of the resulting network from the DNA binding and expression evidence. There are 21 edges.

We determined candidates for our transcription factors that regulate a cluster of genes from out dataset based on knowledge I have with the WT data for S. cerevisiae. When there was overlap for genes on the list, we chose them. Furthermore, in searching the literature for information about cold shock when writing my research proposal, certain genes were mentioned such as TUP1, which we have also chosen. For others such as CYC8, their % in Yeastract was 100, so we believed that it would interesting to include these factors. We also wanted variety with our TFs with regards to their p-value. For instance, YOX1 is 0.000000 versus MSN4, which is 2.17067E-5.

The GRNs were created from the generated list from Yeastract. From the resulting network, we measured the in and out degree distribution frequencies. From those, I created a graph from my those numbers. The first sheet contained 41 genes with 384 edges - too many connections to be mapped out by GRNmap. Therefore, this would not be a potential GRN. The second sheet was modified to have 26 nodes and 58 edges. The last sheet - binding and expression evidence - contained 17 genes with 21 connections. From these distributions we chose to look at the medium-scaled GRN. However, the medium-scaled GRN underwent modifications and various deletions to bring the number of nodes between 15 - 30 with 50-60 edges. Like previously stated, we now have 26 nodes with 58 edges.

Back to User Page: User:Natalie Williams
To view the Course and Assignments:BIOL398-04/S15