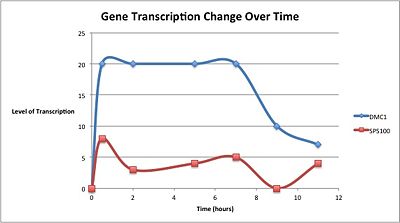 Ratio of transcription responses of three genes to the loss of oxygen.

Ratio of transcription responses of three genes to the loss of oxygen expressed as colors.

3. Gene X and Gene Y seemed to be transcribed most similarly. They both had a sharp increase at 3 hours, then declines back to near their original state at 5 hours, and finally dropped to a fraction of their original transcription levels at 9 hours.

4. There are many yellow spots at the beginning because the green and red colors used to express the levels of expression overlap. A yellow spot means that under both conditions, the gene was expressed. Biologically, this is because the cell has not yet reached homeostasis in these conditions.

5. During this experiment, the gene TEF4 was repressed. This change in expression could have been due to the cell conserving its resources by repressing the expression of genes that break down glucose. If glucose is limited, then the amount of product to break down glucose should also be limited.

7. To ensure that all genes for enzymes are simultaneously induced or repressed, the genome may have genes located close to each other that would use common transcription factors that act as activators or repressors.

8. The glucose-repressed genes would show as red or black in the microarray. Without TUP1, genes cannot be repressed. As a result, there would be an increase or no change in the expression of these genes.

9. Similar to the previous example, I would expect the spots to be red here. The Yap1p gene codes for resistance to stress, like a decrease in glucose supply. With less glucose available, Yap1p codes for continued expression of these target genes.