What is CaM kinase II (CaMKII)?

CaM kinase II (Calcium/calmodulin kinase II) is a 500 kDa molecular enzyme found in the presynaptic and postsynaptic neuronal cell that modulates a broad spectrum of neuronal activities, of which its most important modulatory role is in synaptic plasticity and long-term potentiation (LTP) associated with learning and memory. Molecular neuroscience research has identified that CaMKII is implicated in LTP induction in the postsynaptic hippocampal neurons, which is necessary for long-term memory maintenance. As a result, modulatory changes in CaMKII have been hypothesized to be implicated in medical pathologies of memory including Alzheimer’s Dementia and Angelman’s mental retardation. However, scientists have shown that CaMKII has several modulating roles in the neuron in addition to LTP induction, including presynaptic functions such as neurotransmitter synthesis, neurotransmitter secretion, microtubule disassembly, and neurite extension and post-synaptic functions such as phosphorylation of other proteins and kinases in the post-synaptic density of downstream neurons.

The Search and Discovery of CaMKII:

For several decades, scientists have established that Ca2+ is involved in many molecular biochemical pathways such as catecholamine and serotonin release in the adrenal cortex. In these pathways, Ca2+ has been shown to activate tyrosine and tryptophan hydroxylase. The same mechanism was shown in the brainstem where Ca2+ activated tyrosine and tryptophan hydroxylase activity. Yet the Ca2+ dependent activity was much stronger in brain cortical areas. Hence, scientists hypothesized that a protein kinase in brain cortical areas was amplifying the tyrosine and tryphophan activity. Thus, in 1980, CaMKII was isolated by gel filtration.It was the second Ca2+/CaM-dependent protein kinase peak eluted from a sizing column used to fractionate the calmodulin-dependent protein kinases from rat brain cytosol. In 1987, the protein was cloned from cDNA, which identified four isoforms of CaMKII (α,β,γ,δ), each capable of being alternatively spliced. Isoforms α and β are most highly expressed in the brain.

The holoenzyme of CaMKII consists of 12 functional subunits, which are grouped into two clusters of six and form a gear-shaped core. Each subunit contains a catalytic, an autoregulatory, and an association domain. Ca2+/calmodulin (CaM) binding relieves the inhibition from the autoregulatory domain, allowing autophosphorylation of the catalytic domain and complex changes in the enzyme’s sensitivity to Ca2+/CaM. In addition, in vitro experiments suggest that CaMKII has CaM independent activation by gangliosides and Zn2+.

The β-isoform of CaMKII has a higher affinity for calmodulin than the α-isoform. The multimeric structure and autophosphorylation properties give rise to many important features of CaMKII, including reduction of its Ca2+/CaM dependence following dissociation of CaM, increase in its affinity for Ca2+/CaM by more than 1000-fold, and functioning as a Ca2+ spike frequency detector. These are important as means for LTP induction and maintenance.

CaMKII shows varied distribution throughout the brain. It comprises 1% of the total protein in the forebrain and 2% in the hippocampus, a region associated with memory. The protein shows less concentrated distribution in other brain structures including the Purkinje cells of the cerebellum, brainstem, and the retina. Within neuronal cells, the highest concentration of CaMKII is found in the PSD. During neuronal development, CaMKII density increases 20-60 fold during days 10-30 of the postnatal rat brain.

CaMKII has multiple roles in the pre-synaptic and post-synaptic neuron:

As the action potential reaches the presynaptic axon, voltage gated Ca2+ channels open and thus increases the Ca2+ concentration in the cytosol. Ca2+ binds with calmodulin and the Ca2+/calmodulin complex activates CaMKII. CaMKII thereafter phosphorylates multiple downstream enzymes and proteins to invoke various responses detailed below (Figure 1). In the post-synaptic cell, when glutamate binds to the NMDA receptor, Ca2+ enters the cell and again binds with calmodulin and CaMKII. The activated CaMKII then phosphorylates various proteins in the post-synaptic density of the neuron (Figure 2). 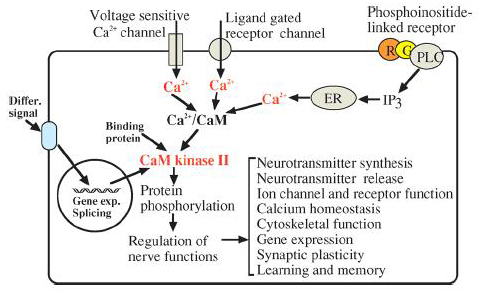 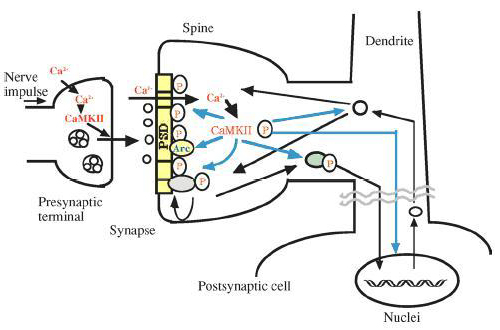 Although most well-known for its effects on LTP induction in learning and memory, CaMKII has multiple functions in neuronal cells:

1. Involved in neurotransmitter synthesis and release of monoamines in the brain

CaMKII phosphorylates tyrosine and tryptophan hydroxylase and the enzymes are eventually activated after another activator protein (protein 14-3-3) makes further modifications to the hydroxylases. Furthermore, CaMKII binds to syntaxin which helps induce neurotransmitter exocytosis.

2. Has a broad spectrum of substrates

The over expression of CaMKII, particularly the β-isoform, results in increased neurite growth and growth cone mobility.

1. Phosphorylation of other enzymes, kinases, and proteins found in the PSD

CaMKII phosphorylates the GluR1 subunit in the AMPA receptor which results in increased AMPA conductance. This helps potentiate LTPs in the post-synaptic cell.

2. CaMKII helps induce and maintain LTP and has a major function for learning and memory

CaMKII is a necessary protein for the induction and maintenance of long-term potentiation, a potential cellular mechanisms of learning and memory. The proposed mechanism is that LTP induction activates CaMKII autophosphorylation. The activated CaMKII enhances the activity of existing AMPA receptors, and also activates the signaling pathway (CaMKII-Ras-p42/44 MAPK) to facilitate insertion of additional AMPA receptors into the postsynaptic membrane. Upon further stimulation, more Ca2+ comes into the postsynaptic neuron through AMPA receptors. Several pieces of evidence give rise to such a mechanism proposal: (1) Scientists have shown that CaMKII knockout mice are LTP impaired in the hippocampus, and have spatial memory deficiency; (2) after high-frequency stimulation to CA1 hippocampal neurons, CaMKII activity increased and then returned to baseline after 30 minutes; (3) the addition of CaMKII inhibitory domains resulted in decreased LTP in the pyramidal cells. And the addition of CaMKII inhibitor, calmidazolium, also inhibited LTP induction. 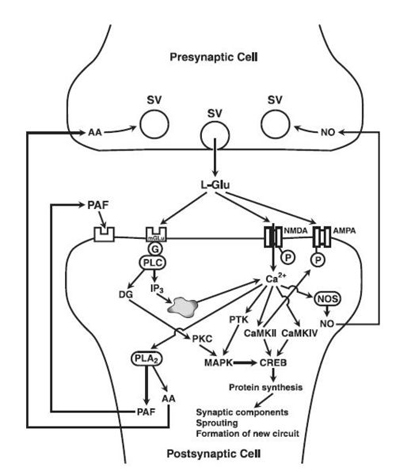 2. Angelman’s Mental Retardation Angelman’s disease is characterized by severe mental retardation and epileptic seizure events. In mice where CaMKII was mutated to cause over-phosphorylation resulted in motor dysfunction, seizures, and context-dependent learning difficulties that resembled Angelman’s syndrome. Thus, the misregulation of CaMKII may be implicated in the pathogenesis of Angelman’s syndrome.