The purpose of this assignment was use a bio-mathematical model, along with knowledge of the central dogma, to determine how the DNA sequence of a pigment protein gene determines the color of a protein. Then, a true-breeding purple flower will be created to show this understanding.

A. What are the differences in the DNA sequences of the alleles you defined in Part I? 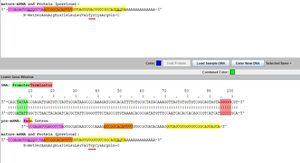 C. Which DNA sequences are found in each of the four starting organisms? 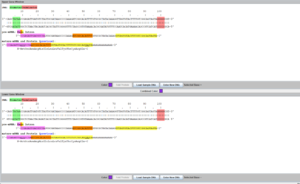 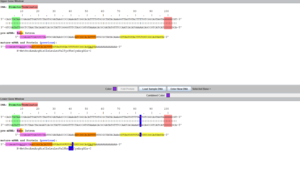 E. Advanced tasks: How does the DNA sequence of the different alleles explain the effects of mutations you found in part I?

The color of a pigment protein isn't simple as just the amino acid sequence. It involves the DNA sequence of that gene that will be transcribed to a mRNA then translated to a mature protein. It was shown that the alleles weren't as simple as dominant and recessive, but involved incomplete dominance, and even a non-transcribing gene found in the red flower. It was also discovered that two flowers of the same color doesn't necessarily mean that the amino acid sequence or even the DNA sequence were the same. For example, there was a Green-1 and Green-2 organism: one with a blue and yellow protein, the other with two green proteins. To create a purple flower, one can just mutate the yellow protein in the Green-2 organism to be red, and red combines with blue protein to create purple. However, it is not true breeding since the two alleles are showing incomplete dominance. To create the purple true-breeding flower, one must compare the blue and red amino acid and DNA sequence and combine the two differences together to create a mutated flower. It doesn't matter if the blue or red protein comes first, as long as the two differences are next to each other.