A neuron is a cell that is specialized for the transmission of nervous impulses. The axon is the part of the neuron that conducts impulses; the axon is usually a long outgrowth, or process, that carries impulses away from the cell body of a neuron toward target cells.

Changes in electrical potential of the axon can be detected and displayed on a recording device in the laboratory by one of two basic methods:

1. Intracellular Recording: Two electrodes are placed on either side of the membrane of the neuron, one inside the cell and one outside. A change in potential difference between the electrodes is recorded as the ions move into and out of the cell. This technique is performed on large, isolated neurons.

Powerlab will act as a digital 2-channel oscilloscope. Time will be recorded on the X axis and voltage on the Y. Time and sensitivity can be adjusted on each channel. A useful feature of PowerLab is that the operator can initiate a sweep of the screen (i.e. the computer starts sampling). This is known as the TRIGGER. The trigger allows you to capture the time period immediately after an event. It is possible to "trigger" the computer, to begin to collect data (to sweep), at the same time as the stimulus is applied. Thus a record of the stimulating event and the time when the Action Potential appears (latency) can be measured. In this application of the trigger, the computer is set to generate a single sweep upon stimulation of the human achilles tendon as well as the frog nerve. Time can be measured on the X axis. You will be using Channel 1, where the trigger will be displayed, and Channel 3, where the responses will be recorded. The PowerLab set up is slightly different for the Earthworm giant axon recording, but the theory is similar.

The conduction velocity of the action potential is determined by measuring the distance traveled (length of the nerve in m) and dividing by the time (sec) taken to complete the reflex arc, also called the latency.

Draft data tables in your lab notebook to record the Threshold voltage needed to elicit an action potential in the frog and earthworm (both medial and lateral Giant Axon). From the three timed trials record the time between stimulus artifact and action potential (latency in ms) and measure the distance as described in the manual. Calculate the conduction velocity in m/sec for the human sciatic nerve, the frog sciatic nerve, and the earthworm medial and lateral giant axons and enter your data on the class data sheet. Calculate the Average conduction velocity for each using the class data. 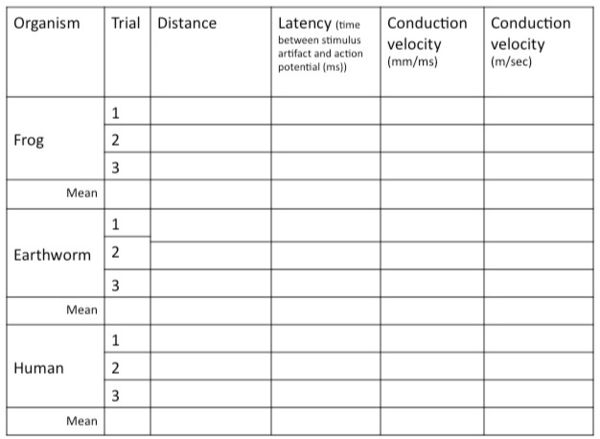 When the Achilles tendon is stretched after being tapped with a reflex hammer, the induced action potential is conducted up the leg to the spinal cord and back down where it causes the gastrocnemius (calf) muscle to contract. To determine the speed of conduction, the distance that the action potential travels is measured and the time between the tapping of the tendon and the contraction of the muscle is measured using PowerLab and ADinstruments software.

The Reflex Arc: A reflex arc is initiated by stretching a tendon, an action that stimulates stretch receptors in the muscle. Those stretch receptors respond by initiating an action potential in sensory neurons. The action potential travels through those sensory neurons to the spinal cord where they synapse directly with motor neurons. The excitation travels back to the gastrocnemius muscle where it causes contraction of the muscle. Thus the tendon that was initially stretched is returned to its original length through contraction, completing the reflex arc.

The function of this type of reflex arc is to maintain posture. Muscles are continually stretching and returning to their original length without the intervention of the brain. Note that this response is monosynaptic. The sensory neuron synapses directly with the motor neuron in the spinal cord; there is no interneuron involved.

The Reflex Hammer: is a percussion hammer used to test reflexes. The hammer that you will use has been modified so that when it hits the tendon, the hammer closes a circuit and generates a small signal. This signal is used to trigger a sweep by the computer. 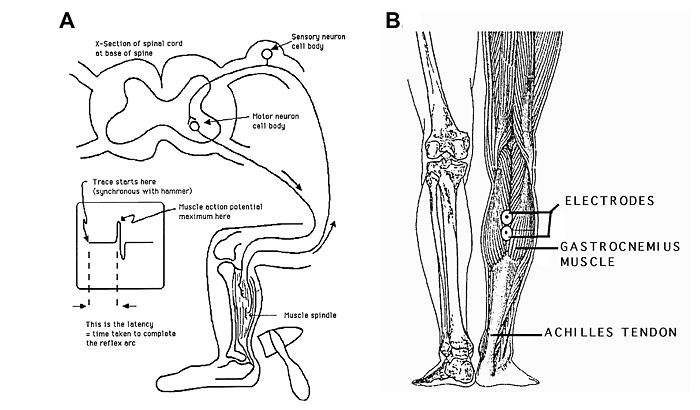 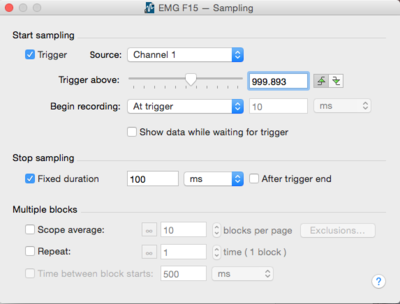 Fig. 9.1. A, Diagram of a reflex arc in a human. When the stretch receptor is stimulated by the hammer, the action potential travels up the sensory fibers to the spinal cord and synapses on the motor fibers The action potential then travels back down the nerve to cause the muscle contraction we observe as a reflex. B, Two electrodes are placed on the calf, close to each other as shown. The third electrode should be placed on a bony surface, such as the knee cap or ankle. C, LabChart 8 Setup files.

To make an EMG RECORDING: 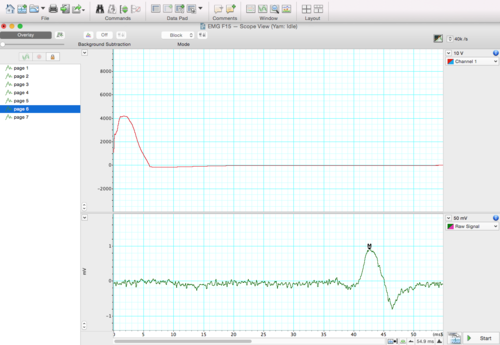 Fig. 9.2. A sample of an EMG recorded on the computer using PowerLab. The trigger signal is on Input 1 (Ch 1) at time 0 and the EMG is on Ch 3 (called Raw Signal). Place the marker "M" at the top of the first peak of the EMG. The time displayed indicates the time elapsed between the trigger signal and the gastrocnemius response, i.e. the time taken by the action potentials to propagate along the sensory neurons of the sciatic nerve to the spinal cord and along the motor neurons to the first (upper) electrode of the gastrocnemius.

An action potential is initiated in the dissected sciatic nerve of a frog (Rana pipiens or Xenopus laevis) by a stimulator (a device for delivering precise electrical stimuli). The action potential travels along the nerve and is detected as it passes two external electrodes (according to method 2 described in the introduction) and the detected response is amplified and displayed on the computer screen. The trace on the computer of stimulus and response is triggered by the stimulus; time and distance are measured and the speed can then be calculated. 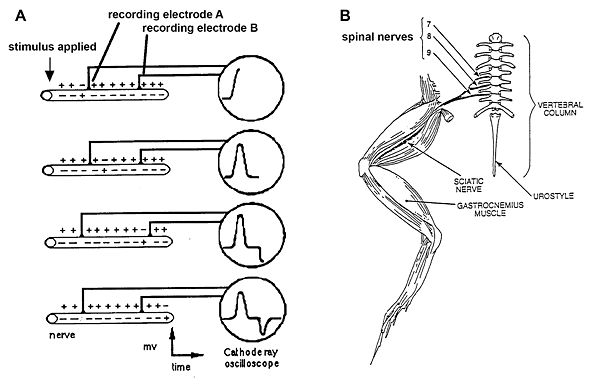 Fig. 9.3. A, Diagram of a biphasic action potential as an extracellular recording of a nerve. The stimulus is applied to the left end of the nerve. B, Dorsal view of exposed frog left hind limb and spinal column.

The Sciatic Nerve is the large nerve running from the spinal cord to the gastrocnemius muscle. It contains both sensory and motor neurons (it is the nerve that is stimulated when you stretch the Human Achilles tendon). In this lab, the frog will have been anesthetized, sacrificed, and double pithed (both its brain and spinal cord will have been destroyed). You may need to remove the skin.

To Dissect the Sciatic Nerve

Setting Up the Nerve Chamber 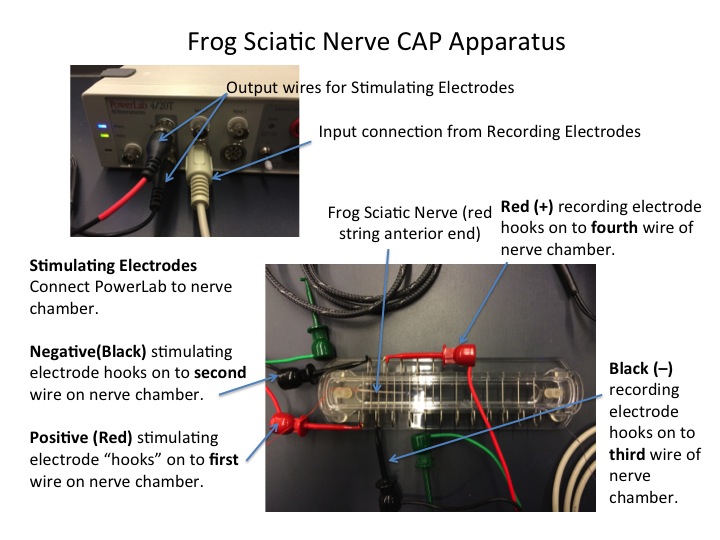 To Record a Compound Action Potential

How can the response increase in amplitude when an action potential has "all or none" properties?

This graded response phenomenon illustrates the differences in threshold that exists among the different sizes of fibers that make up the nerve. Remember, you are recording from a nerve, a large bundle of neurons, each with a different threshold. If the stimulus voltage is increased slowly and smoothly, you may observe discrete jumps in the amplitude of the compound action potential as different threshold classes of nerve fibers are “recruited”. As you increase the amplitude more neurons reach their threshold and contribute to the increase in size of the compound action potential. Eventually, as the stimulus voltage is increased, a point will be reached when the wave form of the action potential stops changing. At this point all the fibers in the nerve able to respond to the stimulus are being stimulated (Fig 9.4). This is a maximal response.

Record and save all your trials on the desktop. It is a good idea to save data frequently (under the File: save as menu) –in the lab course folder on the desktop). Be sure to include your animal and lab section in your file name. 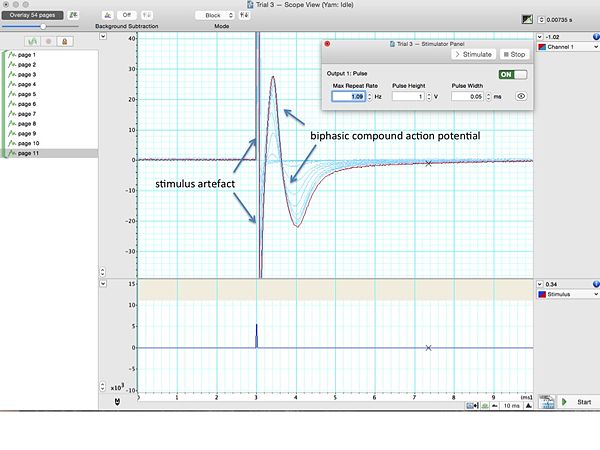 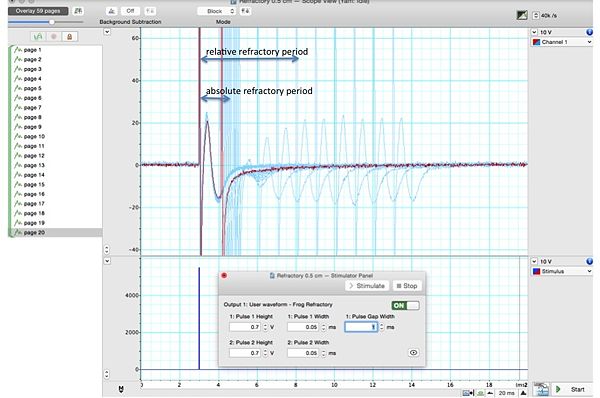 NOTE: Parts of this procedure are modified from a protocol written by staff members of ADInstruments, and provided with purchase of the PowerLab instrumentation. 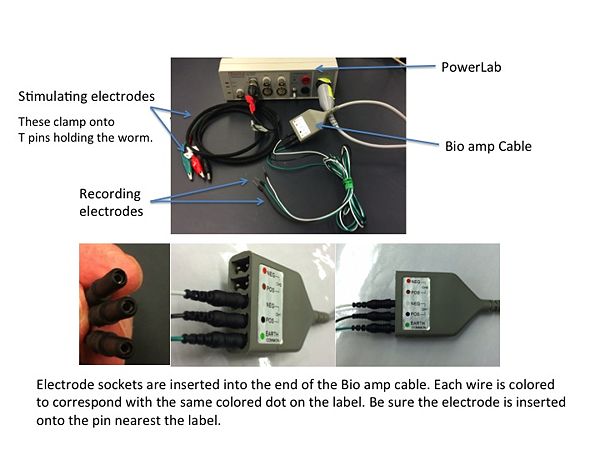 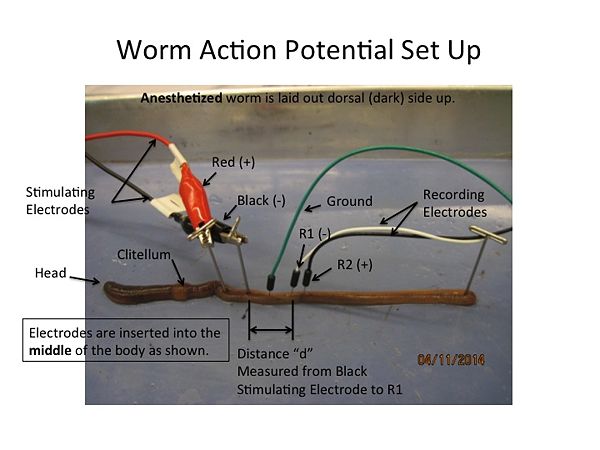 Fig. 9.6. A PowerLab setup to record earthworm action potentials B. Earthworm anatomy and electrode placement on the earthworm

Determination of the threshold voltage for the medial and lateral axons, calculating , conduction velocity, and and observing recruitment of the lateral giant axon 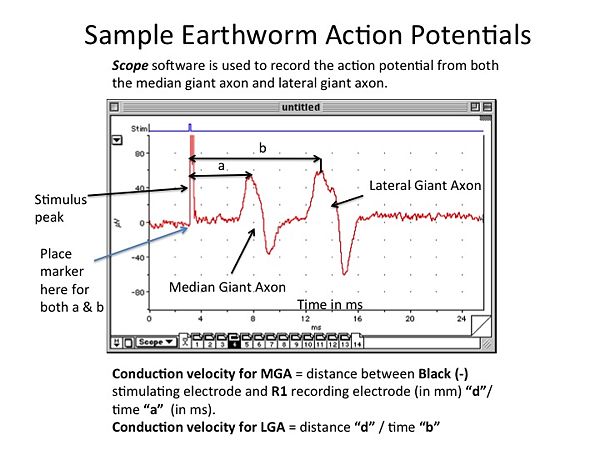 10. Discard your file or place it in the folder for your lab section.

Material in this lab will be included in the lab practical (along with the material from labs 7 & 8) . Make sure that you understand the concepts, calculations, statistical tests, and graphing covered.

Results:
Use data from the whole class to compare the mean conduction velocities of the three nerves examined today. Conduct an ANOVA comparing the speed of conduction (m/s) of the nerves of human, frog, and earthworm. Is the difference significant at the 0.05 probability level? Does there appear to be a difference in conductivity in the nerves of the human, frog and earthworm?

Discussion:
Data collected in this lab can be compared to previously documented conduction rates of the nerves of a wide variety of vertebrate and invertebrate animals. Are your data consistent with this broader data set? 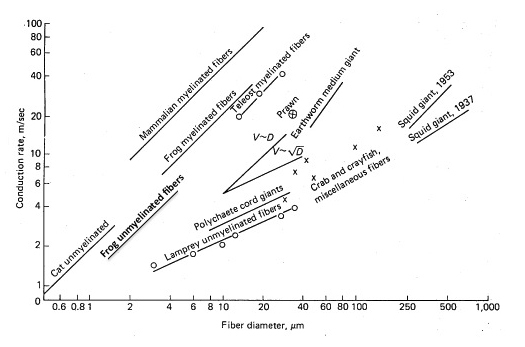 Fig. 9.8. Velocity of nerve impulse conduction as a function of fiber diameter in a variety of animals. Modified from Bullock and Horridge, 1965, Structure and function of the Nervous System of Invertebrates. W. H. Freeman and Company.


Other Labs in This Section