I. Formulate Questions and Hypotheses about Biodiversity

II. Examine Biodiversity in a Freshwater Ecosystem
a. Field Trip to collect organisms

b. Observation and identification of collected organisms

Within the solar system, life has been demonstrated to exist only on planet Earth. However, the recent speculation that Mars, some moons of Jupiter, and Saturn may have conditions favorable for at least microbial life has stirred great interest in “exobiology” – life beyond Earth. Life makes up only one part in ten billion of the Earth's mass. Current estimates suggest the existence of many millions of species, displaying a vast range of shapes, sizes, habitats and nutritional requirements. Even more remarkable is that many of these species are relative newcomers to Earth. In fact, almost all species that have ever existed on our planet have suffered the inevitable fate of extinction. It is this historical component of life and our attempts to account for it that forms a dominant theme in the study of biology. In a certain sense it also sets the study of biology apart from some of the other natural sciences, such as physics and chemistry, in that an understanding of a structure or mechanism only makes sense in the light of its history. The history of life is the subject matter of evolution. It is for this reason that we begin both the lecture and laboratory components of this course with a consideration of biodiversity and evolutionary biology.

Geological records suggests that the Earth was formed about 4.6 billion years ago, and was lifeless. The oldest known fossils occur in early ocean sediments some 3.8 billion years old in the form of unicellular organisms possessing a prokaryotic type of cellular organization. For approximately two billion years, about half of the history of the Earth, small prokaryotic cells were the only forms of life. Prokaryotes were (and are) morphologically and metabolically diverse, and are currently placed in two distinct groups (or Domains), the Archaea and the Bacteria. The Archaea are single-celled organisms that have structural and metabolic characteristics distinct from those of Bacteria. Some species of Archaea thrive in inhospitable, "extreme" environments. One living archaean, a thermophile (“high temperature lover”), is the source of DNA polymerases used in the polymerase chain reaction (PCR); these enzymes are functional at the high temperature used in the reaction.

Eukaryotic cells are first known from fossils about 1.8 -1.9 billion years old. The emergence of eukaryotic species is considered one of the milestones in life’s history. Presumably it was the increased complexity of these types of cells that allowed them to become the building blocks for later multicellular organisms. The first good evidence for true multicellularity occurs in fossils of red algae that date to only about 1.0 billion years ago, and the great majority of plant and animal groups have even a shorter history. Diverse multicellular animals occur first in Cambrian strata, about 540 million years old. Examples from the middle Cambrian Burgess Shale fossil assemblage are pictured below. Some of the animal groups represented no longer exist, but their imprints in the rocks reveal an era marked by a rapid pace of evolution and speciation. The fossil record reveals that in addition to rapid species radiations there were also periods of mass extinction.

Classification systems are used to help one cope with the millions of diverse organisms that currently exist or have existed. Most biological classifications seek both to provide a unique, universally- used name for each organism and to group organisms by common ancestry. Using data from fossils, and an ever-increasing array of morphological, chemical, and molecular data, taxonomists are facing new challenges that lead to interesting new questions.

All human cultures have struggled with classifying the world around them into units. Evolutionary systems of classification are based on judgments about how recently a common ancestor of a group existed. The basis for inferring common ancestry have changed throughout time, and there remains no absolute mechanism that everyone can agree upon. The difficulty begins in even defining the most fundamental unit, the species. Many textbooks define species as an interbreeding group whose members have similar characteristics. Yet, how can this definition work for organisms that hybridize or reproduce asexually or are extinct?

Traditionally, life has been subdivided into progressively smaller and smaller units in a hierarchical structure. Each category is included in all of those "above" it. The typical levels of a biological hierarchy are:

In 1969, Robert Whittaker proposed a five-kingdom classification scheme based on similarities in cell structure, morphology, developmental features and nutrition. The five kingdoms grouped organisms as Monera, Protista, Fungi, Plantae, and Animalia. However, in the 1970s, Carl Woese proposed a system that divided living things into three major taxa or domains based on differences in the base sequences of their ribosomal RNA (rRNA): the Archaea, the Bacteria, and the Eukarya. Archaea and Bacteria were formerly grouped together by Whittaker as bacteria in the Kingdom Monera. In 1996, Carol Bult worked with Woese to sequence all 1.7 million base pairs of DNA in the archaean Methanococcus jannaschi. On a molecular level Woese determined that this organism and other extremophile bacteria did, indeed, deserve reclassification in a separate domain (the Domain Archaea) because more than half of their genes were not homologous with those of Bacteria. This finding gave evidence of separate evolutionary pathways for these two major groups. The members of the Eukarya domain include all of the organisms in the other four of Whittaker’s kingdoms. Only Whittaker’s Monera are excluded from Woese’s Eukarya domain.

While there is continued discussion about where organisms fit in the highest levels of the biological hierarchy (i.e., at the kingdom or domain level), there is general agreement at the genus and species level. We all currently use a system of binomial nomenclature devised by Linnaeus in 1753, whereby organisms have simple two-part scientific names that you will become familiar with in the laboratory part of this course. For instance, you will be working with Tribolium confusum, (genus and species name for the "confused" flour beetle) and Helianthus annuus (sunflower). Note that when writing scientific names the genus is capitalized while the species is not, and both genus and species are underlined or italicized. The species name should never be used without its accompanying genus name, or at least the first letter of the genus.

Our goal for both the course and for this lab is to appreciate the breadth and complexity of nature and to realize that humans are only a tiny component in the midst of a tremendous historical diversity of life forms. In fact, non-human life has accomplished most of what we try to do. Other life forms fly, capture energy from the sun, wind, and tides, light up the darkness, live in every crevice on Earth. Many human inventions are patterned after even more elegant designs found in nature. Architectural struts and beams can be seen in the intricate structure of plant leaves. Termite towers are more efficient than the most sophisticated air conditioning/heating systems. Wood frogs have the ability to be frozen solid and then resume their lives. The closer we look at the living world around us, the more humble we should become. Rather than dominating the natural world we live in, we must learn to fit into it in a more sustainable manner. We must look at biology and at nature as a mentor rather than as something we can control.

Field Trip to Collect Organisms in a Freshwater Ecosystem

The class will go on a short field trip (weather permitting) to collect organisms for viewing under the compound and dissecting microscopes. PLEASE wear appropriate clothing and footwear. The laboratory instructor will demonstrate the use of the plankton net and collection jars. In case of adverse weather conditions the class may collect plankton from the pond located in the hydrophyte (water plants) house in the greenhouse or from another source. 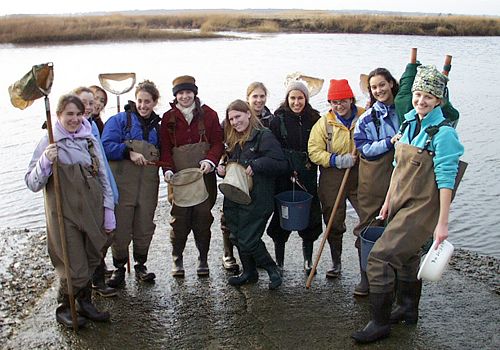 Observation and Identification of Collected Organisms

Prepared slides
Before you begin to observe your live specimens, you may want to look at the prepared microscope slides that are on your lab bench. It is much easier to observe fixed material than moving targets, but the detail you will observe in the living specimens is usually much more vivid, even when preserved specimens are stained to highlight their anatomy. Slides available include desmids, diatoms, Euglena, and Volvox (single-celled, autotrophic [self-feeding] protists, the last being a colonial form); Paramecium (familiar single-celled, heterotrophic [not self-feeding] protist); rotifers (tiny filter-feeders, among the smallest of the metazoans [multicellular animals). See Use of the Light Microscope below.

Begin by using your 4X objective (x 10X eyepiece = 40X total magnification), and then move up to the 10X objective (x 10X eyepiece = 100X total mag.). View the slide from the side, and slowly raise the stage until the objective lens is close to the slide, then focus away from the slide while viewing through the eyepieces. This avoids shattering slide and lens by improperly focusing down through the specimen! Those with eyeglasses should first try to view through the eyepieces without your glasses. You can also focus the eyepieces individually to adjust for left-right differences in eyesight.


Good microscope technique is not simply a matter of focusing. Efficient manipulation of lighting is essential to maximize contrast, which should always be your goal. The brightest lighting is seldom best. To maximize contrast (the resolution of details) while viewing your subject, adjust the light intensity and close down the iris diaphragm by moving the lever that controls its aperture on your sub-stage condenser. Let your instructor know if you are having trouble focusing the microscope, or maximizing contrast of your selected specimen.

Wet Slides
Examining the organisms you collected from the pond using both the dissecting scope and the compound scope:
Larger organisms:

To identify planktonic organisms you can use the BISC 111 web references, class handouts, and provided published guides to confirm your identification. In most cases, you should be able to get identification down to the genus level. To understand where your organism fits in the tree of life you will need to determine as many taxonomic levels of its classification as possible. Your textbook and a variety of websites will be useful. Links to some of these are provided below.

Use of the Light Microscope

Procedure for Using the Microscope