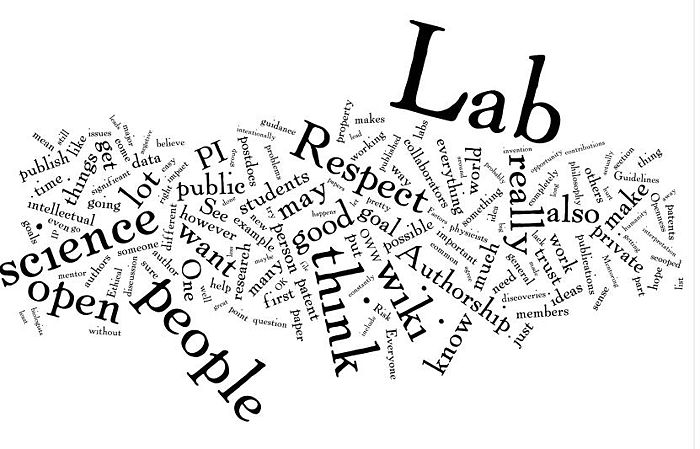 Steve Koch 23:39, 29 December 2008 (EST): On this page, I would like to work on our "Lab Principles" as a collaborative effort, including members of our lab and any others who have ideas. As of today, I am going to post my draft version of this document that I wrote on our private wiki (courtesy of OWW). It took me several hours to write the page, but it was pretty much stream of consciousness in a couple late night sittings. This was during the start of my second semester at UNM, almost two years ago, just shortly after joining OWW, and when my lab was still empty and students were just starting to join. It's a somewhat embarrassing but hopefully interesting snapshot into my thoughts about science, open science, and lab management. I feel like a different person now, a lot more experienced, a little more knowledgeable about open science, and a little less worried about open science.

In the spirit of openness, I will post the article pretty much as it's been posted in isolation on our private wiki...only fixing a minor typo here and there and fixing or adding hyperlinks. Once it looks people are ready to contribute, we can archive this embarrassing version and start fixing it up. Please make edits that you think we agree on, or post comments on the "talk" page. Also, if you'd prefer (or don't have OWW access), you can make comments on my blog.

By "Lab philosophy" I mean what are the general principles, ethics, and similar fuzzy issues that we all do or should agree on. These are things we should talk about a lot, but it's also essential to have this as part of the wiki, so new members and old members have a place to go to get internal guidance and also a place we can go to hash things out when something new comes up. At first here, I am going to put section headings for a few of the "hot button" issues that come up.

Currently there are a lot of "I" statements in this article. The goal will be to edit it as we dicuss the issues and over time convert them to "we statements". Be bold! If something here doesn't make sense or seems wrong, at a minimum bring it up either on the discussion page or in person!

What are the goals of our lab?

How open can we be?

Our general philosophy should be that we want to be as open and sharing as possible. But at least at first, we are not going to be completely open, for two major reasons that I have thought of:

What are people worried about anyway? Mostly, people are worried about getting "scooped." There are definite instances of scientists sharing their ideas before they've been published only to have a speedier, or more powerful lab steal the ideas and rush to publish first. Only slightly less weasely is when a group may not have stolen the idea, but rushes to publish first once they know that the other group is close to publishing. This has the following negative effects:

People are also worried about looking stupid. Personally, I am going to try to minimize how much I worry about this. So: I may look stupid sometimes, but I will be having fun doing science.

Those are all reasonable fears, but I hope we can be much more open than usual while at the same time minimizing some of those risks. My thinking is as follows:

If we as a lab act like this, then suppose someone completely underhandedly scoops us. A whole lot of people are going to KNOW that whoever did it were pretty much complete a-holes. And if this happens to one of my students or postdocs, I intend to be very aggressive in letting the whole community know what happened. Imagine, though, if we are very secretive and someone scoops us. Nobody would know or believe us! OK, now this doesn't eliminate the possibility that we can get scooped anyway, just by coincidence of someone working in parallel. If this happens, then we just have to cope with it. See OWW thoughts.

Openness on the wikis

There are some labs who have decided to put every part of their lab on the internet, for example, some on OWW. I think this is commendable and totally in the spirit of science. On the otherhand, I do think it is still experimental and while I believe it is very much in the right direction, I don't want to subject my students and collaborators to the experiment. Particularly since I am a new professor and we have so many other hurdles to cross. In some sense, having your lab 100% completely out in the open is like walking around naked. You probably really don't have anything surprising to hide, but on the other hand, you're uncomfortable doing it and most people aren't interested in seeing it. So, it doesn't hurt to wear some clothing. OK, brutal analogy, but I decided we should wear clothes in the lab and so we will have a private wiki and a public wiki. The adminstrators of OWW were very helpful in providing us the private wiki and their hopes are that it will facilitate us ultimately doing more open science.

The idea is for us to be very very open on our private wiki. As much information as possible should be put on the wiki and we should constantly look for ways to improve how we do this and make it easy to do so.

At first, the public wiki will include all of the regular stuff you see on most other lab's web pages. This is a good start. However, we will also have the goal of transfering private wiki material to the public wiki, once we feel it is in a form good enough to help the greater community. For example, "tips and tricks" or protocols that we use that are likely helpful to others. Brief little research results that we don't think we will bother to publish, or that won't be hurt by the Creative Commons licensing, (or that are too time critical to hold on to?). Another example: Everyone in the lab should discuss this "lab philosophy" page and improve it. It would be a scary but useful thing to post on our public wiki, I think.

Guidelines for transferring from private to public wiki

It would seem prudent that nothing major should be transferred (cut and paste) without all of us agreeing.

Guidelines for contributing directly to the public wiki

I for sure would like to see everyone in the lab (including me) contributing a lot to OpenWetWare and to our public wiki on it (without first posting it on the private wiki). So I don't want to discourage that. However, there could be tricky situations where two or more people are working on something and don't agree on how private to keep it. These things should be discussed openly and include me as well. I would bet that usually we can come to a sensible compromise. There is also the possibility that a student alone could have an earth-shattering idea and want to put it on OWW right away. I would suggest talking with me first, just in case there are negative impacts of being hasty.

Openness with people we really trust

I think we should be completely open with people we trust a lot. Like active collaborators, classmates, family, whomever. I know paranoid people who won't tell even trusted people "lab secrets" because they fear this trusted person will let it slip to the "enemy." Let's try not to be paranoid. For one thing, we are not working on nuclear secrets. Presumably if we get scooped at the very least it means that even though we got screwed, the world was bettered. Secondly, for the most part almost every scientist in the world is way too busy to pay attention to rumors he hears from some random person. I suppose there is the possiblity that some of us actually WILL work on something classified. Obviously "openness" does not apply to that. That kind of thing will be very rare I think.

Openness with the general public, face to face meetings

Again I think we should be as open as possible, more open than with the wiki, maybe not quite as open as with people we trust. The reason I say "not quite as open" is because everything we do affects each other. So we don't want to say or reveal things that obviously embarrass another lab member. Accidental embarrassment is fine. A related point: often you will want to edit what you say just because you don't want to confuse people that don't know you too well! Like I said somewhere else, giving the entire world access to your entire lab is like walking around naked: probably not very desirable to the people you're interacting with!

One really big problem with "open science" is the impact on intellectual property (IP) and ability to file patents. We should keep in tune with strategies people develop to deal with this. I really don't know the answer. Some thoughts:

This is one area we really need to talk a lot about. Most people think they are fine on ethics and that it's a pretty simple subject. This leads most PIs (in my opinion) to ignore the subject all together, which I then think leads to a lack of training on the younger people! It's not as simple as "don't fake data"--most people understand that one, but even that one has different meanings to some.

IMPORTANT The absence of mention of some kind of ethical question on these pages does not mean we condone it! We should add a discussion of it! Any ethical question should be hashed out somehow.

I tried looking this up in the dictionary and they didn't list the meaning I was thinking of. Then tried wikipedia(permalink) and see how complicated of a concept it is. Let's try this for starts:

After sketching out all of this about "respect," it seems to me that self-respect, respect of others, and respect of science are key to really all the other ethical areas. Without respect, how can we have trust, integrity, honesty, etc.? Doesn't seem possible.

We should hope that trust comes naturally. Trust will be easier with lots of mutual respect. Trust does not, however, mean that we won't make mistakes and that we won't constantly question everything: that is science! We just want to operate under the assumption that none of us are intentionally being deceitful. This needs to be talked about.

A culture of constantly questioning everything

I think respect also leads to this. If we really respect each other and we respect science, then it's really hard to choose not to question each other's work. We need to get really good at challenging everything, but doing it in a way that doesn't lead to nastiness. That's sort of challenging. But we will work at it. And it's the right thing to do.

Particularly if you are new to science, you may think that given how many papers are published each year (or even each day) and how long scientists have been publishing papers that the issue of "who is an author" would be worked out by now. Well, surprisingly it isn't! Not even close! Many different labs have different policies and most of the time they are not spelled out. Thankfully, most labs I think have a good PI who is fair and so things tend to work themselves out. Nevertheless significant problems, disagreements, and damaged relationships occur very frequently.

Here are some factors which make authorship problems worse

Here are some factors which can make authorship disuptes less common