Right is a possible "new look" for the main page. Please post your comments/suggestions. 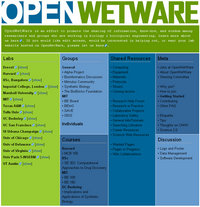 I think the community portal would benefit from a more organized structure and naming scheme to the discussions. For instance, every OWW-related page should be prefixed with OpenWetWare: as I mention on the Talk:Highlights page. Perhaps existing discussions could be merged as appropriate? Also, if we could make the community portal shorter with less text, that would help. Right now, there is too much text for people to read through. That being said, all the ongoing discussions that have been going on about OWW are great and unorganized discussion is better than no discussion!