OWW lab highlights. This is the first in a series of lab highlights identifying groups that are contributing to OpenWetWare. The first are the Insect Immunogenomics labs of Kafatos and Christophides at Imperial college London, UK. A selected list of publications can be found, along with protocols and lab member pages. A research summary is given below but more details can be found here. 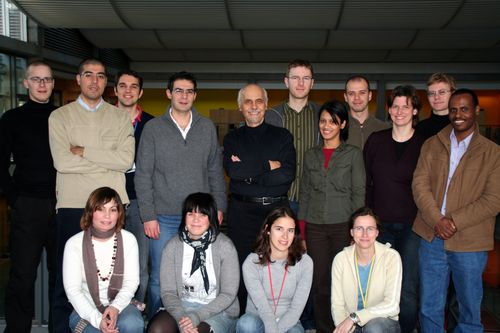 Our group studies the interactions between the malaria parasite Plasmodium and the mosquito, Anopheles gambiae. Molecular genetic studies on this socially important organism, a vector responsible for approximately two million deaths from malaria each year in Africa, capitalise on recent developments in genome analysis, RNA interference, transgenesis and the comparative study of innate immunity. We aim to trace and understand the immune responses of the mosquito to the parasite, through highly collaborative research, involving close interactions with laboratories in Europe, the USA and Africa.


Genomic characterisation of Anopheles is an important aspect of our studies. Previously, we have constructed detailed genetic and physical maps of A. gambiae, localizing genes that are involved in refractoriness to the parasite. In recent years, a combination of biochemical, molecular, cell biological, and genomic approaches has driven advanced studies of the Anopheles innate immune system and its reaction to Plasmodium infection. A landmark in these studies was the sequencing of the A. gambiae genome through the collaborative work of an international consortium, in which EMBL actively participated. A comparative genomic study of mosquito and fruit fly putative innate immunity genes led by our group established that immunity genes are substantially more diversified than the genome as a whole. This may have particular relevance to molecules involved in Plasmodium recognition and subsequent effects on malaria transmission. 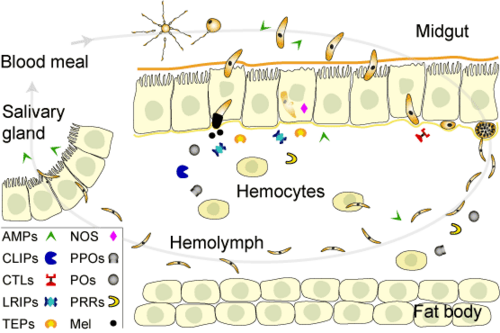 Interactions of the Plasmodium parasite with the Anopheles gambiae innate immune system during its development in the mosquito.

Insects and vertebrates share ancient, potent defence mechanisms of innate immunity. We are dissecting these mechanisms in the mosquito, and focus on those pertaining to parasite intrusion. To this effect, we have constructed DNA microarrays containing 20,000 ESTs and are developing microarrays covering the entire transcriptome. Initial analyses of global expression profiles of hemocyte-like cells and adult mosquitoes in response to a variety of immune challenges support the idea that sequence diversification is directly related to diversified functions of immunity genes. Importantly, the response to the malaria parasite overlaps extensively with the reaction to bacteria, but also encompasses additional genes.


Beyond gene identification and transcriptional profiling, robust genetic methods for functional analysis are required to determine the role of specific genes and to unravel the regulatory pathways in which they are involved. We have established the tTA/RtTA system to conditionally express genes in stably transformed mosquitoes, and also developed a single generation, in vivo RNA interference (RNAi) protocol as a rapid loss of function assay in adult mosquitoes. Using this powerful technique two mosquito immune proteins, TEP1 and LRIM1, were shown to kill the parasite in the insect’s gut. Two other proteins, CTL4 and CTLMA2, were identified to have the opposite effect, protecting the parasite as it develops in the mosquito. These studies have demonstrated that indeed survival or death of the parasite during its passage through the vector is crucially influenced by specific molecules encoded by the mosquito.

Future research will continue to address the genetic, genomic, molecular, and cellular mechanisms that permit the malaria parasite to develop within the mosquito.
We would like to improve high through-put genomic techniques to the point where we can use System Biology to model the Plasmodium-Anopheles interactions. Also, we aim to take our research to the field and expand our experience in population genomics.