The purpose of this assignment was to use and observe an already created modeling system to see how it is structured and how it follows the definition of a model as previously defined in class. These definitions can also be found in the Week 2 Class Journal. This assignment also helps us determine what we think is important and not important when creating a model by determining the best and most frustrating aspects of working with this program.

Part A: Select for Red

Part B: Select for White

The purpose of this assignment was to observe a modeling program and to identify key characteristics that are common to all models. We made these observations on a program created by Aipotu. Our group worked specifically with their Evolution module and supporting instructions. The purpose of that module is to observe Hardy Weinberg Equilibrium with red and white flowers in which color was determined by a single gene. The program took us through several different scenarios where we manipulated relative fitness and the starting population of organisms (red and/or white organisms). The program allows us to manually adjust relative fitness, which adjusted how many organisms of different colors we started with, and how the allele and genotype frequencies were affected throughout different generations. It also provided us with some information about the genetic make up of the organism by providing small colored rectangles in the top right corner of each organism signifying the color of each of the alleles in the organism. 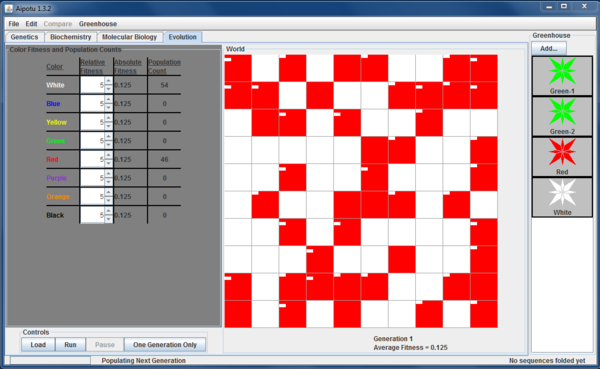 The program that we used had a great interface and was easily manipulated for different scenarios. I found the model itself to be intuitive to read with exception of the genotypes of each organism. When showing the colors of each allele for each organism, the alleles often just blended in with the color of the organism since there was no border around the alleles. This functionality of the model made it difficult to discern what the genotypes were until I played around with the program longer and made some guesses about what was happening. Aside from that difficulty, I found the program to easily understood, and think it was a great example of a modeling program.

No files were created as a part of this assignment.

Thank you to Colin Wikholm and Courtney Merriam for collaborating with me on this assignment. While I worked with the people noted above, this individual journal entry was completed by me and not copied from another source.