This lecture is about the opening of epoxides a surprisingly important aspect of organic synthesis.

The Opening of Epoxides

An epoxide is a strained ring system that can be opened by a large range of nucleophiles. Epoxides may easily be made from double bonds. Though reactive, they can be isolated and handled easily.

Scheme 1: The Opening of Epoxides

As you can see, the simple mode of epoxide opening involves a reaction like an SN2 mechanism, except in this case the "leaving group" oxygen is still attached to the molecule. So one of the carbons (where the nucleophile attacks) will be inverted and the other will stay unchanged.

We need to examine two cases. The first is where the epoxide carbons are substituted. The second is when the epoxide is part of a ring.

When we combine an epoxide with a reactive nucleophile, and if the two carbons of the epoxide are differently substituted, then the choice of which carbon the nucleophile goes for is typically determined by the same factors as for SN2 reactions. So attack is quicker at primary centres, slower at secondary centres and virtually non-existent at tertiary centres. When there is a preference between different reaction sites on the same molecule that involve similar chemistry we say there is regioselectivity, or that the steric crowding of the substitutents causes regiocontrol. (If there is a choice between two different functional groups we say there is chemoselectivity). 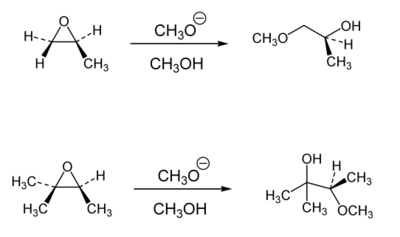 Scheme 2: The Direct Opening of Epoxides, when there is a Choice of Reactive Site

Things change when the epoxide is activated by acid. The epoxide oxygen protonates first (fast, and reversibly) and the epoxide then opens. Again primary is faster than secondary: 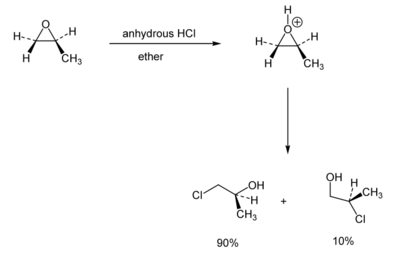 (Here the nucleophile is the chloride ion left over from the HCl) But when tertiary is present, that reacts very quickly. Because the highly substituted tertiary position is able to stabilise a growing partial positive charge, we think of the epoxide opening a little. The mechanism is a little like a combination of SN1 and SN2. Regiocontrol is rarely absolute, but you should expect the major product to be formed from attack of the nucleophile at the more substituted carbon. 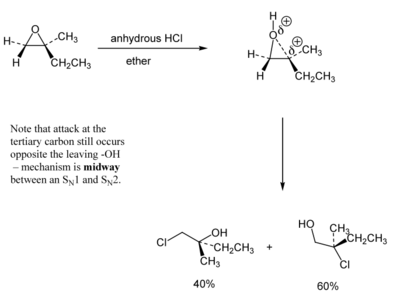 Scheme 4: But Tertiary Centres are Attacked Quicker when Acid is Present

Implicit in the above mechanisms is that the incoming nucleophile breaks the C-O bond of the epoxide by an SN2-like mechanism, i.e. approach is from the rear of the bond. In cyclic cases, there is remarkably strong regiocontrol that at first sight looks very odd:

Scheme 5: Regiocontrol in Opening of Epoxides on Cyclohexane Rings

Based on what we've previously said about axial and equatorial substituents, and that equatorial substituents are favoured (all other things being equal) you might think that this epoxide opening is being driven by the formation of equatorial substituents. That's sensible and logical. In fact if you look at the product from the above reaction, the two new substituents are both axial. There's something going on here that we're overlooking. Let's draw out the two immediately-formed products from attack at the two positions. To do that we draw the cyclic epoxide - it's rather like drawing a cyclohexene from lecture 6, but the epoxide is on one face of the ring or the other. The incoming chloride has to come in from the bottom face (opposite the epoxide oxygen). As it does so the carbon to which it is attaching itself effectively moves down to meet it, so as to give a tetrahedral centre. 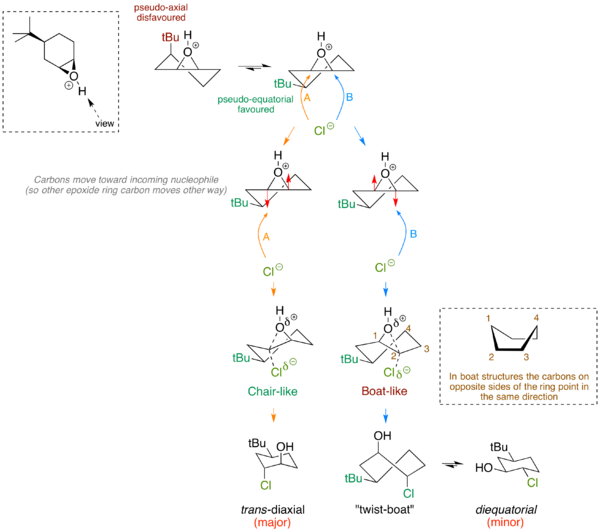 Scheme 6: High Energy Pathways through the Twist-boat Intermediate are Responsible for the Regiocontrol

The pathway that is not observed goes via a cyclohexane structure that is high in energy - a twist-boat. Jonathan Goodman at Cambridge has already embedded a Jmol applet of this here you can play with - notice the differences in shape from the chair, both in terms of sterics and eclipsed C-H bonds on adjacent carbons. It's a high energy conformation of cyclohexane (about 20-25 kJ mol-1 higher than the chair (with a correspondingly larger barrier to get there). So even though the product observed is less stable than the other regioisomer, it is formed by a lower energy pathway that avoids the twist-boat. This is an example of a more interesting energy diagram where the two possible reaction trajectories cross and we observe the kinetic rather than the thermodynamic product. 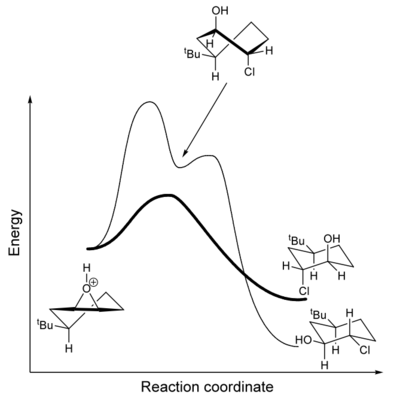 Scheme 7: The Twist-boat Intermediate is a High Energy Intermediate, though would Lead to the Thermodynamic Product

Notice a subtlety of that energy diagram. The reverse reaction from the trans diaxial product back to the epoxide has a much lower energy barrier than does the reverse reaction from the diequatorial product. That makes sense if you think about the geometry of the groups in what is an internal SN2 displacement - the axial OH can easily reach the rear lobe of the C-Cl σ* orbital, which is impossible in the equatorial case.

Scheme 8: Reversibility of the Ring Opening - Epoxide Formation Easier for the Diaxial Product