This lecture is about the SN2' Mechanism and we will look at some past papers.

The allylic position is the one next to a double bond, not on it (which is the vinylic position). Substitution there by an SN2 mechanism is fast - much faster than the corresponding alkyl compound.

We're not meant to be talking about this, but the reason the substitution is faster at an allylic position is interesting. The effect is quite dramatic - allylic substitution is typically 100 x faster than substitution on an alkyl ("aliphatic") chain. The fact that the reaction is faster implies that the transition state is being stabilised by the adjacent π bond of the double bond. The transition state of an SN2 reaction has two partial bonds - one from the incoming nucleophile and one from the leaving group. These two partial bonds "derived from mixing a filled and a vacant orbital can be regarded as having to some extent the character of both. This means that stabilising delocalisation should be available from both electron donor and vacant orbitals" as Tony Kirby puts it very eloquently in Stereoelectronic Effects (section 5.3). 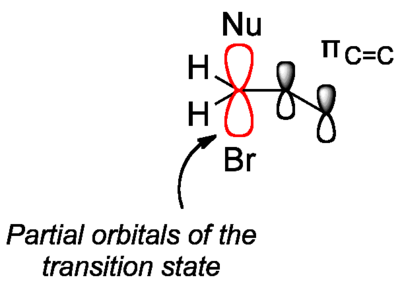 The same kind of thing happens at benzylic centres. According to Kirby's idea, both electron withdrawing and donating substituents on the aromatic ring should accelerate benzylic displacements, and this is actually the case. Very cool. Interestingly displacements next to carbonyl groups are also accelerated, but in those cases it's the carbonyl π* that's interacting with the transition state. Anyway, you don't need to know this.

We need to return to the allylic substitution. There will be times when the regular SN2 displacement does not happen, for example when SN1 might be favoured (if the reaction is in a polar solvent which is good at stabilising the cation). But imagine we're in a non-polar solvent and we have a starting material where the regular displacement site (where the leaving group is attached) is sterically congested. It turns out you can easily get displacement through attack of the nucleophile at the end of the double bond. This is the SN2' (say "SN2 prime") mechanism that you need to know and deploy at appropriate moments. 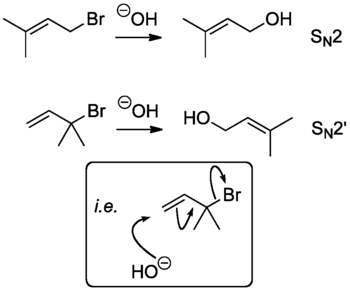 In general, where there is a choice of reaction site, an incoming nucleophile will be guided by sterics - i.e. in the case of prenyl chloride, below, the direct SN2 reaction will be favoured over the SN2' reaction because the former site is a lot less crowded than the latter. If things are not quite so clear cut (second example in the figure) then you should start to see mixtures of products. Is there a way to override this natural (steric-based) tendency? There are reagents you can use that will tend to favour the SN2' mechanism. These tend to be based on copper organometallic species (generally used for conjugate addition - here's a very nice explainer from a student at Harvard). Things like Gilman Reagents have been used, but below is an example of something called a Yamamoto Reagent (here's the paper) that displays a very strong preference for the SN2' mechanism - you might turn your mind to thinking of a reason why it's so good at doing this. Notice that the two reactions shown strongly suggest that the SN2' operates, and that there is no stepwise reaction via some radical or cationic intermediate, since then you would get mixtures of products, presumably. 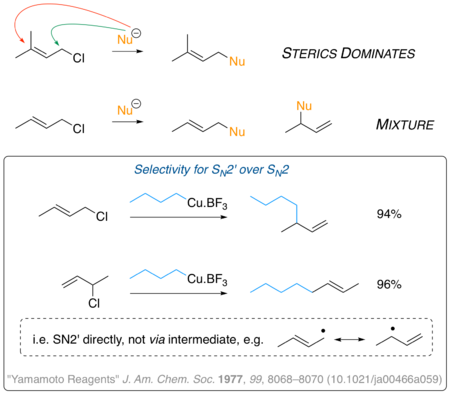 Notice in all these examples we're using allyl chlorides. Things are a little different for allyl bromides in the sense that bromide is a much better leaving group than choride, meaning that allyl bromide isomers are often found to be in dynamic equilibria under laboratory conditions. For prenyl bromide (below) the position of equilibrium very much favours the primary isomer (more substituted double bond) but for crotyl bromide things are a little more even, and there's a significant amount of the minor isomer present. The major is present as a mixture of the two double bond isomers. We need to be aware of such equlibria when predicting how such compounds will react! (Important Note: the numbers here are taken from Clayden, Greeves and Warren. I'm still searching for a good source for the numbers in the peer-reviewed literature, if anyone has any suggestions?) 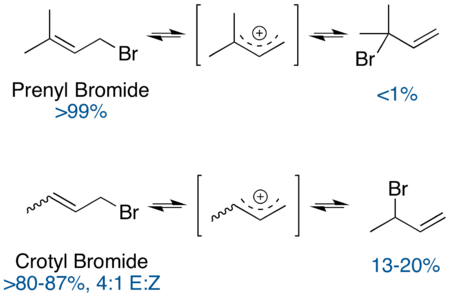 Stereochemistry of the SN2' Reaction in Cyclic Systems

Cyclohexenes are quite common, and you need to be able to draw mechanisms involving such structures. If we examine SN2' reactions in cyclic cases it turns out that the reactions proceed either with the incoming nucleophile from the same face of the ring that the leaving group was on (syn) or from the opposite side (anti). So in any given case, we get a major and a minor product, but which we get varies depending on the leaving group and nucleophile. Here's an example where the outcome changes depending on the nucleophile.

Scheme 5: Syn vs Anti products in the SN2' Reaction of Cyclohexenes

You might think that the outcome would depend on the chair/boat/ringflip issues we originally went through with cyclohexanes. Well, in cyclohexenes, the ring, while locked by that bulky substituent, is quite flat around the double bond and we don't have a great deal of difference between the two faces of the double bond. So there isn't a clear reason why one approach should be favoured in any given instance - it's not very well understood (unless someone knows better).

Take a look at the way these are drawn, and how the bulky substituent is equatorial in the starting material, and "pseudoequatorial" in the product. We'll come back to drawings like this. There are other cases where the approach direction really matters.