A sulfur atom in the 2-position of an alkyl halide greatly increases the reactivity of that alkyl halide.

Scheme 1: Effect of a Sulfur Atom in the 2-Position of an Alkyl Chloride

This is not terribly surprising when you realise that S is a good nucleophile. Though we give these kinds of influences the fancy name of neighbouring group participation (NGP) or anchimeric assistance, keep in mind it's just intramolecular nucleophilic attack. The reaction goes through a high energy intermmediate (a sulfonium ion), and you might want to pause and think what that will mean in terms of its rate behaviour and whether this is an SN1 or SN2 reaction. 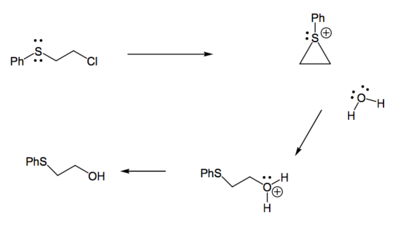 Scheme 2: Role of the Sulfur Atom in NGP

These kinds of structures (2-chlorothioethers) are sometimes called mustard gases, and were used with terrible effect as chemical weapons in World War I. The sulfonium ion can react with many biomolecules, yet if it reacts with water it produces HCl which can burn and blister the skin. This is an unusual example - chemistry is typically a Force for Good.

Besides effects on rates of reactions, NGP has very considerable influence on reaction stereochemistry, which we'll now look at.

What Happens in a Simple Case

If we imagine a molecule that could display NGP, but for some reason did not, then a regular SN2 nucleophilic displacement would go with inversion of configuration. Obviously the diastereomer of the starting material behaves the same way. 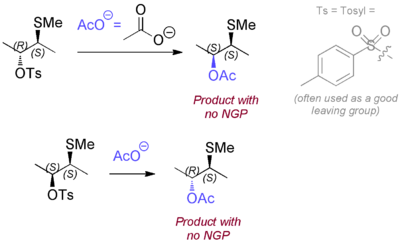 In fact what happens is this: 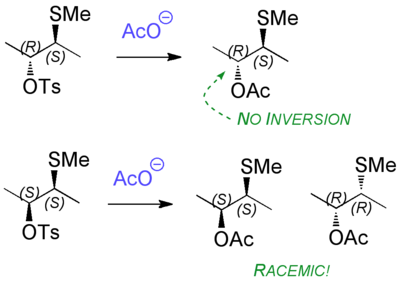 Whatever you do, don't memorize this. We need to look at the mechanism, when everything will become clear and obvious.

Let's take the top example first, and redraw the molecule so that the internal nucleophile (SMe) is antiperiplanar to the tosylate, since this is the geometry required if there is going to be NGP.

Now let's do the internal displacement, and draw the sulfonium ion in each case. Like any regular SN2 reaction (which this is not, because there's only one molecule involved, but the idea is the same) there is inversion at the centre where the attack happens. 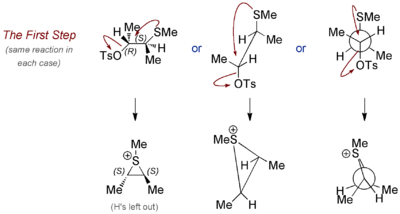 Notice how the intermediate has a kind of symmetry - it's chiral, but has an axis of rotational symmetry. The molecule is C2 symmetric, which is an important kind of symmetry in organic chemistry. The upshot is that it doesn't matter where the acetate attacks, the end result will be the same molecule. But let's make sure: 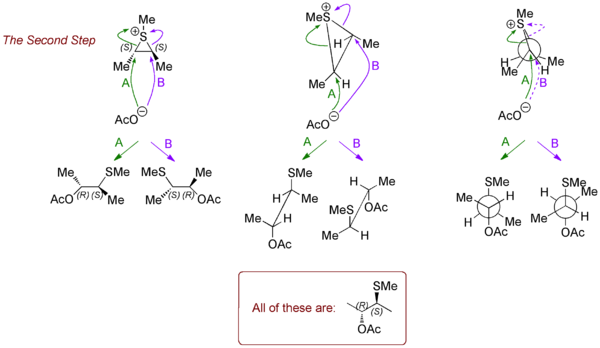 Now let's look at the other diastereomer of the starting material and see why the outcome is so different. Running through the same analysis, we arrive at intermediates that look similar, but which have a different kind of symmetry. Now it matters which carbon the incoming acetate goes for. There won't be a preference for one rather than the other because... the intermediate is achiral - it's meso - something you came across in first year. There are still stereocentres, but the molecule overall is achiral. 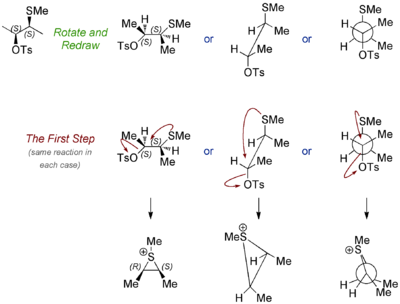 When the acetate attacks at the two different carbons, we produce two enantiomeric products (in equal amounts, hence a racemate overall). 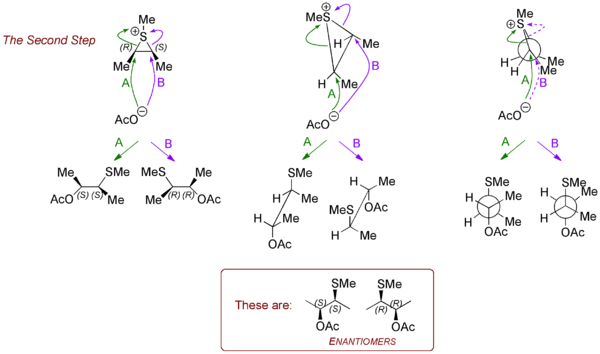 So this has been a rather lengthy worked example to show how important it is to include NGP participation in your analysis of a reaction. We've analyzed an example where sulfur is the group responsible for the NGP, but there are others that can do the same thing, such as groups based on oxygen, nitrogen and even aromatic rings, giving oxonium, nitronium and phenonium ions as intermediates. 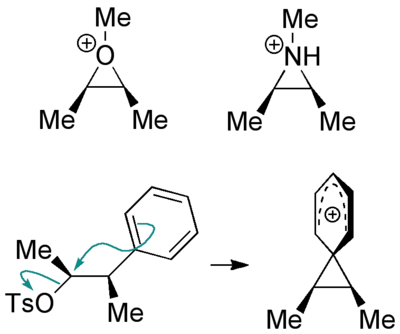 Scheme 10: Other Groups can Effect NGP

Another Common Example of NGP - Displacement on Rings

A nice example that ties together a few things we've now met is shown below. Try to figure out what's going on - specifically why the enantiomerically pure product becomes a racemate, and why the starting material diastereomer reacts much more slowly (does it, in fact, react with the same mechanism?) 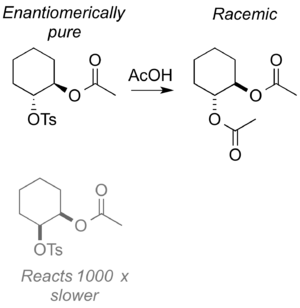 Scheme 11: A Common Example of NGP: Displacements on Aliphatic Rings

(These reactions are discussed very nicely in Clayden Chapter 36 and Anslyn&Dougherty Chapter 11.)

An Example Without Lone Pairs

See if you can use NGP to explain the result below - the rate changes and the stereochemical outcome. Think about the C-O antibonding orbital and stabilisation of the developing positive charge as the reaction proceeds. If you find yourself drawing an exotic-looking intermediate fear not - the structure of this species (the "norbornenyl cation" - a so-called "non-classical carbocation") has been the subject of a dispute for decades. 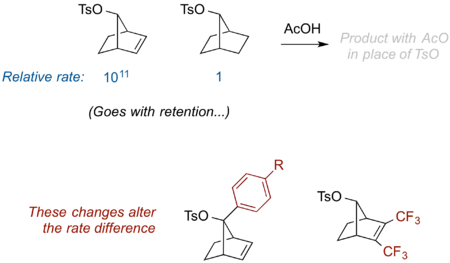 This is an example where an adjacent double bond is involved in NGP. So you don't need a group with a lone pair for NGP - we saw that above with the formation of the phenonium ion.

Older Nomenclature You Ought to be Aware of

Three-dimensional diagrams like the ones above are perfect for showing what's happening in chemical reactions. An older way of talking about such processes is still quite common, but in my view much less useful than people think. What you do is as follows. Take your molecule, and draw the long carbon chain as a single vertical line. For each carbon draw the substituents horizontally. The lines are drawn as single lines, but the way the atoms are arranged is that the vertical lines are "down" and the horizontal lines are "up". If there is a difference between the carbons at the end of the vertical line for the backbone, the upper one is the most oxidised. Take a simple example - glyceraldehyde.

So we draw the molecule with the wedged bonds, and then we can abbreviate using the non-wedged bonds. These abbreviations are called Fischer Projections and work because we understand the convention that the vertical lines are going away from us in space, and the horizontal lines are coming towards us. These projections are named after the chemist Emil Fischer. Now when we talk of slightly more complex molecules where there are more stereocentres, there's another piece of nomenclature you will hear. The names are derived from a naturally occurring molecule erythrose and its diastereomer threose. When drawn as Fischer projections they look like this. 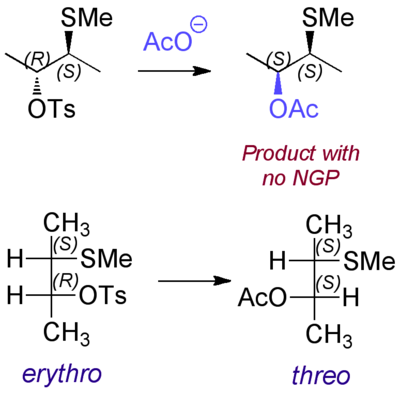 One of the reasons I don't like the Fischer representation is that when drawing the molecule in this way you need to picture the molecule with the long chain of the hydrocarbon backbone "bent back" on itself, which is not how we ought to be thinking about it. I'd strongly recommend using a regular 3-D representation with wedged bonds. I won't examine you on Fischer projections.