This is a general lecture on mechanisms, molecular orbitals and reactive intermediates.


(Back to the main teaching page)

Why do we Study Reaction Mechanisms?

A reaction mechanism is the detail of how/why one molecule becomes another. Why do we care? Three reasons:

1) Truth - even if a reaction is well-behaved, we're human being and like to understand the universe.

2) Complexity - in many cases reactions do unexpected things. Reactions never "don't work" - they either give back unreacted starting material, give the expected product, give something else, or give mixtures of things. Frequently we want to understand reaction mechanisms so we can understand complex reaction outcomes - the "Why did that happen?" question. 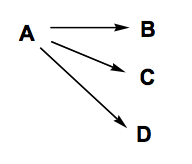 3) Prediction - if we understand reaction mechanisms we can start to make intelligent predictions about how to make new reactions work.

Scheme 3: A New Reaction for which we need to Predict Reagents and Conditions

In this lecture we'll talk about the standard polar organic reactions that you've seen already.

Mechanism of the SN2 Reaction Revisited

We all remember the SN2 reaction, where bond formation and breaking occurs in a single rate-limiting step. The HOMO in the examples below is the lone pair in an sp orbital on the hydroxide O, while the LUMO is the σ* orbital of the C-I bond.

Focussing on the frontier orbitals (the HOMOs and LUMOs) gives a reason for the inversion of stereochemistry that is observed when this reaction takes place. 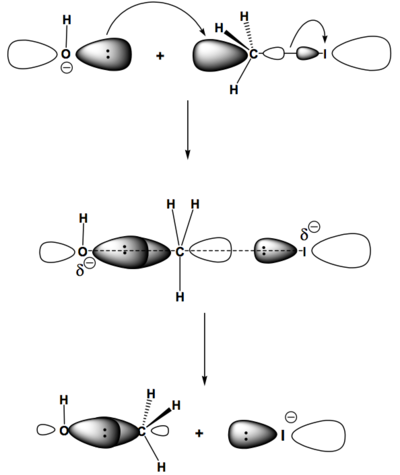 Note that just based on the frontier orbitals, the nucleophile could in theory attack the iodine end of the molecule here, but the whole process is higher in energy. 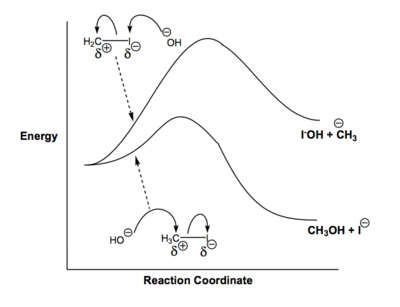 Scheme 8: Energy Profile for the SN2 Reaction for both the Actual Reaction and an Alternative

And we can prove all this (backside attack and no intermediates) by using an enantiopure substrate - an SN2 reaction gives an enantiopure inverted product in the following sequence. 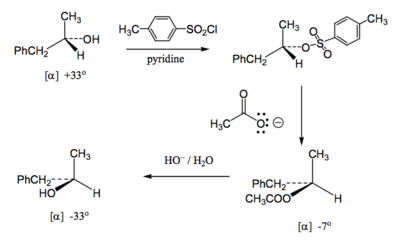 Scheme 9: Inversion of Configuration Observed in a Real SN2 Reaction

Mechanism of the SN1 Reaction Revisited

Some evidence for a planar (achiral) intermediate in the SN1 reaction comes from the scrambling of the stereochemistry. 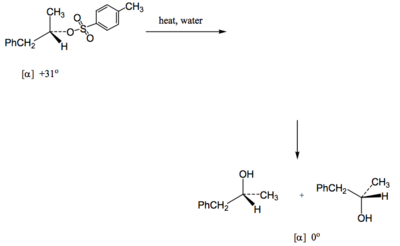 The energy profile for this reaction includes an intermediate - i.e. a local energy minimum referring to a theoretically isolable species. The intermediate is the carbocation 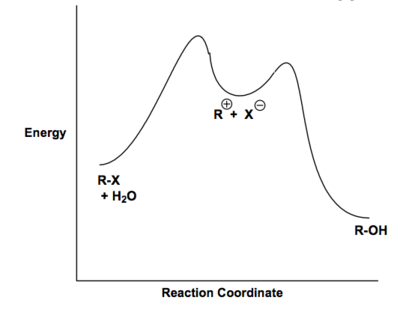 When we consider factors that promote an SN1 reaction we are allowed to consider things that stabilise the carbocation. Note that this is an approximation - what we ought to be doing is considering things that stabilise the transition state leading to the carbocation. The Hammond Postulate tells us that because the carbocation is fairly high in energy compared to the species either side, the transition states will resemble the carbocation itself. What factors favour SN1 processes? Obvious things like polar solvents, adjacent π systems and adjacent lone pairs. Adjacent carbonyl groups do not - it turns out the only orbital that can interact with the carbocation is the C=O π* orbital, but since these are both empty there is no stabilization.

Example of Differing Outcomes Based on Stereospecific Reactions and Conformational Effects

Here's a problem you can work through - explain the different outcomes here, being careful to explain the stereochemical outcomes. The silver reagent encourages departure of the bromine atom, without making it happen outright. I got this from Eliel's Stereochemistry of Organic Compounds, which in turn used data from this paper.

Scheme 11a: A problem for you, involving stereospecificity and conformational effects

Take an enantiopure alkyl halide and make a Grignard out of it and you will be sorely disappointed in the enantiomeric excess of the product of your reaction with that Grignard.

Scheme 12: Formation of a Grignard Gives a Racemate in the Reaction Product

Carbanions don't (usually) retain their stereochemical integrity, which is kind of annoying actually.

The same thing holds for many carbanions, particularly if the charge is somehow stabilized. 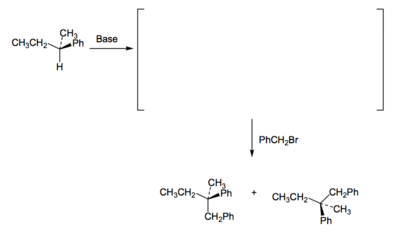 Making chiral Grignards (i.e. where the reagents retain their stereochemical integrity and can be used in synthesis) is still the source of much research activity - for example in this paper where one of the enantioenriched Grignard reagents was found to be OK at room temperature for about 30 minutes.

The same thing applies for radicals - we lose stereochemical intergrity when we form a radical from an enantiopure compound (if the radical is at the stereocentre).

...because the intermediate radical is essentially planar. 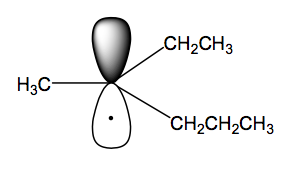 Scheme 16: Planarity of Alkyl Radicals, Though Actually Most are Pyramidal

Well, that's the simple story, which should be your take home message. In fact things are not so simple. Here's a recent computational study and paper on the shape of the t-butyl radical, which will tend to adopt a pyramidal structure, but where there is a very low barrier to inversion, meaning we can almost treat it as planar. Here's some original computational work on this. It turns out that most alkyl radicals are pyramidal, except the methyl radical (CH3·) which is planar.