This lecture is about conformations of cyclohexanes.


(Back to the main teaching page)

cis and trans refer to Relative Stereochemistry. Nothing to do with Ring Flipping

We need to be clear on one thing from the outset. cis and trans isomers do not interconvert - they are separate structures that are configurational isomers (diastereomers). It's not like you can convert one to the other with a ring flip. Here are the cis and trans isomers of 1,2-dimethylcyclohexane.

Scheme 2: Conformations of the cis Diastereomers of 1,2-Dimethylcyclohexane

Scheme 3: Conformations of the trans Diastereomers of 1,2-Dimethylcyclohexane

How much is it favoured? Quite a lot. The relevant clashes are shown below. The cis case is shown for comparison purposes, but is less important here because the two ring-flipped conformations have the same clashes. For the trans isomers the clashes are a mix of 1,3-diaxial interactions and gauche methyl clashes. The diequatorial conformation is favoured by over 11 kJ mol-1.

Scheme 4: The Energetic Costs of Various Clashes in cis and trans 1,2-Dimethylcyclohexane

Assuming equilibrium at room temperature, and remembering that ΔE = -RTlnK, we can generate a curve a little like this one: 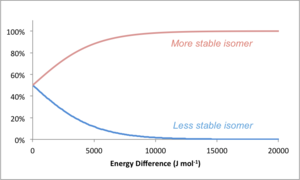 Scheme 5: Proportion of Isomers at Equilibrium as a Function of the Energy Difference Between Them. Image taken from Figshare

...which shows that the diequatorial conformation is massively favoured under normal circumstances. We can't forget about the diaxial conformation. It's still there, just not very common.

Look at the two chair conformations of cis-1,2-dimethylcyclohexane. They're enantiomers. Does that mean this compound is chiral? No - the two conformations interconvert rapidly under normal conditions and we can't separate them. Incidentally they interconvert via a meso boat form.

It's easier to see that the cis isomer is achiral with the 2D diagram, because there's an obvious plane of symmetry running through the molecule, but it's important also to be able to reach the same conclusion using a more grown-up 3D analysis of the molecule. 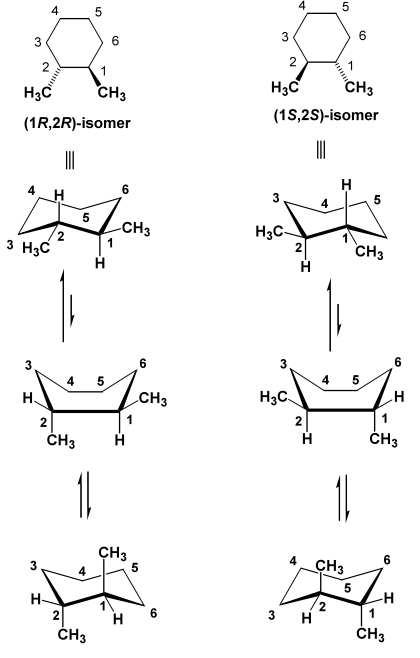 ...and this is the preferred conformation of cis-1-tert-butyl-4-methylcyclohexane - notice how the tert butyl group is locking the conformation. Draw this molecule in 2D (i.e. with wedges).

Influence of Substituents and Double Bonds

Exact geometries and shapes of cyclohexanes will depend on substituents. We've seen how bulky groups like tert-butyl groups can strongly bias the conformation of a ring, but often the conformation adopted can be influenced by many factors. A nice example of this is shown in the Scheme 10, described in Anslyn and Dougherty but originally published in this paper, in which a hydrogen bond occurs between two adjacent alcohol groups when the alcohols are both equatorial, but when this happens, a bulky isopropyl group on the other side of the ring is forced axial. The actual conformation will be a result of the competition of these two factors, and the experimentally-determined position of equilibrium was in this case used as a measure of the strength of a hydrogen bond.

Scheme 10: The Influence of Substituents on Ring Conformations

We will shortly look at cyclohexenes, where a double bond is contained in the ring, but you should expect such rings to adopt geometries that are strongly influenced by the double bond, given the geometric requirements for orbital overlap in the double bond. Given factors such as these, you should not expect molecules like Tamiflu (oseltamivir) to adopt overly-simple chair-based conformations. Knowledge of the molecule's preferred conformation is important if we are to understand its abilities as a medicine, i.e. how it interacts with its target.

When two cyclohexane rings share an edge we have a decalin.

Again, we can have cis and trans isomers that do not interconvert, no matter how much ring flipping etc you try to do.

Drawing the preferred conformation of the trans fused system is straightforward. Both rings are chairs. The small Hs go axial, leaving the bulkier carbon chains to be equatorial. 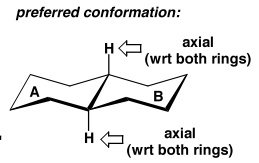 (but actually you can't do ring flipping in this compound - can you see why?)

Drawing the cis can give people nightmares, but stay calm and you'll be fine. Draw one ring. Take the two leftmost carbons and draw an axial C-C bond down and an equatorial C-C bond. That starts you on the second ring, which then also needs to come out chair-like, and it's often easier to draw that in if you rotate your page (or your mind, or both) to see that second ring as a chair.

Why do we care about decalins? One of the most important classes of natural molecules, the steroids, have these structures in them. They are synthesised by an extraordinarily cool reaction, and the resulting shape of the molecule is partly determined by the fact that these trans ring junctions are a little more stable than the cis, all other things being equal. Look at the following structures to see if you are happy that the 2D drawings imply the 3D structures and vice versa. 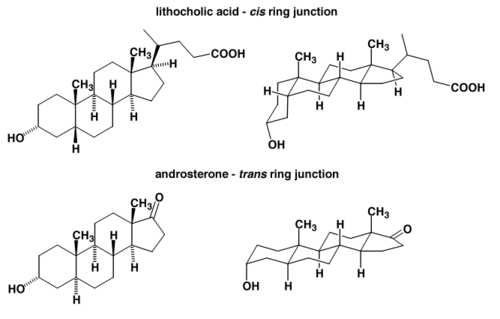 In cyclohexane there is rapid ring-flipping that interconverts axial and equatorial protons so a single averaged peak is observed in the 1H NMR spectra - i.e. we don't observe the "isolated" conformations and the NMR spectra are simpler than we might expect. If we cool our sample a lot, we should be able to slow down the interconversion. So as the temperature goes down, our signals might broaden, and then at a sufficiently low temperature we might start to see separate signals for axial and equatorial protons.

For simply substituted cyclohexanes, where there is substantial movement of the molecule, we see chemical shifts and coupling constants that are a weighted average of those for all conformations of the molecule. If, however, the conformation is "locked" by big substituent, or if ring flipping is somehow prevented (e.g. in a trans-decalin system) then we start to see detailed coupling constants for individual protons arising from a single conformation.

The coupling constants we see in a molecule's 1H NMR spectra reveal a fair amount about its molecular structure, because the size of the J value depends on how well the relevant orbitals are overlapping. 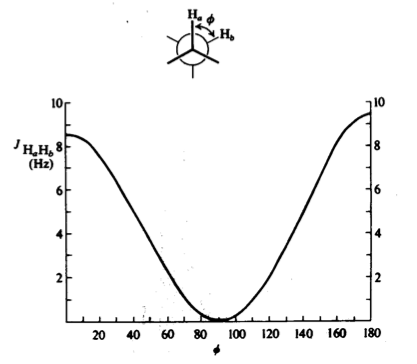 Scheme 16: Coupling Constants Depend on the Geometry of Orbital Overlap, i.e. the Dihedral Angle Between the Bonds

In cyclohexanes where we can see such detail, the J value for a coupling between two axial protons is large, with the other possible geometries giving rise to much smaller coupling constants.

Scheme 17: Typical J Values for Hs on Adjacent Carbons of a Cyclohexane Ring

An Exercise in 1H NMR Spectroscopy of a Locked, Substituted Cyclohexane

For the proton attached to the same carbon as the acetoxy group (the 1-position), check that the signals shown below make sense.

Scheme 19: The Signal for the 1-Proton in the 1H NMR Spectra of the two Menthyl Derivatives