This lecture is about elimination reactions.

An elimination reaction is where a small molecule leaves a carbon-containing molecule via the generation of a double bond.

Scheme 1: General Definition of an Elimination

We will consider three mechanisms. They differ in the sequence of loss of the two components.

The X- leaves first, giving a carbocation, which then loses a proton to give the double bond. Rate limiting step is initial loss of anion. Hence rate only depends on concentration of starting material.

This mechanism is promoted when the intermediate carbocation is stable, e.g. when the carbocation is highly substituted, or in an allylic/benzylic position, or stabilised by an adjacent heteroatom. You've probably seen a very common example of E1 elimination where tertiary alcohols give alkenes in the presence of acid. 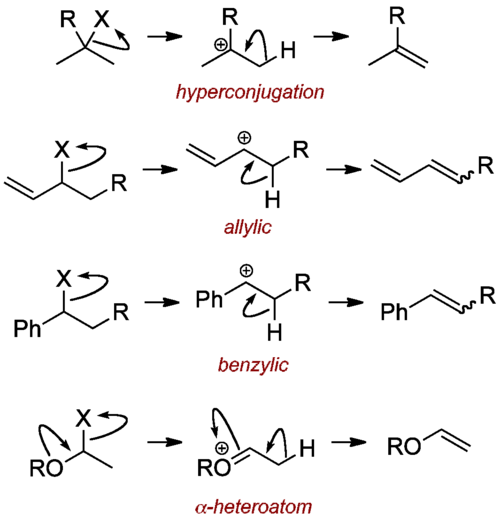 Scheme 3: Groups that are Good at Eliminating with an E1 Mechanism

These substrates could also eliminate via an E2 mechanism (which we'll do in a minute) - it's just a question of selectivity. There is also usually a possibility of substitution reactions in many reactions. We just have to keep this in mind. As a rule of thumb we often see more elimination rather than substitution at higher temperatures.

Other groups are either less likely to react E1 or are unable to do so: 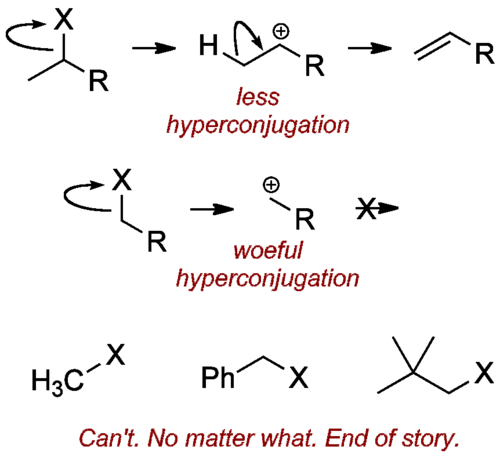 Scheme 3: Groups that are Less Good at Eliminating with an E1 Mechanism 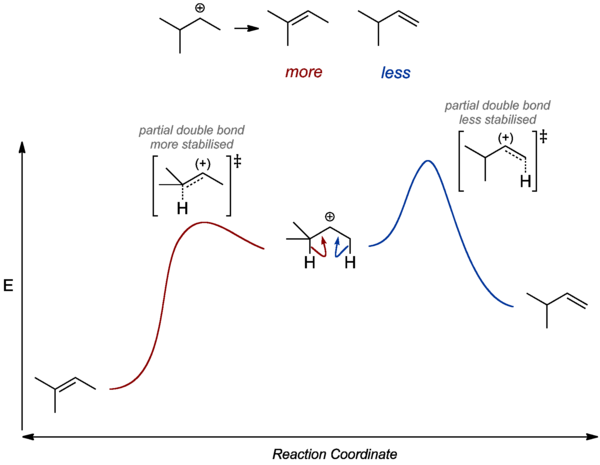 Scheme 4: E1 Gives More Substituted Double Bonds Where there is a Choice

There is also a stereochemical issue we ought to address. E1 will tend to give E rather than Z products. Here we appeal to the difference in energies of the intermediate carbocations that must form (a steric argument) and extrapolate to the stabilities of the transition states going to the relevant products. 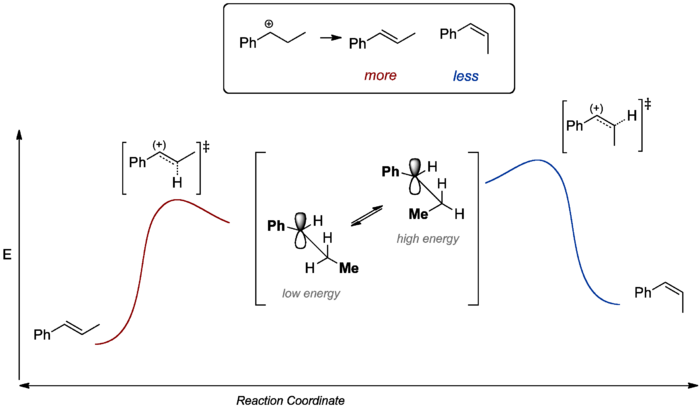 Scheme 5: E1 Gives E-isomers of Double Bonds Where there is a Choice

H+ and X- leave at the same time. We draw in a base as part of the reaction mechanism, which abstracts a proton. E2 processes will be favoured by strong bases (which are weak nucleophiles). We have seen this reaction in the elimination of hydrogen halides (dehydrohalogenation).

The one key thing about E2 reaction mechanisms is that the H and X groups must be antiperiplanar (APP) to eliminate. In acyclic systems that means a productive E2 reaction will only occur when the groups are in the right orientation. In cyclic systems in can mean some E2 reactions can't proceed if no appropriate APP arrangement is possible. 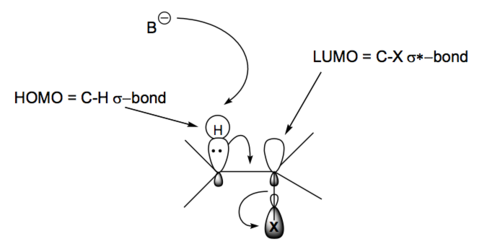 Scheme 7: The Antiperiplanar Geometry of the E2 Reaction Mechanism

This neatly allows us to bring up the concepts of stereoselectivity and stereospecificity. Let's look at a stereoselective E2 elimination. In the case below there is a choice of which conformer of the starting material undergoes the E2 reaction. Both Newman projections show an APP arrangement of the groups involved in the elimination, but one is sterically less crowded than the other, so we obtain one product selectively. None are forbidden on orbital grounds. 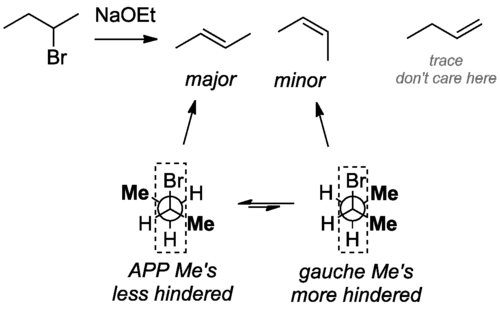 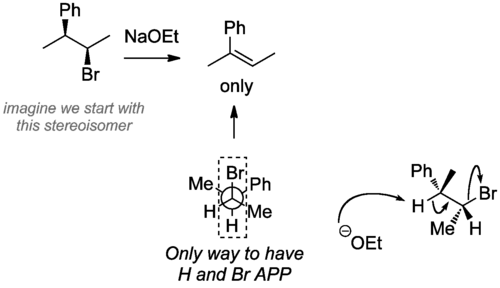 For cyclic systems, one may have to use a ring flip to orient groups in an APP arrangement suitable for E2 elimination. That may be possible, depending on what else is on the ring, of course.

Scheme 10: An E2 Reaction in a Cyclic System

There are times when syn elimination becomes competitive. Below are three cases, described and explained in Anslyn and Dougherty (Chapter 10). See if you can see reasons why syn elimination might be occurring. 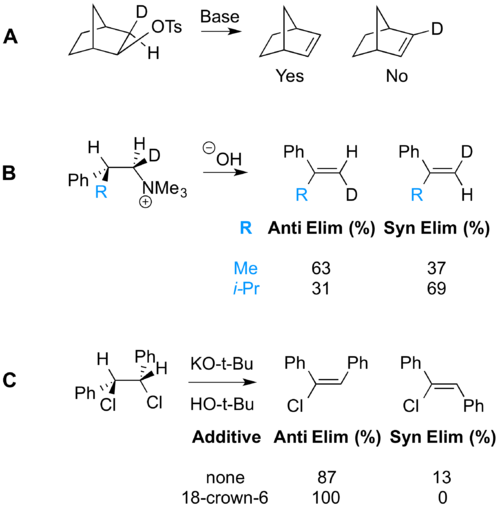 Compared to E1 and E2 this mechanism is less important, but it has its moments. The idea is that H+ is abstracted by the base first (reversibly) to give a carbanion, which then loses X- - see the boxed part of the scheme below. Obviously this mechanism can happen when stabilised carbanions can form. There is one set of compounds where this happens a lot, and which is important in synthesis and biochemistry, namely β-hydroxy carbonyl compounds, which you've seen as the products of the aldol reaction. 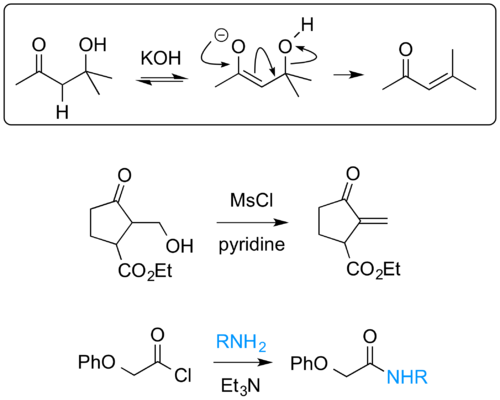 Clayden has a couple of nice examples, shown above, of E1cB in action (Chapter 17). See if you can work out the mechanism. The second example is harder than the first.