This lecture is about additions to cyclohexenes again, specifically how to add water the wrong way round, and how to convert a double bond to a diol.

Mercury diacetate will add to double bonds in a way not dissimilar to bromine addition. The mercurinium ion intermediate is like the bromonium ion we saw earlier, and can be opened by water. If we are using a familiar cycohexene ring, we will see the trans diaxial product being favoured. If the alkene is not symmetrically substituted, the more substituted position is attacked by water (as we say with bromonium ions and acid-catalysed epoxide opening) since that position is best able to stabilise a developing partial positive charge. The C-Hg bond in the intermediate product can be converted to a C-H bond with a reducing agent. If we employ NaBD4 as the reducing agent, we can observe that the reduction goes with retention of stereochemistry. You don't need to know why. But you should ask yourself why. 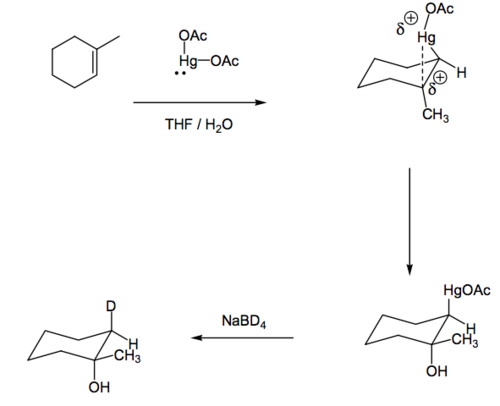 So the initial addition will be trans, given the nature of the intermediate. The overall addition follows Markovnikov because the OH ends up on the more hindered position. You should therefore ask yourself an obvious question.

The stereochemistry of the addition is something that should by now be quite simple, given that we've seen such similar cases with bromination and epoxide opening. Here is, in any case, an example that you can check for correctness.

Hydroboration is extremely common in organic synthesis, for a number of reasons, not least of which is that we can do anti-Markovnikov addition of water across a double bond, i.e. end up with the OH on the less substituted carbon. This is possible because of the boron reagent we use, which is typically some variant of borane (BH3). In practice borane is so reactive that we tame it a little in the lab by using it in a solvent that reversibly coordinates a pair of electrons to boron's empty p orbital. Just for interests's sake, borane is made from a reactive gas called diborane which is itself made from a reduction of BF3. You don't need to know that. When you encounter borane in the lab, it'll be as the BH3-ether adduct. For the purposes of thinking about what borane does in a reaction, we ignore the ether, and just focus on the BH3. 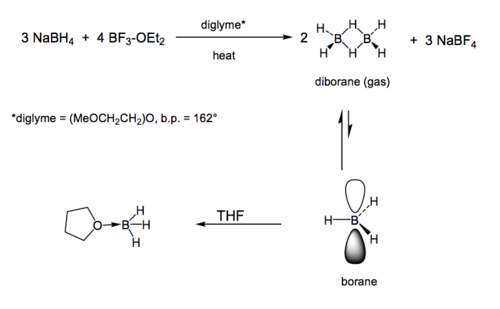 The basic idea of hydroboration is that each B-H bond adds across a double bond, i.e. the B ends up on one carbon and the H ends up on the other. BH3 has three such bonds, so will react three times, or thrice if you will. A stable intermediate is generated, which we don't usually want, so it is typical for the second step to involve an oxidation in the presence of basic hydrogen peroxide to give the alcohol of our starting material, plus a boric acid byproduct that we dispose of in the aqueous phase of our reaction work up. The general result, on the most simple level, is again hydration of the double bond. We now need to look at why this reaction is used so much, and what the mechanism might be.

The first thing to note is that the B-H adds cis across a double bond in a concerted process that does not give rise to any isolable boron-containing intermediates. The first product we see is the addition product with H on one carbon of what was the double bond and B on the other. Both B and H have been added to the same face of the double bond. We draw this as a series of lines in a square indicating that bond formation and breakage is occurring at the same time. The second thing to note is that the B has become attached to the less substituted carbon of what was the double bond. This is important. Upon aqueous oxidative work-up, the B is replaced by OH, meaning that the end result is OH attached to what was the less substituted carbon of the double bond. This is anti-Markovnikov addition, therefore, meaning that hydroboration is a useful alternative to oxymercuration. There are two reasons for this regioselectivity: i) Steric - that the boron-containing part of the reagent is larger than the H being added, so will tend to avoid the sterically more demainding end of the double bond, and ii) Electronic - that the more substituted position on the double bond will tend to better stabilise a growing positive charge that forms as the double bond breaks and donates its charge to the vacant boron p orbital. The third thing to note is that when the B is replaced by O in the oxidative step there is retention of configuration, i.e. that the O is attached to the carbon with the same connectivity as the B was. 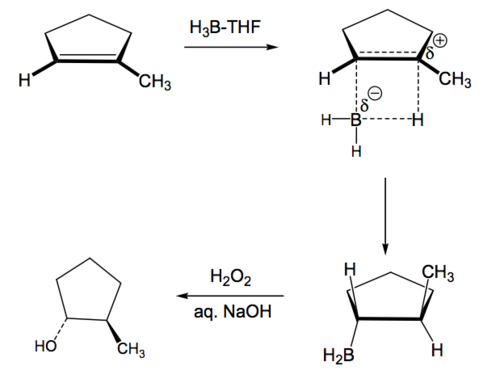 (Anslyn and Dougherty have the first step as donation of the π electrons to boron to give a π-complex, which then collapses to the addition product. If I ask you about this reaction mechanism, use the one in Scheme 5)

We need to look at that final step a bit more, because the retention of stereochemistry is strange-looking. When the final boron-containing product is formed it consists of three B-C bonds, plus a vacant p orbital on boron, to which the hydroperoxide adds. The intermediate boronate has a negative charge on boron. The attached carbon-containing groups can migrate to oxygen while ejecting hydroxide from what was the hydroperoxide. Once this happens twice more, we have our expected alcohol products attached to boron through the oxygens, and a simple basic hydrolysis will lead to the isolable alcohols and boric acid. It's that migration step that allows for the retention of stereochemistry. Thus the combination of anti-Markovnikov selectivity and stereochemical control in the conversion of an alkene to an alcohol explain why hydroboration is so useful and widely used in synthesis.

Scheme 6: Mechanism of Conversion of Boronation Product to Alcohol

As with the other reactions we have seen, it's important to be able to work through an example and accurately describe the stereochemistry of all the intermediates, as well as perceive what is the overall outcome of the reaction.

Scheme 7: Worked Example of the Stereochemical Outcome of a Hydroboration Reaction

Naturally since we're playing with drawings on paper, this is currently an academic exercise, but if you were asked to synthesise an important biologically-relevant alcohol on a ton scale for a major pharmaceutical company, you'd want to get the stereochemistry right to avoid shame and embarrassment. Here's venlafaxine, an antidepressant. It's made by Pfizer and sells over 3 billion dollars per year. You'd want to make sure that alcohol ends up in the tertiary position, not the secondary position next door. For quetiapine, an antipsychotic sold by AstraZeneca for nearly 6 billion dollars a year, you're going to want to make sure that primary alcohol is the one you end up with and not the secondary alcohol you'd get if the OH was attached to the adjacent position.

Scheme 8: Alcohol Groups in the Billion-dollar Drugs Quetiapine and Venlafaxine

You might also want to think about something else. In all the cases above, we've had to consider borane approaching the upper and lower faces of the double bond with equal likelihood. It'd be nice to be able to control that, so that we don't keep on ending up with racemates. Try to think of a way we might be able to achieve that.

This is easy. The metal catalyst, which activates the hydrogen to addition to the double bond, is a surface, meaning both H's are delivered to the same side of the double bond - cis addition. Also very useful synthetically. You might want to think about how you might achieve the opposite, where H's are delivered from opposite faces. I won't ask you this in your exam.

It's also relatively straighforward to convert an alkene into a diol, or more formally a 1,2-diol (or vicinal diol) since the OH's are on each of the carbons that formed the double bond. Overall this is an oxidation process (whereas hydration is not oxidising or reducing overall). The reagent that has historically been used for this reaction the most is an exceptionally toxic and unpleasant material that neverthless does the job well, osmium tetroxide. An intermediate is formed (an osmate ester) containing a five-membered ring and where the two oxygens have become attached to the same face of the double bond. A subsequent hydrolysis step breaks the Os-O bonds and not the C-O bonds, which means the stereochemistry of the osmate ester is preserved in the diol. Sometimes a reducing agent like sodium hydrogensulfite (shown) is added to this step to help with the removal of the osmium at the end. 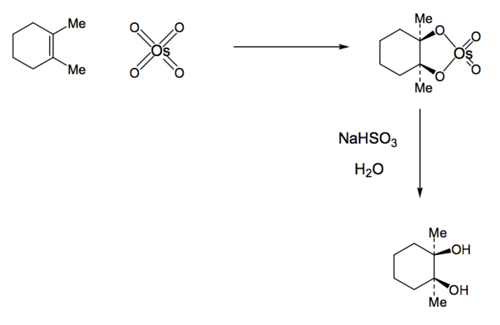 If you were given this reaction to do, and you noted that the reagent was potentially fatal if inhaled, and that it's a volatile solid, your mind might turn to a simple way of dramatically improving this process.