(additional authors - add alphabetically. Please consider adding yourself and helping to write this paper, particularly if you have already helped out over at the relevant Synaptic Leap pages here and here).

The enantioselective synthesis of the important drug praziquantel (PZQ) is described employing the racemate as the starting material. PZQ's stereocentre is destroyed by an oxidation reaction and is selectively reconstructed through catalytic asymmetric hydrogenation. The unusual geometry of the enamide intermediate prevents effective interaction with most catalysts employed. Alteration of groups flanking the enamide lead to different outcomes from the hydrogenation which have been rationalised by molecular modeling.

Praziquantel (PZQ) is an important drug used in the worldwide treatment of schistosomiasis (Bilharziosis).[ref] The racemate is universally employed even though it is known that the inactive (S)-enantiomer causes side effects and is responsible for the pill's bitter taste. PZQ remains the only viable drug for the treatment of this burdensome disease, and it is important that the drug is used in a way that postpones any possible development of resistance; one possible treatment regime would be to increase the dose administered while reducing the current large pill size. The World Health Organisation deemed the generation of enantiopure (R)-PZQ to be an important strategic objective. Recently a method was found for the resolution of PZQ that is efficient and inexpensive. Neverthless, despite being economically viable, resolution processes are chemically inefficient in that half the material is discarded and new steps are introduced that covert PZQ to an amine that may be resolved. It was of interest to determine whether asymmetric catalysis might provide a solution to the exclusive synthesis of (R)-PZQ.
PZQ has been synthesised previously using a catalytic, asymmetric approach involving a synthetic intermediate that is not currently employed on a large scale, and the efficiency of the asymmetric step was low.[ref] One obvious possibility is to adapt a known synthesis of PZQ that employs a Pictet-Spengler reaction[ref] but unfortunately such a reaction, employing an aromatic ring lacking electron-donating groups, has never been carried out asymmetrically in the 100-year history of the Pictet-Spengler reaction. A remaining possibility would be to start from rac-PZQ, destroy the stereocentre with an oxidation, then re-install it with an asymmetric hydrogenation.

Enamides have attracted enormous interest in recent years as important building blocks for the synthesis of various important intermediates and also in the asymmetric synthesis of medicinally useful compounds. The asymmetric hydrogenation of enamides is one of the most heavily-used industrial asymmetric transformations; there are many examples of this reaction being used in the synthesis of important drug molecules and active pharmaceutical intermediates. This reaction therefore seemed to be an excellent choice for the inexpensive production of (R)-PZQ, were it possible to transform the racemic drug into the PZQ-enamide. Such a strategy would be formally a stereoablative strategy since the stereocentre is destroyed and recreated.
Here we start from the racemate and employ stereoablation, since asymmetric hydrogenation is the most efficient catalytic, asymmetric process with wide employment in process scale synthesis.
No literature precedence for the successful catalytic asymmetric hydrogenation of enamides with this geometry.
Project was initiated and run using a mixture of open source and contract research.
Relevant recent review of asymm hydrog 10.1039/c2cs15312b.

Oxidation of Praziquantel to the PZQ Enamide

Known reaction. Gives a reasonable yield, and has been partly optimised.
We began our attempt at the stereoablative synthesis of (R)-PZQ by converting racemic PZQ into enamide. The reaction involves oxidation at the benzylic stereocentre to generate an achiral product. Initial efforts to carry out this transformation using copper (I) chloride in dry DMF (120 oC, 16 h) did not give the desired product, and only returned the starting material. Similarly heating in DMF with sulfur (120 oC, 24 h) also gave no conversion. However when the reaction was carried out using a literature procedure with two equivalents of elemental sulfur, where the sulfur and rac-PZQ solids were simply melted under solvent free conditions for 15 minutes, a dark brown oil was obtained. The desired enamide could be obtained from this mixture by flash column chromatography in 63% yield. The product was recrystallised from diethyl ether to give the enamide as colourless needles.
Other oxidants.
Question of whether we see rotamers, comparison with PZQ, and whether this matters.

The outcome of the attempted asymmetric hydrogenation of the PZQ enamide was very different to the benzoyl derivative when (conditions) were employed. In the former, there was no conversion. From the mechanism typically invoked for such processes, this would seem to imply the rhodium centre is unable to coordinate the double bond for delivery of the hydrogen.


To understand these differences, ab initio calculations were employed. Three model enamide structures were evaluated in complexation with a model of a chiral rhodium complex. Enamide 1 was used to approximate a typical structure known to be reduced well be a number of the catalysts assayed. Enamide 2 was used to approximate the PZQ enamide and enamide 3 as a model of the benzoyl enamide. 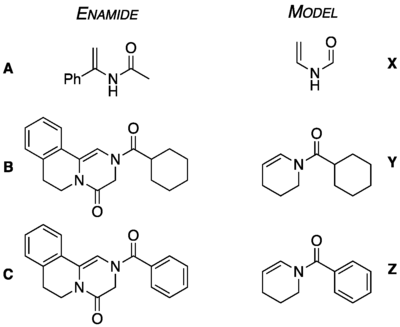 Scheme X. Structures Employed in the Modeling of Enamides

When these enamides were allowed to interact with a the model rhodium system (after the rate-determining hydrogen insertion step, but the precursor to hydrogen transfer to the double bond), the PZQ enamide case behaved very differently from the other two model systems. Clear evidence of Rh-C bonding was observed in the latter, but poor olefin-Rh interaction was observed for the PZQ enamide, as can be seen from the large Rh-C distances and lack of any apparent lengthening of the bond between the two carbons of the double bond.


The amide in the enamide prefers to be planar to maximise orbital interaction between the lone pair in what was the non-bonding p-orbital on the nitrogen sp2 centre and the carbonyl pi* orbital. Geometrically this prevents interaction between the double bond and the rhodium centre. For there to be such an interaction, the substituents on the amide nitrogen must move towards the rhodium centre, converting the nitrogen atom into a more pyrmaidalized centre rather than a planar one. This reduces the effectiveness of the amide orbital interactions. Such movement would normally be considerably unfavourable, and explain the lack of interaction in the case of the PZQ-enamide. The benzoyl enamide, however, appears to be able to undergo such a distortion, and compensate for it through a new interaction on the other side of the amide. The aromatic ring has changed its alignment to allow a greater degree of overlap between the aromatic pi system and the carbonyl pi* orbital (dihedral angles in red). Presumably it is this compensation that allows the molecule, as a whole, to interact with the rhodium to give a productive hydrogenation reaction.

Scheme X. Key Bond Angles and Distances in the Interaction Between Model Enamides and a Rhodium Complex. Values in parentheses are those after interaction with the complex

We thank Sigma Aldrich for a donation of several catalyst ligands at the outset of this project. 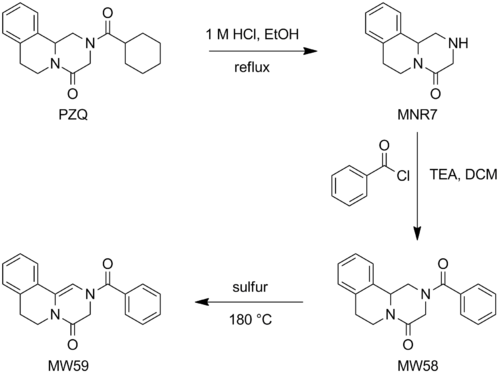 Procedure:
Step 1 - Hydrolysis of rac-PZQ - link to online lab book
rac-PZQ (13.0 g, 41.6 mmol) was dissolved in a mixture of EtOH (80 mL) and 1M HCl (420 mL) and heated to reflux for 14 h. The solution was allowed to cool to room temperature then cooled in an ice bath, basified with NaOH pellet (approx 22 g, pellets used to minimise volume of aqueous material) to pH 12-13 and extracted with DCM (4 x 150 mL). The organic fractions were combined, dried over magnesium sulphate, filtered and concentrated under reduced pressure to give a clear oil which was placed on the high vac for 4 hours by which time the oil had crystallised into white crystals

The reaction was repeated in two batches

Recrystallised in toluene:hexane (9:1) and left in the freezer overnight. Crystals filtered off in the morning and washed with hexane.


Step 2 - N-benzoylation of rac-PZQamine - link to online lab book
To an ice-cooled solution of rac-PZQamine (3.23 g, 16.0 mmol) and triethylamine (2.43g, 24.0 mmol) in DCM (60 mL) was added benzoyl chloride (2.80 mL, 24.0 mmol) and the solution was stirred at room temperature for 15 hours. The reaction was quenched with water and stirred for a further 30 minutes. The mixture was neutralised with sodium hydrogen carbonate solution and the layers were separated. The organic layer was washed with sodium hydrogen carbonate solution and dried over magnesium sulfate. After evaporation of the solvent a yellow solid remained.

These will vary, but are described here and the conditions are also listed in the Overall Results Spreadsheet: please enter new data directly - email Murray or Mat for access rights.

Standard density functional theory calculations were carried out with the GAUSSIAN 09 program. Geometries were obtained at the B3-LYP level of theory with the 6-31G(d) basis set. The vibrational frequencies of stationary points were inspected to ensure that they corresponded to minima on the potential energy surface. Improved relative energies were obtained at the M06-2X level with the 6-311+G(3df,2p) basis set. Zero-point vibrational energies, thermal corrections to enthalpy and entropies were obtained using B3-LYP/6-31G(d) harmonic vibrational frequencies, scaled using appropriate literature scale factors. We account for the effect of solvation using the SMD continuum model with CH2Cl2 parameters. Energies in the text correspond to relative free energies at 298 K.

(May be found in the public Mendeley group here, but should also be listed below. Direct links or DOIs in addition to citation please)