This week you will spend nearly all of our lecture and studio time specifying these aspects of your project:

If there are outstanding issues related to the system overview for your project be sure everyone on your team knows how you'll solve the issue(s) and make a plan to come to studio tomorrow with materials for finishing the system overview and getting good work done on the device list and the timing diagram.

You will have time to polish up any leftover work on this aspect of your project once we have introduced device lists and timing diagrams.

Consider again the coliform project from the Melbourne 2007 iGEM team. The team listed six devices they needed to realize their idea:

Working with your project team at the white boards,

After 15 minutes of work, we'll have each team report back to the group, and then you can spend the rest of today's studio time working on a device list and timing diagram for your own project. 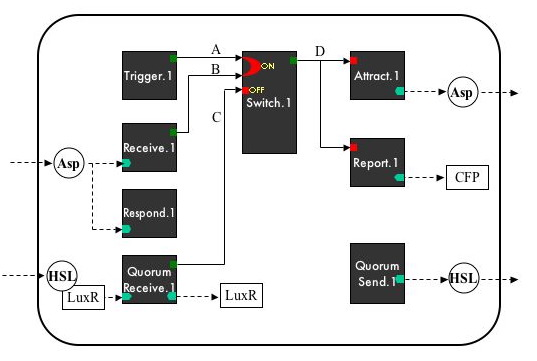 As much as we'd all like to have unlimited amounts of time and funding, few of us do. Let's warm up for today's lecture-time work with two quick conversion challenges.

Spring Break has just passed but who wouldn't mind another getaway. Maybe even for just a day--skip classes on Friday and come back late Saturday. All of Sunday to catch up. Hmm. Delta has a direct flight to Bermuda. Kayak.com....

Airfare alone is $371. Should I take the T or a cab to Logan? Take 10 minutes to decide as a group if you'd travel by T or taxi to the airport. Be sure to keep track of your reasons that favor one or make you disinclined to the other. After 10 minutes of work on this challenge, we'll hear the choice and the top 2 reasons from each group.

Part 2: better to be lucky than good? 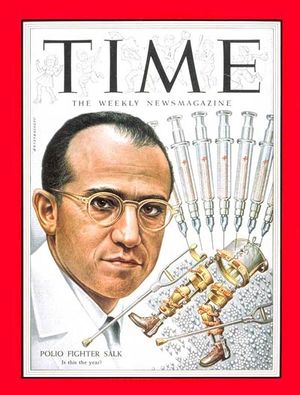 Jonas Salk/Time magazine cover
Some people seem destined to be in the right place at the right time. There are businessmen, military heroes, and celebrities whose good personal outcomes seem best explained as lucky alignments of stars and planets. Critically good timing was a strength of Jonas Salk, who is commonly credited as the scientist responsible for the polio vaccine. As profiled in Time Magazine, Jonas Salk was "strictly a kitchen chemist (who) never had an original idea in his life," according to Albert Sabin one of "the other" men credited for conquering polio. How can timing be related to cost of launching a project? In Salk's case, his ability to offer a killed-virus as a polio vaccine was wholly enabled by John Ender's discovery of effective culturing techniques for the polio virus itself.


Consider once more the Melbourne 2007 iGEM project. In a series of questions at the end of their presentation, the team gets asked about any changes to the gas vesicles device that might allow gas-filled cells to become even more buoyant. Their answer speaks to some scientific work others have done to understand the vesicle-encoding operon , research that has shown at least one gene in the operon is a negative regulator. By deleting that gene, the Melbourne team thinks they might make their cells even more buoyant. If you and your team were the Melbourne team, what would you do with this information?
Here are some options. You can consider these or others, but weigh them in terms of their associated cost (both time and money).

After 10 minutes we will hear back from each group about their preferred strategy for optimizing time and money.

Now it's time to look at the list of devices you have identified as part of your project (some of you may have a full list of needed devices and some of you will have only a partial list, in which case you'll have to consider these ideas now and then revisit them when your device list is complete). What might factor into the cost and time of assembling the devices into your working system? Do you know all you need to know about how they work? Are there easy ways to find out more? Do the devices already exist or will you have to make them yourself? You might want to make a chart that lists your degree of confidence in each device, where confidence is tempered by its cost/time/source/description and perhaps safety/security concerns...something we will return to next week.
Generate a list or table that might be useful as part of your Tech Spec Review next week.