From OpenWetWare
(Redirected from IGEM:IMPERIAL/2007/Biofilm Detector)
Jump to navigationJump to search

Biofilms are a huge problem in medicine and in industry. The dispersal of biofilms has long posed a problem to biologists, chemists, and engineers. Our project is based on the detection and possibly destruction of bacterial biofilms that are formed on catheters. To detect biofilms, we aim to use a cell free approach, as it was thought that using bacteria to detect biofilms might result in biofilm forming on the catheters, if traces of the detector are not cleaned properly. We will also characterise the detector system within the cell free system and in vesicles and compare them to the detector system in E. coli.


Detection of biofilms will be done using the lux system. We will simulate the presence of biofilms by AHL producing E. coli. The sensitivity of the lux promoter under different conditions (concentration of AHL and temperature) will be assayed by a fluorescent reporter. The detection system will be implemented and tested in E coli, in vitro and in veso. Hrp system may also be incorporated into the system to amplify the fluorescent output, as it is thought that the vessicles may reduce the synthesis of the fluorescent protein.

Our plan is to make the basic construct of the detector system and test it in the three chassis mentioned above. The results can then be compared to determine the best chassis for the system. For each chassis, the system will be tested for: 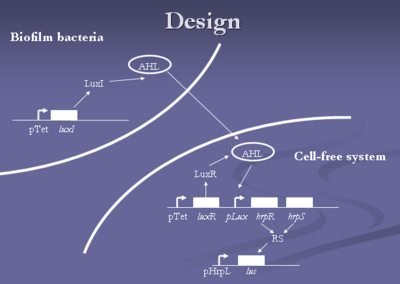 We will also test atleast two reporters with our system and the final design would have the reporter best suited to our requirements. The reporter we need must:

Different reporters and their advantages and disadvantages can be found here

The AHL will intially be induced directly into the detector solution for each of the experiment, to verify that the system responds to it. Later the AHL can be introduced into the system by creating a signalling system within an E coli. To fully test the system for its application, the detector needs to be tested on a biofilm. For this purpose a biofilm might be grown in the lab, but this test will only be carried out of time allows it. Figure 1 on the right shows the final infector detector construct.


To improve the efficiency of the detector, HRP may be incorporated into the design. The HRP system will not only work to amplify the output signal but also increase the repsonse time of the system. This stage can only be completed after the HRP system has been fully characterised.


Improved life expectancy of the global population plays a major role in the rising demand for all medical catheters. Over a 100 different types of catheters are available on the market at the moment; involved amongst others in infusion, cardiovascular, renal, haemodynamic monitoring and neurological contexts.

Catheters, specifically central venous catheters (CVCs), are responsible for more device-related infections than any other "internal" medical device. As an illustration, catheter-related blood stream infections (CRBSIs) are both common and costly. Approximately 3 million central lines are placed in the United States each year; resulting in 150,000 cases of CRBSIs annually. In addition, 90% of all CRBSIs occur in clinical situations in which a temporary central venous catheter was used. The cost of treating CRBSIs annually in the United States ranges from $300 million to $2 billion a year.

Detection methods (EM and TEM) indicate their presence both on their outside surface and inner lumen. Colonization and consequent biofilm formation may occur within 3 days. On a shorter scale, within 10 days, biofilm is more extensive; longer-term (up to 30 days) catheters exhibit greater biofilm formation internally. Current detection methods involve the so-called roll-plate technique: (details?). This method, however, is unable to detect the presence of organisms on the inner luminal surface, and its sensitivity is insufficient: not more than 1000 CFU per tip.

The proposed system would involve detection of biofilm formation on the outer surface of the catheter. Its presence would be displayed by way of fluorescence. However, the system could potentially be extended to incorporate an eradication mechanism, exploiting the degradatory protein, DspB.

Biofilms and your health...

This page needs to be re-written.