It is necessary to test the Infector Detector system in an environment similar to that of its intended operation, if not in the environment itself. It was found that biofilms can be modelled by a gel with pore size of 80nm and fiber thickness of 0.6nm[1]. Agar gel, prepared at a concentration of 2% by weight has approximately these properties[2]. As a preliminary experiment, the viability of agar films and the variability of measurements as a result of their preparation procedure were studied.

It was found that the way the agar is loaded into the wells in the fluorometer plate can affect the results if the loading is not carried out quickly and in such a way that avoids bubbles and ensures complete covering of the bottom of the well.

When using cell extract with Plux construct over the AHL containing agar, if the film contains no bubbles and covers the entire bottom of the well, then it is likely that the results obtained will be accurate enough to plot expression over time for different AHL concentrations. However, even if there is variation in film shape and coverage from well to well, it will probably still be possible to obtain a binary result (expression, or no expression).

The natural progression from this experiment is to attempt expression of GFP, using cell extract containing LuxR and the Plux construct, over agar films containing different concentrations of AHL. 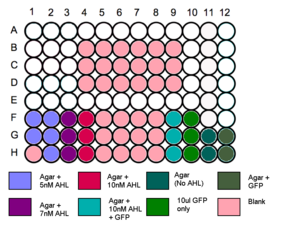 An agar gel was prepared at a concentration of 2% (by weight) and with AHL dissolved at different concentrations (3nM, 5nM, 7nM, 10nM). At all times, a water bath at 65°C was used to prevent the gel from setting before it was loaded into the fluorometer plate. 40μl of these gel samples were then pipetted into wells in a 96-well fluorometer plate, according to the diagram on the right. Three of the 10nM AHL agar containing wells were further treated, after setting, with 10μl of 10x diluted stock GFP solution. Additionally, control wells were set up containing: agar without AHL; agar without AHL and with GFP; GFP only; and blanks (empty wells).

The surface tension between plastic and molten agar solution makes it difficult to pipette and spread the gel at the bottom of the wells. Therefore, at least two wells were loaded with each sample, in order to determine the variability of measurements as a result of the well-loading procedure.

Similarly, three wells were loaded only with 10μl of GFP solution. The small volume of the solution made it difficult to spread the solution evenly at the bottom of the plate, and it was necessary to test the variability of results due to the location of the GFP solution droplet varying inside the well. Finally, several empty wells were also measured, in order to look at the background fluorescence in them.

The 96-well plate was then loaded onto the fluorometer and fluorescence was measured with a counting time of 0.6s, with four repeats per well, using a filter for insert wavelength.

The average of the four readings for each well was taken, and considered as the result for that well. A group (e.g.: blanks) average was then taken from the set of well results for each group. These are shown on the chart below (bar values). The error bars on the chart are in fact the lowest and highest well averages for that group. 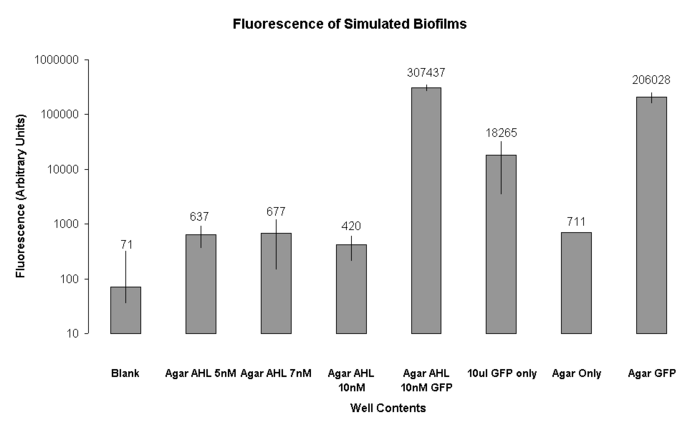 Logarithmic plot of average fluorescence (with maximum and minimum shown as error bars) for each of the agar film tests and controls. Note that because the plot is logarithmic, so are the error bars - the error for GFP only is smaller than that for both Agar with GFP samples.
Click here to download the data analysis spreadsheet and chart. Click here to download the raw data file.

As shown on the bar chart above, wells containing agar only or agar with AHL showed around 5-10 times more fluorescence (around 400 to 700 units) than the empty, or blank, wells (around 71 units). Addition of 10x diluted GFP stock solution to the films increased fluorescence to around 200000-300000 units. The variations in film shape and coverage resulted in differences in fluorescence of up to 50000 units.

This shows that there is a large difference between clear agar films, and those containing GFP solution. Additionally, the GFP signal is very strong and discernible. However, the variability in results arising from the shape and spread of the agar film indicate that comparisons between different well measurements will be difficult to make, especially if time and concentration dependency curves are to be obtained.

The three wells containing only 10μl of GFP gave vastly different readings: 3435, 17988, and 33373 units of fluorescence. This shows that, for small volumes, it is difficult to obtain repeatable measurements because the location of the droplet on the well surface affects the reading.

Note that the fluorescence observed for the same volume and concentration of GFP solution over the agar film is almost an order of magnitude higher than that for wells with GFP solution only, even when considering the highest GFP-only reading of 33373 units. This may be because the GFP solution is absorbed and spread over the gel surface, giving the fluorometer light a larger, flatter surface area to reflect upon in comparison to the tiny, almost spherical, droplet of GFP solution found in the wells without the agar film. This has implications for readings made in other experiments - if the volume of solution used is too small so as to not cover the bottom of the well completely, then the results may not be reproducible.

It is possible to create AHL containing agar films at the bottom of the wells in the fluorometer plates. However, care must be taken to ensure that the films completely cover the surface of the bottom of the well and contain no bubbles. Furthermore, in spite of the agar films showing a basal level of fluorescence around 400-700 units, it is possible to discern between films with and without GFP because, at least for high GFP concentrations, the GFP signal will be much stronger.