Design features imposed by our specifications:

From the previous constrains a final design is presented: 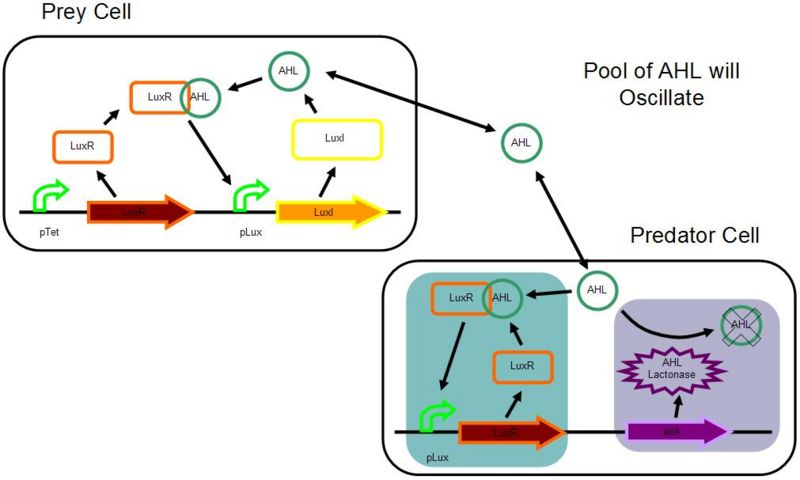 Figure 1. Full system overview showing interacting populations of cells. The Prey cell produces a constant amount of LuxR. The lux R expression is controlled by the tet promoter. LuxR binds AHL and this complex activates transcription at the Lux promoter (pLux). This leads to productin of the Enzyme LuxI. LuxI will produce AHL. The AHL will be bound by more LuxR and create a positive feedback loop. AHL can freely diffuse out of the prey cell and into the predator cell. Here it is bound by luxR. The AHL-LuxR complex will bind the pLux Promoter leading to more LuxR being made. The gene Aiia is also transcribed leading to the production of AHL-Lactonase which degrades AHL so the Predator cell senses and kills AHL. This system is based on Lotka Volterra. However there are important diferences. So the system has been re-modeled and is discussed below

The full system is based on 2 parts which can be found in the Registry.

As of 20 August, we have updated the design of our system due to some complication we overlooked when designing our initial system. First, the prey cell must be controlled so that it does not reach a steady state before we implement it into our system. Ideally, we would like to have a method of control to induce or inhibit the expression of AHL molecules in our system. Thus, we have formulated several designs which we hope will be viable in controlling the exponential expression of AHL.

Following reserach into the riboswitch, we have decided to explore this option. We are using a theophylline induced riboswitch which will be placed between the pLuxR promoter and the LuxI protein coding region (the part which codes for the AHL). Once we inject theophylline into the system, the prey cell will then start the exponential growth.

Another idea we developed to control the exponential expression is the CRE system mentioned by Dr. Mann. Basically, the CRE system is a section of DNA which does not code for anything, but is placed in the middle of a coding region. Only until the necessary proteins to cut the sequence out of the DNA is manufactured, expression is repressed. The only drawback to this system is it requires two plasmids within the same cell, which might not be an easy task to achieve. Read more about the Cre-Lox System Design.

Into the tenth week of the iGEM project, the team has decided to scrap the riboswitch part (J37015RS) in favour of using an acylase to control the AHL levels in the prey cell. If we innoculate the culture with an acylase, it should degrade most of the AHL maintaining the concentration in an exponential growth phase. When putting the system together, we can easily remove the acylase by flushing out and adding the predator cell in it's place. Hence, the oscillator should begin with the prey cell not having reached the peak of the exponential production phase.

The acylase itself cleaves the entire lactone ring from the n-acyl homoserine lactone molecule as seen above producing homoserine lactone and a fatty acid. The products are no longer biologically active; however, the paper on the structure of AiiA has commented that HSL is a competitive inhibitor for AHL. This may lead to some problems depending upon the concentration of HSL left in the chemostat after we flush the acylase out.

Furthermore, we have decided to alter the design of the predator cell by adding a FLAG immunotag. The purpose of this was so that we are able to characterise the AiiA halflife and activity before producing the final system construct. When testing is done in conjunction with the modelling, this will provide us a better understanding of the way the system works. Moreover, we will be able to simulate with real values to see what we expect in our biological oscillator. The immunotag is attached to the beginning of the AiiA protein coding sequence, since we are using the AiiA sequence already containing an LVA degradation tag. We do not want the degradation tag to interfere with the immunotag, so we have decided to PCR in the immunotag to the 5' end of the sequence. The 3D design of the AiiA enzyme in one of the papers has suggested that the ends of the sequence are not close to the active site of the enzyme, so there is a small but unlikely chance that the tags will interfere with the activity of the enzyme.