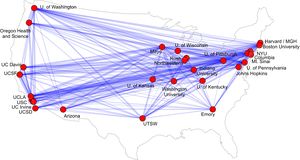 Alzheimer’s disease (AD) is a devastating neurodegenerative disorder with no effective therapies. In 1984, the National Institute on Aging created the first five AD Centers (ADCs) in an effort to coordinate research efforts into the pathology and treatment of AD. Since that time, the ADC program has expanded to include 27 centers in major medical schools throughout the United States. A major aim of ADCs is to develop shared resources – such as tissue samples and patient populations – and thereby promote large-scale, high-impact studies that go beyond the capabilities of any single investigator or institution working in isolation.

To quantitatively evaluate the performance of this program over the past quarter century, we systematically harvested every paper published by ADC investigators and used social network analysis to analyze co-publication networks.

We found that the frequency of collaborations has increased dramatically during this time, even after the expansion of ADCs and the recruitment of new investigators plateaued. Moreover, the collaborations established within the context of the ADC program are increasingly inter-institutional, consistent with the overall goal of the program to catalyze multi-center research teams. Most importantly, we determined that collaborative, multi-center ADC research articles are consistently of higher-impact than AD papers as a whole.

Dynamics of collaborative science in a CTSA 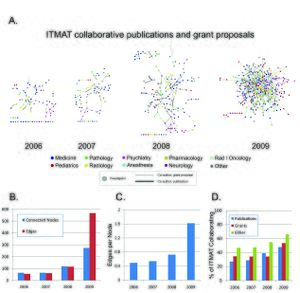 To assess the growth and evolution of a major scientific enterprise, we automatically harvested every paper and grant proposal from the University of Pennsylvania's CTSA, the Institute for Translational Medicine and Therapeutics (ITMAT). We used these data to construct networks of interacting principal investigators, and measured their dynamics using Social Network Analysis (SNA).

We found extensive growth in the frequency of collaborations within ITMAT over the course of its tenure. Most interestingly, this growth exceeded predictions based on the expansion of ITMAT's roster during this time, suggesting that ITMAT membership was itself responsible for the increasing rate of collaborative activity. This study was highlighted in Nature News.