Deoxyribonucleic acid (DNA) is a biopolymer that holds genetic information of life. DNA can strictly recognize nucleobases by forming hydrogen bonds between base pairs of adenine (A)-thymine (T),guanine (G)-cytosine (C).

From these properties, DNA is widely considered as a superior material to construct nanostructures.

Since single-stranded DNA only hybridize to strands having complementary sequence, DNA nanostructure can be constructed into desired shape by mixing staple strands that is designed to fold scaffold DNA into predetermined shape. [1]

Initially, two-dimensional structures such as star mark, smiley mark and alphabet were reported. 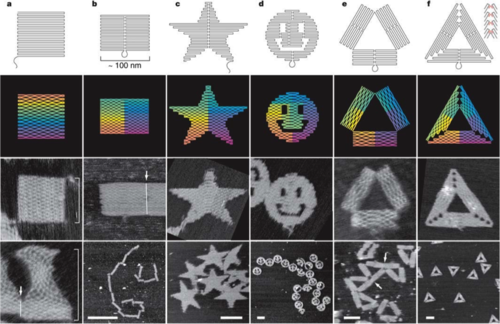 Soon after, construction of three-dimensional structure was also reported.

For example, boxes, pot-shaped and capsule-shaped[2] structures were constructed by changing the angle of joints between DNA double helix.

First example adopting movement to DNA origami is DNA origami box. First, Anderson et al. constructed cube DNA origami with nothing inside and add specific DNA strands as the kye, then the box is opened. [3]

As another type of DNA origami box, first, we also constructed opened structure, and add specific DNA strands as the triger, then the box is closed. [4]

We expect they can be utilize as a nanocontena and DDS because of their connotation. 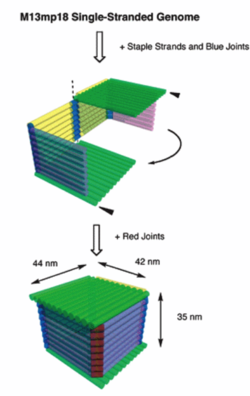 The first nanomechanical DNA origami device, in which movement of the structure links to function, is DNA pliers.

This selective binding triggers structural change of the pliers, and this enables detection of single-molecule target.[5]

This robot includes drugs, and release them to respond to specific protein.

In other words, proteins play a role as a key. So various type of targets can be treated by simply changing the key.

Structures that have various mechanical properties can also be designed. In the near future, construction of natural molecular machines may be feasible.

This year, we decided to design DNA Origami structure that dose not only move with functionality, but also grow.

We first designed “DNA Origami Chochin”, which has tube structure of 20 helices.

The tube consists of top and bottom pieces connected to each other by two DNA helices.

Successfully, DNA Origami Chochin has a characteristic that it can repeatedly open and close its mouth by strand exchange, and it has single stranded Scaffold DNA as DNA Tongue.

But the original Tongue is too small to observe DNA tongue by AFM.

We try to grow and enlarge DNA Tongue with DNA tail and observe it sticking out of the inside to the outside.

This may be able to use as molecular detection device and DDS. 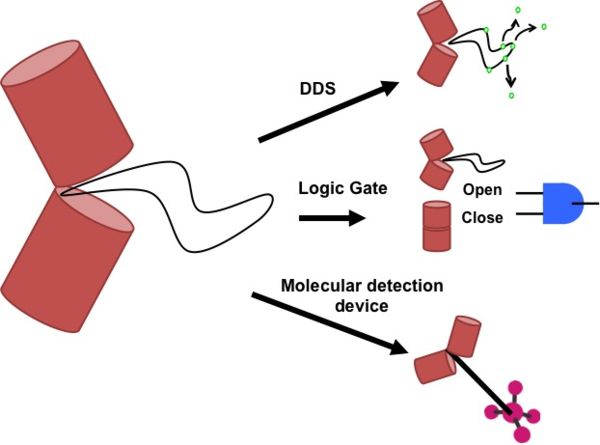 A drug is bound to a tongue and it is released by opening the structure.

This structure has two motifs.

They are closed motif, open motif.

They may be able to use as a logic gate.

The tongue can be used as molecular detection device.

When we use quencher, it is quenching.

When it is detected, it fluoresces.