This year, we decided to expand this idea to 3D. We chose Japanese famous Ghost Character called “Chochin Obake” as the target motif.

“Chochin” stands for Japanese paper lantern, and “Obake” for the Ghost.

Chochin Obake thus has oval shape that splits in the middle into top and bottom pieces.

They stick out their big long tongue in front of the people to make them scared and surprise.

We aimed to observe this motion of the mouth opening and sticking its tongue representing a big mouth under AFM.

First, we designed “DNA Origami Chochin”, which has tube structure of 20 helices.

The tube consists of top and bottom pieces connected to each other by two DNA helices.

In the first trial, however, it didn’t closed in tube and remained flat.

We solved this problem by recombining some staple strands.

Successfully, DNA Origami Chochin has a characteristic that it can repeatedly open and close its mouth by strand exchange, and it has single stranded Scaffold DNA as DNA Tongue.

But the original Tongue is too small to observe DNA tongue by AFM.

We try to grow and enlarge DNA Tongue with DNA tail and observe it sticking out of the inside to the outside. 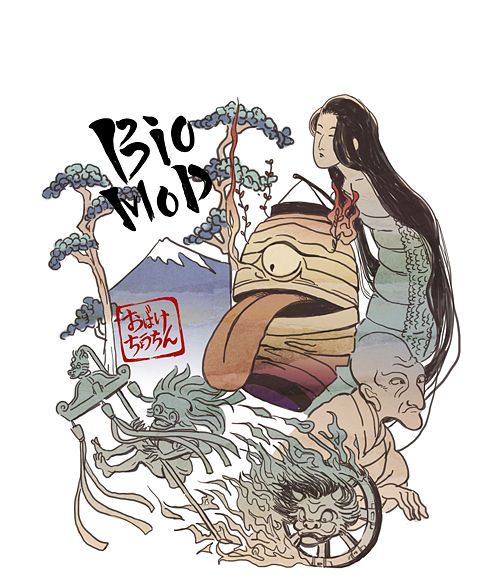 There was a couple, Iemon and Oiwa, who had a child.

One day, Oume, a granddaughter of a rich old man, Kihei, fell in love with Iemon.

But Iemon never accepted it.

So Kihei deceived Oiwa, and he let her put a poison that made her face ugly as a cosmetic.

Iemon saw her face, and his love feeling cooled down.

He finally got engaged to Oume.

To break off Oiwa, he asked friend, Takuestsu, to tempt her.

Takuetsu showed her face with a mirror by mistake.

When she found her collapsed face, she went mad and died from shock.

Iemon was pleased with her death.

He made up a fake story that Oiwa had an affair with Shohei, made immorality,

He killed Shohei, tied him to a door board togather with Oiwa’s dead body, released into the river.

These hallucinations make him kill Oume and Kihei, and took everything away from him.

This curse tormented him until he died. 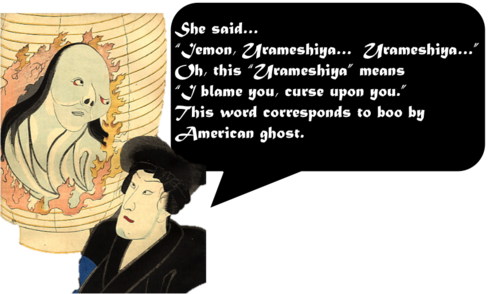