Many microbes secrete antimicrobial compounds to help them compete with other microorganisms for habitat. Some of the bacteria that are common antibiotic producers are the Actinomycetes (including Streptomycetes species), many of the Bacillus species, and the fruiting myxobacteria, to name just a few among many, many antibiotic producing bacteria. You can also test for the opposite: the sensitivity of your soil organisms (or known stock bacteria) to manufactured or secreted antibiotics.

(This testing will take 3 weeks.)
Week 1:
Identify how many potential antibiotic producers you might have. Definitely test any isolates that are likely to be Actinomycetes, Myxobacteria, or Bacillus. It might be wise to test all 4 of your isolates since the soil is the main source of microbes that supply the world's antibiotics. It's possible that you might discover the next great antimicrobial drug and get very rich by selling the patent for your discovery to a drug company. Remember that the discovery of penicillin was completely accidental.

Using aseptic technique, transfer an isolated colony (possible Streptomyces, etc.) that's likely to be an antibiotic producer to a microfuge tube containing 500μL of sterile water. Vortex to mix. Using a sterile swab, dip the swab in the diluted bacteria and make an inoculation (as shown below) down the middle of a plate of nutrient agar. Make a second plate exactly like the first for each isolate to be tested. Label them carefully and incubate the plates for ~1 week at RT. 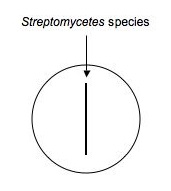 
NEED TO MAKE (Optional): If you want to test any of your isolates for sensitivity to an antibiotic producer, start a log phase broth culture in appropriate media so that it will be ready to use in the next lab.

Use the plate(s) from week 1