This is your last wet lab! Please discard all cultures as soon as you have recorded all your results and photographed your evidence. If you have positive antibiotic producers or AI producers, or cool interactions please show them to your lab instructor so they can be shared with the class and saved. Please do not leave any cultures in the lab while we are away for break. You will receive 5 "clean-up points" if we do not find any evidence of your cultures or tests. If we have to discard and clean-up later after you, you will not receive any of those 5 points.

Complete the Interaction Assays
If you haven't been provided with a digital image, please take a photo of each of your interaction plates. Make sure that the photos are sharp enough to evaluate later. Download them to your dropbox in Sakai. Email them to yourself and to each of your partners.
A sample completed assay is shown below. 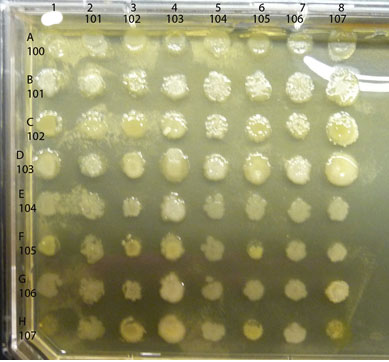 Observe the colonies on your plate, comparing any differences in the appearance of the colony growth of each isolate, alone vs mixed. Look first at each control culture: the inoculum in each of the diagonal spots is a pure culture control as are the spots in the column on the far left. Compare each "spot" where two isolates are mixed to the control spots where each isolate is growing alone. Is either isolate growing better in combination than alone? If so, you have found a mutualistic (beneficial) interaction. For example, in the assay shown above, isolate #102 appears to have a positive effect on the growth of #101, classified as mutualism. Are there combinations that show a reduction in the amount of growth of either isolate compared to the growth of the control areas? If so, you have found an antagonistic (negative) interaction. An example in the assay plate shown above is between isolates #105 and #102. Number 105 seems to inhibit growth of #102, an example of an antagonistic interaction. Note that there are sometimes "edge" effects, differences in the appearance of the colony growth in the cultures along the perimeter of the plate as opposed to those growing in a more protected locations (such as the diagonal control colonies). Spend some time with these plates, carefully and fully evaluating all possible combinations of your soil community isolates for as many as possible examples of mutualism or antagonism. Record your results in your lab notebook with copies of the photos of your plates.

Directions for the Schaeffer-Fulton Endospore stain and Capsule negative stain are found in the Protocols section of the wiki.
Stains : Simple, Gram, Endospore, Capsule. The confirmatory tests for motility are found in Protocols under MOTILITY.

Detecting Endospores
All Gram positive bacilli or any bacteria that showed a spore shaped, unstained area in the cells when Gram stained should be stained for endospores. In addition, any Gram positive isolates growing from your dried soil extract on Glyerol Yeast Extract Agar (GYEA) medium should be stained for endospores. There is no need to stain Gram negative isolates for endospores. Would it surprise you to know that most of the spore forming bacteria are common soil organisms? Why would the capacity to form a highly protective, heat tolerant, dessication resistant, non-metabolic spore be useful to soil community microorganisms? Would this capacity give those members a competitive advantage to survive weather extremes? Would you expect a tropical greenhouse habitat to contain relatively fewer or more spore forming members than other habitats?


Confirmatory Tests for Motility
Directions for the Hanging Drop motility test and Flagella stain can be found in the Motility section of Protocols. All bacteria that were positive or ambiguous for motility in NMN medium should be looked at by Hanging Drop technique. Any "swarmers" (bacteria that spread all over the plate when cultured on solid medium)should be looked at by Hanging Drop, too. If the hanging drop test is positive and you have time after you have performed any other confirmation tests or special stains, you could try the Flagella stain, but don't worry if you don't have time for this stain. It is VERY difficult to see flagella even when they are coated with several layers of stain reagent that make the diameter larger. It is hard to get this stain to work well.

Detecting Capsules by Negative Stain
Highly mucoid (sticky and wet) colonies could be tested for the presence of a capsule using the capsule stain protocol if you have time. A capsule is a secreted, protective, adhesive, polysacchride envelope layer outside the other parts of the cell envelope. Some, but not all bacteria produce a capsule. It tends to be a virulence factor in bacteria that are human pathogens because it makes it more difficult for the immune system to recognize the bacterium with a capsule as a foreign invader. If you don't have time to perform this stain to check for the presence of a capsule, don't worry. This stain, like the flagella stain, is also difficult to get to work well. If you want to try it, the protocol is found in the Special Stains section of PROTOCOLS.

Repeating Gram Stains
If your Gram stain results were ambiguous or not what you expected from the growth patterns you observed on PEA and EMB media, you should probably repeat those Gram stains. If there are any PEA and EMB plates, consider rechecking the growth of your cultures on these media. Perhaps your earlier cultures were not pure? How did your stains look? Is it possible there were more than one organism in what you thought were pure cultures? If so, what effect might this have on your genomic data? What other implications might there be?

Study for your Lab Practical.

In Lab 9 you will have a LAB PRACTICAL, an exam that tests your ability to function as a microbiologist in the lab. There will be two main categories of assessment: testing practical skills such as your ability to perform crucial techniques (aseptic transfer, streaking for isolation, performing a Gram stain, micropipetting, etc.) and testing for your understanding of the biological basis behind the work that you've done this semester. For example: we might give you a starch plate flooded with iodine and ask you which, if any, of the bacteria forming colonies on that plate are capable of digesting starch, what metabolic enzyme is produced by these bacteria that allow that digestion and/or what is the ingredient in the medium that allows this evaluation?

Wondering how to study? A lot of what we will evaluate you on, you already know how to do. (You could probably do some of these techniques,such as streaking for isolation, in your sleep!) You do not have to memorize the steps for each procedure. You will have access to the directions that are printed in the wiki for performing techniques, such as Gram staining; however, you will not have access to how to read those tests or to the theoretical background information about those tests, such as the cell structural differences that the Gram stain uses as its differentiating principle. You should know that sort of information for each test. Study the background information found in the Protocols section of the wiki and in each lab description. The protocols for which you are responsible include ALL of those that you performed this semester. You should understand how to evaluate these tests (eg. differentiate a positive test from a negative test and how the tests work).

Don't forget the molecular tools we used for identifying bacteria using their 16srRNA gene sequence. This process, both the technical aspects and the theory are fair material for this practical. Your homework assignment on the theory behind that work should be a good study guide. Study ALL of the background information in the wiki in LABS 1-8 and in the general information page for our project in the main menu.

Continue to wind down and complete your work on your isolates. Start discarding your cultures.