There are two types of photoreceptors distributed unevenly across the retina: rods and cones. Rods are very sensitive cells specialized for night vision. In bright light conditions the response of the rods is saturated and cones, faster but less sensitive photoreceptors, mediate day vision. 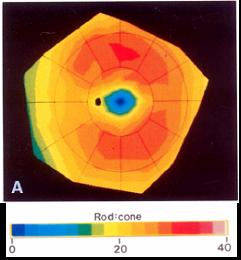 The rod:cone ratio is lowest in the foveal region and higher in the periphery. The black dot to the left of the fovea represents the optic disk, the site where axons exit the retina.

There are three types of cones, each one of them responding best to different wavelengths (short, middle, and long). Their combined responses generate color vision.

Opsin, the key molecule for phototransduction

Both rods and cones contain opsin, a G protein-coupled receptor. Opsin is bound to a light-absorbing chromophore, 11-cis-retinal (an aldehyde of vitamin A). Different types of opsins are involved in transducing light of different intensities and wavelengths. Each photoreceptor expresses only one type of opsin. Rhodopsin is present in rods and transduces dim light while photopsins are present in cones and generate color vision.

Figure 1: An intracellular recording from a single cone stimulated with different amounts of light. Each trace represents the response to a brief flash that was varied in intensity. At the highest light levels, the response amplitude saturates. (Neuroscience, Purves et al., 2001)

Figure 2: Cyclic GMP-gated channels in the outer segment membrane are responsible for the light-induced changes in the electrical activity of photoreceptors. (Neuroscience, Purves et al., 2001)

Light entering the eye activates the opsin molecules in the photoreceptors

Upon photon absorption, 11-cis-retinal undergoes an isomerization to the all-trans form, causing a conformational change in the rhodopsin. The activated rhodopsin is called metarhodopsin II.

The precursor for 11-cis-retinal is all-trans-retinol (vitamin A). A diet rich in vitamin A is crucial for vision, since vitamin A cannot be synthesized by humans.

Activated rhodopsin causes a reduction in the cGMP intracellular concentration

The photoreceptor is hyperpolarized following exposure to light

Decreased levels of cGMP cause the closing of cGMP-gated ion channels which will lead to membrane hyperpolarization.

Figure 3: Details of phototransduction in rod photoreceptors. (A) The molecular structure of rhodopsin, the pigment in rods. Rhodopsin is a G-protein coupled receptor consisting of opsin (a seven transmembrane domain protein) and 11-cis-retinal (a covalently bound chromophore). (B) The second messenger cascade of phototransduction. 1. Light stimulation of rhodopsin in the receptor disks leads to the activation of a G-protein (transducin). 2. The GTP-bound alpha subunit of transducin activates a phosphodiesterase (PDE). 3. The activated phosphodiesterase hydrolyzes cGMP into GMP, reducing its concentration in the outer segment and leading to the closure of sodium channels in the outer segment membrane. (Neuroscience, Purves et al., 2001)

Termination of the phototransduction cascade

The light response is terminated by several mechanisms.

(1) Inactivation of rhodopsin occurs through phosphorylation by the opsin kinase, followed by the binding of arrestin to phosphorylated rhodopsin.

(2) Inactivation of transducin occurs through the hydrolysis of bound GTP to GDP (Tα-GTP to Tα-GDP) via an intrinsic GTPase activity that is accelerated by the GTPase activating protein RGS9 (regulator of G-protein signaling).

(3) Inactivation of phosphodiesterase (PDE) is coupled to the inactivation of transducin. Inactivated transducin (Tα-GDP) dissociates from PDE, resulting in a cessation of PDE-mediated cGMP hydrolysis.

Amplification in the phototransduction cascade

The activation of a single rhodopsin by a single photon is sufficient to cause a significant change in the membrane conductance. This is possible due to amplification steps present in the transduction cascade.

A single photoactivated rhodopsin catalyses the activation of 500 transducin molecules. Each transducing can stimulate one cGMP phosphodiesterase molecule and each cGMP phosphodiesterase molecule can break down 10^3 molecules of cGMP per second. Therefore, a single activated rhodopsin can cause the hydrolysis of more than 10^5 molecules of cGMP per second.

Bradyopsia (or ‘slow vision’) is a condition that results from mutations in genes encoding the transducin-inactivating protein RGS9 or the RGS9 anchor protein (R9AP) (Nishiguchi et al., 2004). By accelerating the inactivation of transducin, RGS9 and R9AP play an important role in the termination of phototransduction and recovery of the light response. Patients with bradyopsia have trouble adjusting to changing light conditions, experiencing a temporary blindness when first exposed to bright light. This disorder also manifests as an inability to sense the movement of objects in a bright environment.

Retinitis pigmentosa is an inherited disorder characterized by degeneration of photoreceptor cells and accumulation of retinal pigments. This disorder, which often leads to blindness, can result from mutations in a variety of genes expressed in photoreceptors (Hamel, C. 2006). Early genetic studies of autosomal dominant retinitis pigmentosa revealed a series of point mutations in the rhodopsin gene that were associated with the disease (Dryja, TP et al. 1991). The integrity of the light-sensing molecule rhodopsin is thus crucial for the proper activation of the phototransduction cascade. Retinitis pigmentosa

Congenital stationary night blindness is an inherited disorder that affects rod photoreceptors and impairs vision under low-light conditions. This disorder may result from missense mutations in the rhodopsin gene that cause the mutated rhodopsin protein to constitutively activate transducin (Dryja, TP et al. 1993; Rao, VR et al. 1994). Persistent activation of the phototransduction cascade limits the fidelity of the light response by rod photoreceptors.

The Quest for Consciousness, by Christof Koch, 2004.