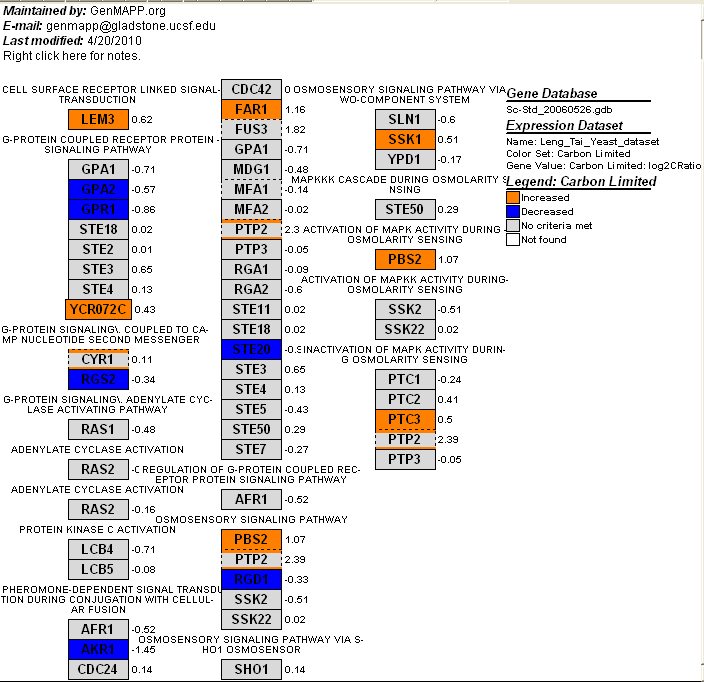 Finding our data to work with

Here are our 4 lists of about 20 GO terms each saved in Excel: Media:20 GO Terms for each culture.xls

A large portion of the decreased processes in cold acclimation of yeast involve sugar metabolism. This is consistent with the results of the Tai et al. paper that indicated the pathways encoded for trehalose were not up-regulated at a consistently cold temperature of 12 Celsius. A potential reason for the down-regulation of these molecules is acclimation. In cold-shock, trehalose and glycogen are up-regulated in order to combat freezing temperatures. However, in this study, prolonged exposure to a non-freezing temperature resulted in acclimation, thus the up-regulation of trehalose and glycogen was unnecessary.

During acclimation of yeast to cold temperatures, the organism needs energy molecules to carry out biological processes. Hence, the expression of GMP biosynthesis and GMP metabolism increase. Guanosine monophospate (GMP) is an ester of phosphoric acid containing a phosphate group, a pentose sugar and a guanine base. GMP plays an important role in nucleic acid synthesis for RNA transcription. In addition, both ribosomal subunits are expressed more indicating the necessity to translate proteins during acclimation to cold temperature. In addition, it has been indicated that cold temperatures slow down translation initiation. Therefore, if more ribosomes are present in the cytoplams, then the likelihood of initiation occurring increases. The increase in RNA methylation, RNA methyltransferase activity, tRNA methylation and tRNA methyltransferase activity, all indicate that new mRNA and tRNA molecules are being synthesized. Methylation is a postranscritional process that occurs soon after transcription, therefore an increase in these activities indicate that these molecules are being formed, most likely to be used for the production of proteins. IMP (Inosine monophosphate) dehydrogenase is also up-regulated because of its function relative to translation. IMPDH is an enzyme that catalyzes a key step in purine biosynthesis which is necessary for creating RNA during translation. Biotin is necessary for production of fatty acids and metabolism of fats and amino acids. In addition, biotin serves as a carrier of CO2 in the cell. Presumably, biotin would be useful in anaerobic, nitrogen-containing environments in both the breakdown of amino acids and the transport of CO2. Sulfur plays a wide range in cellular processes, therefore increased use of sulfur during cold acclimation isn’t surprising. Suflur compounds are constituents of methionine (needed for transcription) and biotin.