Photolithography is the process of transferring a template from a photomask onto a substrate that is coated with a light-sensitive chemical, termed photoresist. The substrate is generally a thin silicon wafer and the photoresist is a polymer. The overall process consists of the following steps: substrate preparation, photoresist spin coat, prebake, exposure, post exposure bake, development, and pattern transfer1. It should be noted that photolithography requires flat surfaces to work properly, and it can be difficult to create complicated 3-dimensional structures.

There are two types of photoresists that may be used: 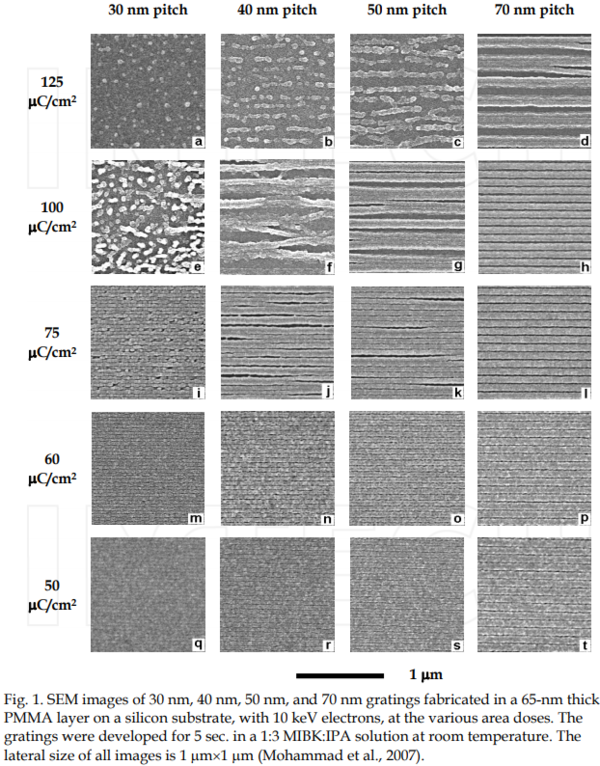 Fig 2: SEM images of 30 nm, 40 nm, 50 nm, and 70 nm gratings fabricated in a 65-nm thick PMMA layer on a silicon substrate, with 10 keV electrons, at the various area doses. The gratings were developed for 5 sec. in a 1:3 MIBK:IPA solution at room temperature9.

The substrate preparation step is necessary to successfully adhere the photo resistive material onto the substrate. Typically, a wafer will be baked at 200°C-400°C for 30-60 minutes to evaporate any water present on the surface. The surface may also be pre-treated to improve adhesion, and wet etching can be used to remove organic material and/or native oxide. This baking process will not fully remove the surface silanol groups formed when silicon atoms bond with water. The hydroxide group of the silanol is replaced by a subjecting the surface to a reactive vapor, usually a silane such as hexamethyldisilizane (HMDS). The dehydration bake and subsequent priming steps may be performed in the same oven1.

Once the substrate is prepared, the photoresist is applied via spin coating. The coating may be poured before spinning, or as the wafer is spinning. The desired resist thickness is obtained by varying the spin speed, based on the resist’s viscosity1. The acceptable spin speeds are limited by onset of turbulent airflow at the edge of the wafer (determined by Reynold’s number) on the high end, and lack of uniformity at speeds lower than 1000rpm, usually speeds around 3000rpm for one minute are used.2

Retrieved from Orbital Tube The video above shows the spin coating process in slow motion.

This step serves to reduce the resist film thickness, improve its adhesion, get rid of excess solvent, and make the film less vulnerable to particulate contamination. One bake method is termed proximity baking, and consists of bringing the wafer very close (~100μm) to a hot metal plate. The wafer is then removed, and brought close to a cool plate to ensure consistent and thorough cooling1.

The mask pattern may be printed though direct contact, proximity, or projection. In the case of direct contact, the mask is placed directly onto the photoresist. Although this method offers high resolution, the mask may be damaged and yields are not favorable for high throughput production. Proximity printing keeps the mask a short distance above the wafer, but increases the minimum resolution limit. Finally, projection printing uses an optical system to project an image of the mask onto the wafer1.

The exposure process involves several variables such as exposure time and intensity. Figure 2 shows an example of differently sized gratings made using electron beam lithography, and the effect of beam intensity has on effectively creating specific grating spacing.

The post exposure bake aims to reduce undesirable ridges formed on the sidewalls of the resist material after exposure. These ridges are caused by interference of incoming and reflected light forming a pattern of varying light intensity based on depth within the photoresist layer. Baking takes place at around 100°C-130°C, and the ridges are smoothed out by diffusion of photoproducts within the resist1.

The development process dissolves the areas left exposed during the exposure step. Tetramethyl ammonium hydroxide (TMAH) can be used, and surfactants may be included to increase wafer wetting1.

At this point, the photolithographic process is complete, and the wafer is ready for etching (wet or dry). Selective deposition, ion implantation1 or used directly for replica molding. 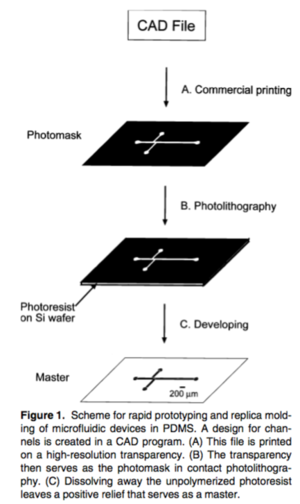 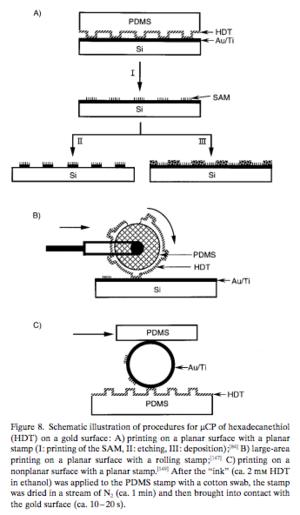 Photolithography techniques have been used in making variety of devices, like electronic devices, biosensors and microfluidic devices. In recent reports, fabrication techniques have emerged from development efforts in photolithography.3 Photolithography in general, has three applications: fabricating stamps and molds, solid objective printing and three-dimensional nanofabrication using a conformable photomask.3 In the application of fabrication technique, people have been using rapid prototyping for a device in a computer aided design (CAD) program.4 The process contains producing a positive relief of photoresist on silicon wafer. Figure 2, obtained from McDonald's work, illustrates how rapid prototyping works.4

To be more specific, micro contact printing has been used with the principle of photolithography. Microcontact printing (mCP) is a flexible, non-photolithographic method that routinely forms patterned SAMs containing regions terminated by different chemical functionalities with submicron lateral dimensions.4 The procedure is in Figure 4.1

As mentioned in previous session, microfluidic devices have long known to be made by photolithography technique. There are several reports of microfluidic systems based on PDMS.4 One of the systems is called CE system.5 The channels in PDMS was made by casting the polymer against a commercially obtained master that was composed of a positive relief structure of silicon. However, the devices were not sealed tightly.5 In the following work, another method using a combination of high-resolution printing and contact photolithography process was created.5 This technique has been described previously and has been used to generate a variety of microstructures with dimensions >20 μm.6,7 The process is shown in Figure 5.5