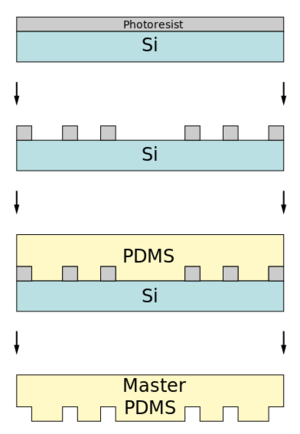 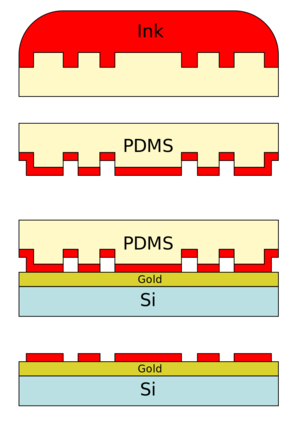 The PDMS stamp is dipped into the "ink" of interest, and then applied to the substrate. Inking and stamping times vary depending on the properties of the ink and substrate.

Microcontact printing originates with research in micromachining applications by Whitesides et al. The Whitesides Group demonstrated a novel form of microfabrication by printing self-assembled monolayers, or SAMs, of alkanethiol (a common 'ink') on a gold support (a common substrate). The ink then acted as a form of photoresist in wet etching of the gold substrate by protecting the gold from corrosion caused by the etchants. Additional complex etching methods may be employed to further achieve high resolution microstructures. The true value of this method is that it avoids the repeated use of traditional photolithographic techniques in micromachining. The Whitesides Group also demonstrated that microcrystal arrays were capable of being fabricated using this novel microcontact printing approach.

Cell-cell interactions may be studied using micropatterning techniques like printing. Bhatia et al. demonstrated that microcontact printing allowed spatial control over liver cell populations, and thus allowed a highly sophisticated method of investigation of cell growth, movement, shape, and death. In this study, collagen structures were immobilized under a patterned photoresist mask. The collagen then acted as an adhesive extracellular matrix for a patterning of hepatocytes and nonparenchymal cells. The cell interactions in this microenvironment were then studied.

Several challenges arise during microcontact printing, most of which will lead to poor ink or pattern transfer due to distortions of the stamp pattern.

Similar to roof collapse, pairing can occur due to a high stamp aspect ratio, specifically narrow feature roofs. Adhesive forces between the interface of adjacent features can cause them to pair up and deform the stamp pattern. Delamarche et al. studied the stability of PDMS microstructures[12], and they proposed that during drying of the stamp for wet inking, the receding solvent meniscus induced local capillary forces driving the microstructures together.

Volume defects of the stamp are common in microcontact printing. Shrinking can occur during the curing process, and results in a PDMS stamp differing slightly in size from the master. Use of organic solvents during wet inking can cause swelling. Ethanol is a commonly used solvent as its swelling effect is minimal.

Vapor phase diffusion and surface diffusion of the ink can occur during contact with the substrate, and may lead to ink spreading into undesirable regions of both the stamp and the substrate. Resulting patterns typically have low or poor resolution and may look splotchy or warped if the ink is highly diffusive.

Cau et al. demonstrated that perfect reproducibility and homogeneous pressure is possible by magnetic field printing. By creating a second layer of PDMS injected with iron powder, the stamp was able to be manipulated using fully automated equipment utilizing a magnetic field. The field maintains the position of the whole PDMS stamp via the iron powder, and can be adjusted for the size of the stamp features (i.e. increasing or decreasing the strength of the magnetic field to allow or prevent some margin of movement and avoid feature damage). 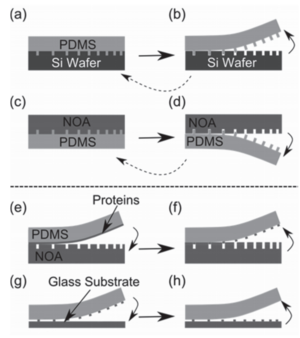 Helmuth et al. used a piezoelectric actuator to print on a gold substrate with contact times on the scale of miliseconds. By minimizing contact time they prevented any diffusion of extra ink from the stamp, and prevented the print from being blurred. Their technique is very dependent upon the transfer properties of the ink they were using, but serves to illustrate the advantages of studying the transfer properties of one's ink and using the absolute minimum contact time to create the optimal print.

This technique attempts to address some of the stamp deformation issues by performing stamping within a non-compressible fluid. Bessueille et al. have shown that by stamping in a liquid, a much greater pressure can be applied to the stamp without deforming the pattern. additionally, higher aspect ratio features can be stamped. While conventional microcontact printing shows serious deformation over a ratio of 10:1, when submerged, a 46:1 ratio transfers perfectly, and ratios as high as 83:1 are still highly functional.

Liftoff printing is a technique that is intended to compensate for printing flaws caused by overly large aspect ratios. The technique was first used by Ricoult et al. to create an array of microdots which could not have been printed using conventional means. Instead of creating a stamp with an array of posts to print the dots, the team created a negative stamp, coated a flat piece of PDMS with their ink, and then lifted off the unwanted ink using the negative stamp. This left ink on the PDMS only in the micro dot array. This technique can be applied in similar situations where conventional stamping methods would fail.