Vanilla Claw was equipped with sticky ended regions; we planned on demonstrating binding via gel shift and TEM imaging. It was decided that aside from those two techniques it would also be helpful to illustrate virus-capsid binding and conformational change through an energy transfer technique (FRET). For that, NClaw was designed differing only from "Vanilla" claw by the presence of the acceptor and donor modified staples and their adjacent staples. As mentioned in the previous section: one acceptor site and two donor sites near the hinge region of the claw. n the initial approach, claw was designed to have one virus-binding site on each arm. After binding to capsid was not successful (see Capsid section below), we decided to add multiple binding sites to each arm of the arm, varying from 9 (3/arm) to 15 (5/arm). It was seen that the 5S Claw showed more binding (See Figure 14 in Results). In this case, more binding was shown by polymerization on the gel. Though binding efficiency was increased, there was now an even greater problem with claw aggregation and polymerization.

In an attempt to limit polymerization, the TClaw was assembled, equipped with tether staples extending from one arm to the next, effectively rigidifying the claw structure. 22nm, 31nm, 40nm, and 49nm tether lengths were originally designed (10 base pairs= 3.5 nanometers). 22nm length was the minimum calculated distance needed between each arm for the capsid to fit within. At this point, due to tether location, one of the the two FRET acceptor sites was replaced by tether attachment.. Initially the same assembly protocol was used in order to attach the tethers. This consisted of combining all strands in buffered solution, denaturing the strands by raising temperature to 90C. Afterwards, allowing them to anneal back to room temperature. This resulted in polymer formation, prior to capsid binding. (Figure 15 in Results) Afterwards we decided to try various anneal protocols; of which capsid anneal protocol (See Procedure) decreased the polymerization. This required raising the temperature to only 37C, and allowing annealing to room temperature. (Figure 16 in Results)

At this point binding of tethers was still not clearly seen, since the tethers could just have stayed in solution, not having bound to anything. Using fluorescent HEX strand, with regions complementary to those on the single stranded tether strands (31nm, 40nm, and 49nm), would illustrate tethers binding to claw, without the use of SYBR stain. By adding excess tether and HEX strand it was seen that compared to control group of only Tether and HEX, that when bound the amount of starting material decreased; possibly indicating binding. (See Figure 17 and 18 in Results section, Post SYBR stain and pre SYBR respectively). The CY3 Fluorescent Strand was then tried, due to its lower limit of detection. Figure 19 and 20 in Results (respectively post SYBR and pre-SYBR) illustrate that the tether strands were attaching to the claw.

The capsid/origami binding protocol was adapted from the protocol used by the Stephanopoulos group that worked on binding with triangle D.O., annealing from 37°C to 4°C at 1°C/min.[3]). However, the results of virus capsid binding experiments with claw were less than favorable; no significant band shifts occurred that would signify a binding the X MDa capsid to the claw. Many experimental conditions were tested to obtain binding, varying a series of anneal conditions as well as gel conditions. They include capsid/origami stoichiometry, Mg2+ concentrations of the solution during anneal, gel run temperature, and the sequence of the ssDNA used at the binding sites of the claw. Figure 11 is a summary of what was done in varying conditions for these tests. Figure 12 shows a gel image representative of all the images obtained from the various tests from Fig. 11; smeared lanes for samples of capsid+claw were common for these gels. The tests in Fig. 11 used DNA-modified MS2 capsids that were at least a year old from receive date, so our collaborators from Berkeley sent another batch of modified capsids, which were used in our most recent binding experiments.

Plagued by unsuccessful binding with our original claw design (Figure 12 in Results), we decided to take a step back and try binding with triangle D.O., the design used in the original virus-capsid binding protocol. Triangle origami was made with 5 binding sites on each side, with binding experiments immediately following. With this design, a noticeable band shift occurred, signifying capsid bound to origami (Figure 13). Hoping to mimic this success using the claw design, we looked to see what was different, other than the main difference in origami design. The only difference in the two systems was the number of binding sites on each arm/side. With this experiment, the number of binding sites per arm became another variable to test.

Even with multiple binding sites per arm on the claw, we could not get a band shift as clean as the experiment using triangle origami (Figure 13). We concluded that complex polymers form during the annealing process, resulting in bands smearing upwards in our gel images. One of the solutions we came up with to limit polymerization of capsids and origami was to restrict the mobility of the claw. To do this, we modified the design to allow ssDNA tethers to be added, which would connect adjacent sides of the arms of the claw.

The current goal of the project is successfully optimizing the conditions for capsid binding with the tethered claw design. An approach similar to the initial one using the original claw design will be taken to optimize binding. The conditions that will be varied include capsid/claw stoichiometry, Mg2+ concentration, anneal time, anneal concentration, and the like.

A problem that has plagued this project was the stability of the MS2-T 21  VLPs that we use. To properly test the binding capabilities of our DNA origami, we need to be sure that both components, the DNA origami and the VLP, are structurally sound.   DNA triangles were used as a control for the claw as they have been shown to bind to VLPs XXX(insert reference)XXX. At some point in the project, our control experiment produced irregular results. The band shift signifying the binding event between the triangle and the VLP was not as distinct now. We postulated that our VLPs degraded during its time stored at 4°C.

To confirm the degradation of the VLPs, our collaborators sent fresh VLPs for our use. For long term storage, they suggested we add trehalose to the VLP solutions as a cryo-protectant, which would allow us to freeze our VLP’s at -20°C.

As seen in Image CC1, there is a distinct difference in behavior of the old and the fresh VLPs when binding to triangles. There is a clearer gel shift in the triangle band, representing binding to VLP, a gain in molecular weight. There is also a slight difference in the VLP band in reference to the DNA ladder. To make sure that the long-term storage procedure for the VLPs (and the required steps to remove trehalose) did not adversely affect their integrity, we bound them to triangle in conjunction with the VLP binding check. No difference in behavior between the fresh and the week-long frozen VLPs was seen.

These results confirmed the degradation of our previous set of VLPs and confirmed that long- term storage of VLPs was possible with cryo-protectant. 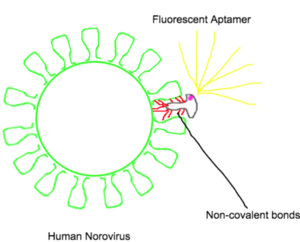 For our experiments, we focused on polarization values. We used a known fluorescent aptamer [AG3, approximately 50 Kilo Daltons] as our stable baseline polarization values, to then compare to the polarization values given when bound with a Norovirus VLP (virus-like particle) [several Mega Daltons in weight, significantly larger than the aptamer]. The human norovirus was chosen due to the clinical relevance it holds, obtaining the norovirus VLP from a collaborator. This work theoretically would preface attaching the fluorescent aptamer to the current claw design. The expected change in polarization, if the aptamer has bound, is a 500% increase, according to the literature (Giamberdino, Amanda, et al.). This is because molecular mobility decreases with an increase in molecular weight. 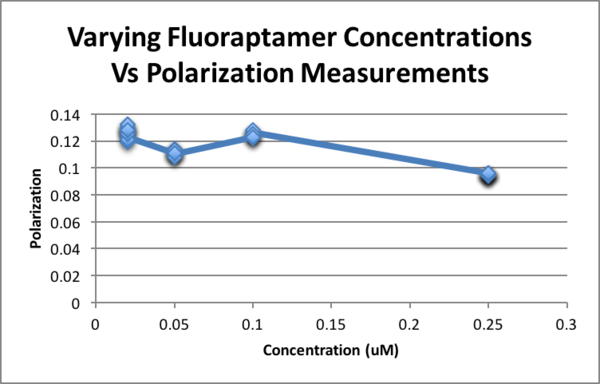