At first, we prepared staple DNA mixture of part of A. This mixture was kept at 90˚C for 10 minutes and cooled from 90˚C to 25˚C at a rate of -1.0˚C/min to anneal the strands. We observed it by AFM. Figure 1A and Figure 1B depict the AFM images at this condition. 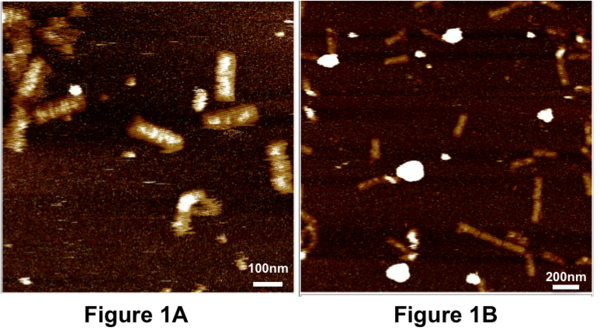 We could observe rectangular structure and dumbbell hairpin. The ratio of length and breadth of the observed structure is about 1 : 3. We thought that we could observe a clear structure to slow an annealing rate. Accordingly, we switched it from -1.0°C/min to -0.1°C/min and observed the product by AFM. Figure 2A and Figure 2B depict the AFM images at slowly condition. 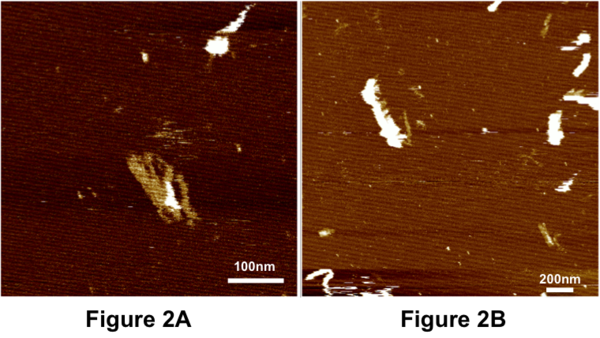 We could observe a structure, but it isn’t rectangular structure and is split structure. So, we thought that the formation of a structure isn’t influenced by an annealing rate.


In addition, we could observe clearly a structure at the first condition. Figure 3A and 3B depict the AFM images at this time. However, the dumbbell hairpin wasn’t observed. We suppose that a power of tapping by Cantilever is too strong and dumbbell hairpin has been destroyed. 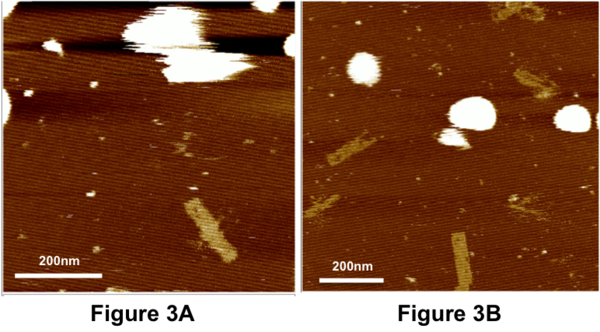 Examination of formation of monomer

To observe it more clear needs improvement of our observing skill by AFM. So, We confirmed whether three kinds of origami structure (A, B and C) is formed correctly by using agarose gel electrophoresis (1.5% agarose gel, 200 V, 400 mA, 60 min) . Figure 4 depicts the result of electrophoresis. 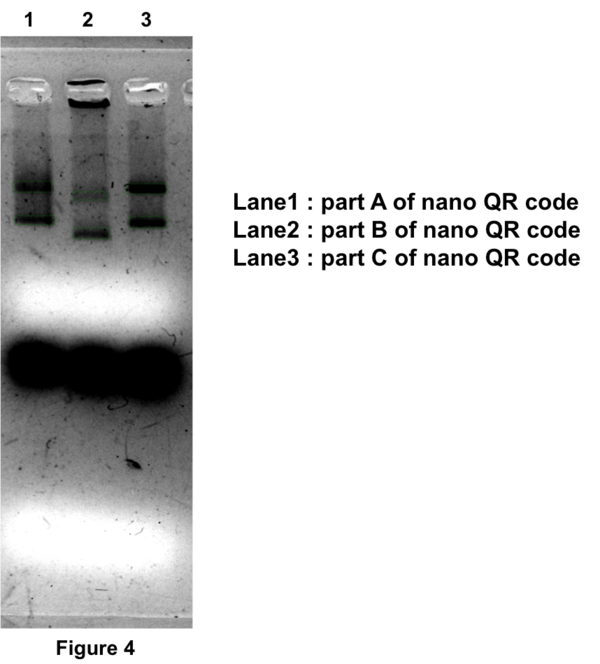 Lane1, 2 and 3 is part A, B and C of nano QR code. Two bands were observed in every lane. We annealed the origami that contained staple DNA of joints. There are possibilities that every origami form tube structure or multimers. We thought that this cause is connecting strands between A and B and between B and C are virtually same. So we excepted joints staples and confirmed whether origami structure is formed correctly by using agarose gel electrophoresis (1.5% agarose gel, 200 V, 400 mA, 60 min) . Figure 5 depicts the result of electrophoresis. 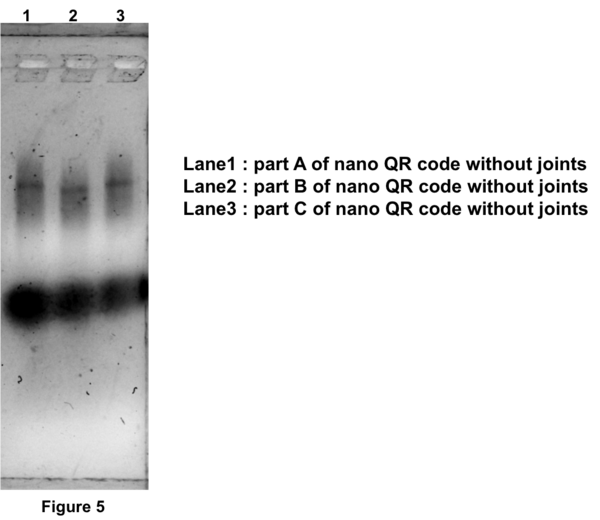 Lane1, 2 and 3 is part A without joints, part B without joints and part C without joints. Since the band became single, we thought each origami (A, B, and C) is predictably formed. Therefore we created a sheet of origami connected by origami A and B and C.

Next, we considered the plan of connecting 3 kinds of origami. We have the problem that the sequences of 3 origami structures are very similar. Sequence of joints staples between A and B is much the same as that between B and C. Only difference of the two is the presence or absence of dumbbell hairpin. There was possibility that the joints staples between A and B connected origami B and C in error. It induces forming wrong structures (e.g. A-C) and multimeric. So, we needed to think seriously about how to prevent these problems. We thought two plans to connect 3 kinds of origami.


Plans of formation of the desired structure 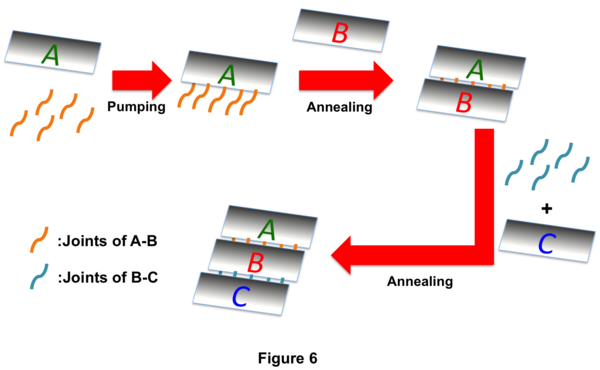 Figure 7 depicts the image of strategy of 2nd plan. The way of connecting A-B of 1st plan and 2nd plan is same. On the other hand, joints BC and origami C were mixed. By pumping the mixture (cooled from 37℃ to 25℃×3), we connected origami C with joints BC. Finally, Origami A-B and origami C-joints BC were mixed. By annealing these (kept at 37℃ for 10 minutes and cooled from 37℃ to 4℃), we connected origami A-B with origami C. This is 2nd plan. 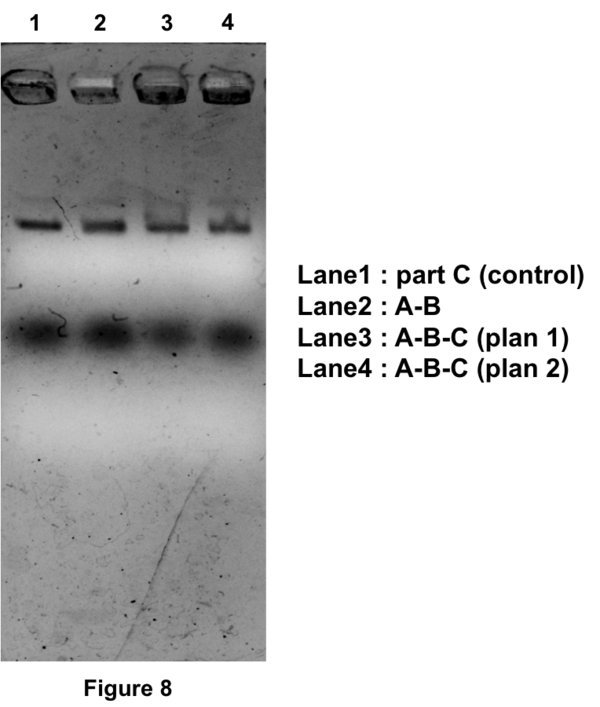 Lane1, 2, 3 and 4 is part C with joint BCC (control), origami A-B, origami A-B-C (plan 1) and origami A-B-C (plan 2). As a result of gel electrophoresis, Trinity of A, B and C were not observed. Joint staples are due to connect each other. This design, joint staples were about 32 bases. Bond number was not same between each origami. So, there was a bias in bond number between each joint staple. Even in joints AB, Some staples bind origami A more with base pairing than origami B. The others bind origami B more than origami A. We denominate the former “joints ABA” and denominated the latter “joints ABB”. To form more base pairs, rising in Tm, bond is too tightly. So joints ABA were prone to connect origami A than B. Joints ABB were prone to connect origami B than A. By adding these staples simultaneously into origami A and origami B, we failed to connect between origami A and B.
These plans are that the joints staple are divided joints into AB and BC, we experimented. From now on, joints AB will be divided joints into ABA and ABB and joints BC will be divided joints into BCB and BCC. So, we consider new 2 plans (plan 3 and plan 4). 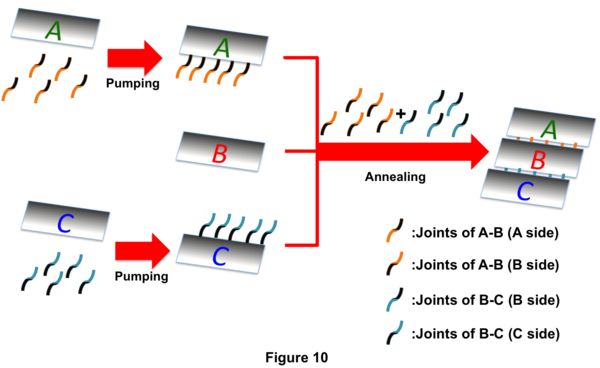 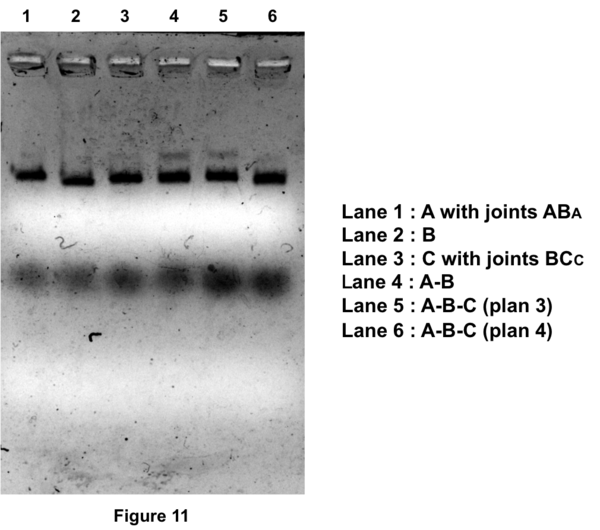 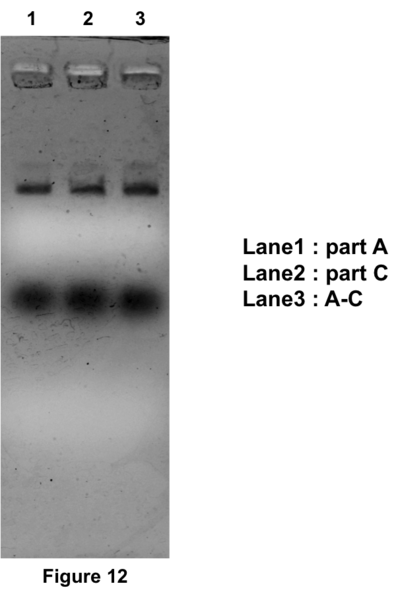