Deoxyribonucleic acid (DNA) is greatly useful materials for a building block in constructing extremely small structure. DNA nanotechnology has DNA tile at first generation and DNA origami at second generation. DNA origami is constructed by combining complementary chains between a long circlic DNA strand (Scaffold DNA) and more 200 kinds of short strands (Staple DNA) . Furthermore, Various structures could form by changing the sequences of staple DNAs in the self-organization.
It has been reported various nanostructures made of DNA origami. For instance, these are two-dimensional structure, such as a smile mark and a star mark,[1] and three-dimensional structure like DNA origami box.[2] [3] In the other, DNA pliers are known that is moving DNA origami.[4]

Our vision and the goal 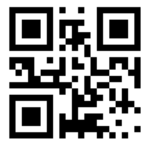 Originally, DNA maintains the genetic code that is difficult to observe visually. The number of base that is scaffold DNA (M13mp18) is 7249. This indicates that it is possible to have information of 47249 (= 104364) kinds. It is enormous. But the information is difficult to observe visually. So we use the scaffold DNA as visually information even though it might be smaller (221×21) compared with the former information content. In the past, paper has been reported to represent a character by origami of a sheet [5]. We thought that trying to have more information visually. So, we focused on QR code that is one kind of two-dimensional code (Fig. 2).

characters. Even if the QR code has wrong information, the QR reader can read the information. That has correction ability. In order to express it in nano size, we utilize height difference of DNA origami structure. We will give the height difference by inserting dumbbell hairpins in the DNA origami[1] (Fig. 3) .AFM can read nano-structure height by black and white contrast. For example, High part is reflected white and low part is reflected black when the structure was observed by AFM. So, we certain the origami structure can represent QR code by reading it in an AFM. We design DNA origami modified dumbbell hairpins such as the QR code. And we have AFM read its construction. We analyze it. Finaly, if camera App can read the figure of nano QR code made of the origami, our project will be complete!

QR code (Quick Response Code) is two-dimensional barcode first designed in Japan. The QR code system was invented in 1994 by Denso Wave. A barcode is a machine-readable label that contains information. A QR code uses four modes (numeric, alphanumeric, byte / binary and kanji) to efficiently store data; extensions may also be used. The QR Code system has become popular outside the automotive industry due to its fast readability and greater storage capacity compared to barcodes. Recently, you find it out many places, for example, snack packages, plastic bottle’s labels and a scientific paper. Applications include product tracking, item identification, time tracking, document management, general marketing, and much more. A QR code consists of black square dots arranged in a square grid on a white background, which can be read by an imaging device (such as a camera). 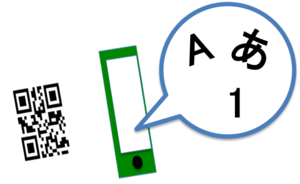 A QR code is detected by a 2-dimensional digital image sensor and then digitally analyzed by a programmed processor. The processor locates the three distinctive squares at the corners of the QR code image, using a smaller square (or multiple squares) near the fourth corner to normalize the image for size, orientation, and angle of viewing. The small dots throughout the QR code are then converted to binary numbers and validated with an error-correcting code.


The amount of data that can be stored in QR code depends on the datatype and version (1, …,40), and error correction level. QR code (version 1, error correction level) we used as reference can store 152 number of data bits, 25 alphanumerics, 41 numbers and 10 chinese characters. QR code we used as reference is simple in all versions. This is made of 21 cells × 21 cells. 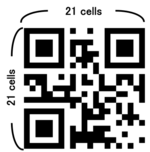 We challenge to make the smallest QR code in the world!!