Although BIOMOD is bio-molecular design competition, the inspiration for our idea has its origin in a completely different area of research: Quantum Optics. In 1899 Max Planck proposed the quantization of light into small packages of equal energy and momentum, so called photons. This was the birth of quantum mechanics. The field of quantum optics includes quantum mechanic phenomenas involving the interaction of matter and light. More than 100 years later single-photon-sources, emitting photons one by one, have become an important tool to verify basic principles of quantum mechanics and to perform experiments in the field of quantum optics. 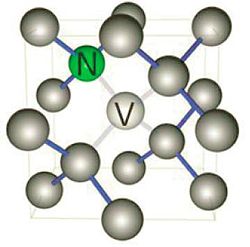 In this area of research, it is widely known, that nanodiamonds with so called Nitrogen-vacancy centers (NV centers) are excellent single-photon-sources due to their unique optical properties. This includes excellent photostability which enables us to operate such a solid-state quantum emitter system at room temperature without bleaching. Naturally, one wants to improve the optical properties of such a system. In 2009, Schietinger et al. assembled a hybrid structure, consisting of one nanodiamond which is placed between two goldnanoparticles. They were able to show that, due to the interaction between the different particles, both the excitation rate and the radiative decay rate of the color center are enhanced by about 1 order of magnitude, while the single photon character of the emission is maintained [1, 2]. However, Schietinger et al. had to assemble each hybrid structure manually with the help of an atomic force microscope. This method is quite time consuming and therefore limits the number of possible applications.
The basic idea of our project aims to utilize the self-assembling properties of DNA origami[3, 4] to create a framework for a proper placement of the different nanoparticles. So it would be easy to assemble such improved single-photon-sources in a large quantity.
With this goal in mind, we set out to check the feasibility of such a project. That would include, to attach goldnanoparticles and nanodiamonds in a controlled manner to DNA origami. Furthermore, one would have to confirm the improved properties of such single-photon-source after a successful assembly of the structure.
As already shown by several groups one can easily attach different nanoparticles, including goldnanoparticles, to DNA origami and arrange them properly on a nanometer-scale [5] However, up to this point in time, no group was able to attach single nanodiamonds to DNA origami. Due to this fact, we could not expect to implement such a self-assembled diamond gold hybrid structure in one summer. That's why we decided to restrict the goal of our project to find a method to attach single nanodiamonds to specific sites on DNA origami.
This would not only be an important step towards a self-assembled diamond gold hybrid structure, moreover it would allow researchers to study the interaction between two or more nanodiamonds and other nanoparticles which are placed in a special spatial arrangement. Furthermore, this method could also be useful for biological applications. Fluorescent nanodiamonds are already getting more important for biological applications such as bio-imaging, drug delivery, gene transfer and cancer therapy [6]. Attaching nanodiamonds to DNA origami could provide new ways of using them in biological applications.

The goal we wanted to achieve during the summer was to find an elegant way to attach single nanodiamonds to specific sites on DNA-origami structures. Therefore, several steps had to be taken.
First, we had to develope a coating strategy in order to functionalize the nanodiamonds' surfaces in order to allow conjugation with DNA-origami. To succeed in this, three important aspects had to be considered:


For the next step we had to attach the functionalized nanodiamonds to the DNA-origami. In order to achieve a specific attachment, the DNA-origami had to be designed with specifically localized docking sites.
Finally, such an origami-design allowed us to verify a successful attachment of nanodiamonds via TEM and AFM measurements.