During the summer we used different approaches to develop a suitable strategy for linking the nanodiamonds to DNA origami. This section offers a short overview of these attempts. After treatment by wet method, the nanodiamonds' surfaces offer versatile groups, such as hydroxilic and carboxylic group, that are available for further functionalization.
Before proceeding to modify the diamonds' surfaces, we first imaged a solution of pure nanodiamonds with the TEM. Both figures show the random shapes of the single nanodiamonds, which have an average diameter of approximately 50nm. Furthermore the nanodiamonds form so called clusters. This effect can be caused by internal forces, e.g. electrostatic forces, and by stochastic processes that favor a compact formation instead of single diamonds. Therefore we had to find a functionalization method that declusters the nanodiamonds. 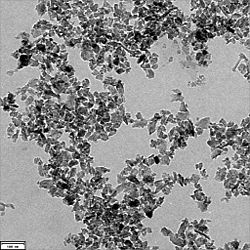 TEM-Image of clustered Nanodiamonds, which were modified with wet method (Scaling: 100nm) 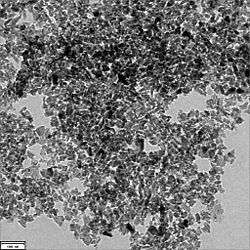 TEM-Image of clustered Nanodiamonds, which were modified with wet method (Scaling: 100nm)

Direct Linking between Nanodiamonds and DNA

Our first and probably the most straightforward approach is to use a linker between the carboxylic groups on the acid treated nanodiamond's surface and the DNA origami itself. DNA is commercially available with different functional groups, such as amine–DNA, thiol–DNA and carboxyl–DNA. Our plan was to use direct coupling between amine-DNA and carboxyl groups on the nanodiamond's surface triggered by EDCi coupling chemistry. In the next step the DNA strands are attached to the origami structure.

Coupling of amine-DNA with carboxyl groups by EDCi coupling chemistry

The protocol (see: Protocols) for the direct coupling method is summarized as followed:
A solution of nanodiamonds is exposed to an ultrasonicator bath that should force the nanodiamonds to decluster. In the next step EDCi reacts with carboxylic groups on the nanodiamond's surface and forms an active intermediate. EDCi has a more aggressive active intermediate in comparison to EDC, which ultimately reacts with the attacking amine at the DNA [1]. The evaluation of the direct coupling method by TEM showed that the nanodiamonds still form small clusters. Since the amine-DNA is negatively charged, a successful coupling to the nanodiamond's surface would actually lead to declustering. Hence the results indicate that just a small amount of amine-DNA has attached to the carboxylic groups. 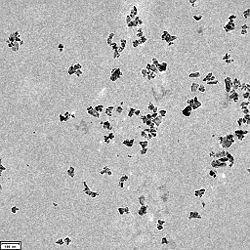 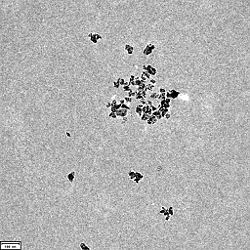 After removing the free DNA via filtration, we have taken an absorption measurement of the purified solution. The spectrum showed no peak at 260 nm, which is the absorption wavelength of the DNA. That means, the attachment of the amino-DNA did not work. Due to these results, we concluded that the number of carboxylic groups on the nanodiamond's surface is probably too low for direct coupling.

The second approach uses neutravidin as a mediator. Neutravidin is linked via EDC/sulfo-NHS to the carboxyl groups on the nanodiamond's surface and forms an active intermediate. The sulfo-NHS stabilizes the process and makes the solution more soluble. Neutravidin is a protein that has four attachment sites for biotin-DNA and is a deglycosylated version of avidin. This protein binds with high affinity and works quite well in an environment of 6.3 pH. The developed protocol is close to the protocol of binding biotin-DNA to magnetic nanoparticles (see: Protocols).
Even after changing the ratios of the chemical materials or switching between different purification methods, the TEM images of the solution still showed big clusters. Although the protocol has worked succesfully for magnetic nanoparticles in the past it was not applicable to nanodiamonds. 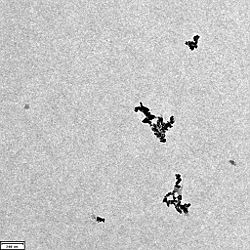 Clustering of nanodiamonds, which were treated with neutravidin via EDC/sulfo-NHS (Scaling: 200nm) 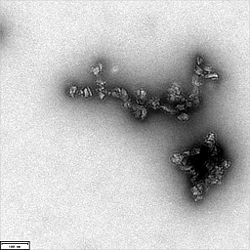 Clustering of nanodiamonds, which were with neutravidin via EDC/sulfo-NHS (Scaling: 100nm)

We think that both approaches fail due to the low number of accessible carboxylic groups or that the surface structure is not suited for direct attachment with neutravidin or amine-DNA in general.
To overcome these problems we decided to focus on a coating strategy. It (see: Coating) is based on denaturated BSA strands that are wrapped around single nanodiamonds by charge interaction and therefore gives a larger foundation for further attachment sides [2].