In prospect of future applications of nanodiamond arrangements a coating strategy has to met several requirements. First of all it has to provide a functionalization suitable for conjugation with DNA origami which is the main goal of our project.
Conjugation to DNA origami bases on well dispersed nanoparticles at physological conditions is still a difficult task but will be solved by our surface modification [1, 2] . Above that we must link the diamond specifically to our structure since exact positioning is crucial for plasmonic field enhancement studies of nanoparticle arrangements. Medical applications such as bio-labeling and hence in-vivo use demand biocompatibility. Finally any further use of our structures needs sufficient stability with respect to both mechanical and electric forces. 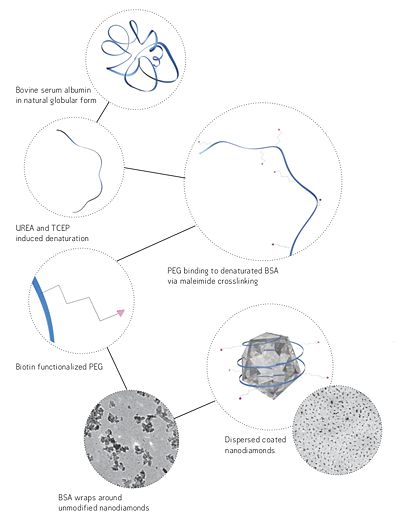 BSA will be used as the coating protein. After being denatured by use of UREA and TCEP Biotin-PEG-Mal, which binds to the thiol groups of BSA by its maleimide group, functionalizes the protein with biotin groups. The remaining amino groups on the BSA ar able to establish hydrogen bonds to the carboxylic groups on the ND surface. The BSA wraps around the ND. The coated ND disperses well at physiological conditions and its biotin groups can link to neutravidin. Neutravidin itself is bound to the used DNA origami structure.

Bovine serum albumin is a globular protein extracted from cows. The family of serum albumin is the most abundant protein in the blood plasma of mammals. Its primary structure consists of 607 amino acids. The spherical tertiary structure of the protein is caused by polar and hence hydrophilic amino acids bound outwards, whereas the apolar hydorphobic amino acids are bound towards the molecule's interior. The resulting shape is a prolate ellipse[3]. Hydrogen bonds as well as S-S bonds stabilize the structure of the protein in its natural form. The protein contains several functional groups located on the hydrophilic amino acids of the chain, in particular it contains 35 thiol groups, 99 carboxyilic groups and 120 amino groups which are crucial for the coating process (see table).

With the BSA in its natural form the functional groups are not fully accessible and linking would not be possible. Therefore it has to be brought into a chain-like structure first. This allows linking of the Biotin-PEG to its thiol groups and coating of the nanodiamonds surface by use of its amino groups. First UREA is mixed together with BSA for 5min to cut the hydrogen bonds. After this, TCEP is applied for 30min cutting the S-S bonds. The BSA is now denaturated and its shape has changed to a prolate ellipse with an elongated symmetry axis in comparison to its natural form. Since denaturalized BSA is not stable under the applied conditions, Biotin-PEG-Mal is used to prohibit refolding [1, 2].

Biotin functionalization of BSA by PEG 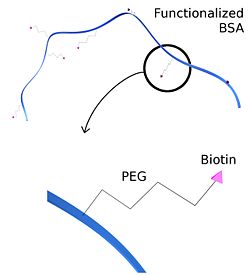 As a next step we use Biotin-PEG-Mal, a polyether with linear structure and a molecular weight of 3000 Da. It is commercially available in various forms due to its widespread use from industrial manufacturing in medicine. In our case Biotin-PEG-Mal serves two purposes. On the one hand it will act as a linker to neutravidin which itself links to the DNA origami structure. On the other hand it prevents the BSA from refolding. After denaturizing the BSA, 35 thiol groups are accessible on the BSA strand, which can be linked to Biotin-PEG-Mal via maleimide-sulfhydril reaction chemistry. This chemcial process automatically runs due to the appropriate and stable pH-value of our solution. For more information about maleimide reaction chemistry visit: http://www.piercenet.com/method/sulfhydryl-reactive-crosslinker-chemistry

Not all of the BSA's thiol groups will be occupied by Biotin-PEG-Mal due to the large size of the PEG-molecule. For this reason, we use NAM to occupy the remaining thiol groups. This prohibits a re-formation of the S-S bonds to a disulfide bond again. In the case of simultaneous mixing of Biotin-PEG-Mal and NAM with the denatured BSA Biotin-PEG-Mal would have to compete with NAM for the thiol binding sites of the BSA. Due to the difference in molecular weight it would be very likely that the thiol groups would be mainly linked to NAM. Because of that, we first apply Biotin-PEG-Mal. After waiting for 3h we mix this sample with NAM. No purification is needed up to this step. The functionalized denatured BSA is now ready to be used for the coating of the nanodiamond. 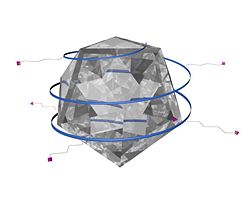 Finally the nanodiamonds will be coated with the modified BSA preparing it for the conjugation with the DNA origami structure. For this we used acid treated nanodiamonds. On their surface exist hydroxylic as well as carboxylic groups which will be used as binding sites in this step. The denatured BSA offers up to 120 amino groups, which can attach to the nanodiamonds carboxylic groups by charge interaction. This is due to the static dipole moment of both groups caused by the big electron affinity of both nitrogen (amino group) and oxygen (carboxylic group). This mechanism allows BSA strands to wrap around the nanodiamonds. After mixing the denatured functionalized BSA with the nanodiamonds, the sample has to be purified to remove the remaining BSA which would interfere with the conjugation. The now biotin-functionalized nanodiamonds can link to neutravidin and thus conjugate to the DNA origami structure. 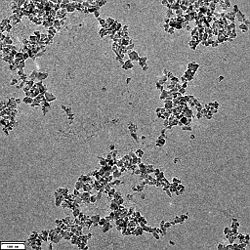 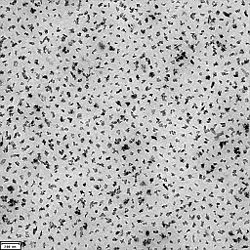 In summary the coating both functionalizes and diperses the nanodiamonds and therefore solves two crucial problems concerning the conjugation of nanodiamond with DNA origami.

Finally we have to ask ourselves wheter our coating plan matches the conditions we defined at the beginning:


In summary we believe that the developed coating offers a flexible and easy way to produce nanodiamond DNA origami arrangements of any shape and thus opens new routes to both fundamental research and medical applications.