Complete Linkage Testing
To determine in what chromosome or linkage group your dpy mutation is located, you first had to rule out the x chromosome. How did you do that? If you know that your unknown dpy mutation is on an autosome, we want to know which one?


TO DO TODAY
You and your partner will first scan all 20 plates of progeny from your self-fertilization of the dpy/+; +/unc hermaphrodites that were created from crossing males that were heterozygous for our unknown dpy mutation with 5 different reference unc strains. Consult your cross diagrams to see what phenotypic ratio differences you expect between the progeny showing linkage of the two mutations and in progeny that have unlinked mutations. You and your partner should determine which of your crosses are scorable. If you have males or only phenotypicaly WT and Unc progeny, you should not try to analyze that cross for linkage. Why not? If you have no males and some dumpy progeny, you may score that cross in this linkage analysis.

Since your dpy mutation can be in a linkage group with only one of the unc reference strains since each is located to a different chromosome, the others should show evidence of independent assortment of the dpy and unc alleles. What will independent segregation score like in these progeny? Why? What is number of the autosome on which your unknown dpy mutation is found?

Assuming that you have determined the dpy linkage group, we will continue working with that strain only. You now suspect that the two mutations (the dpy mutation of interest and the reference mutation unc) are on a particular autosome. Use Worm Base to look up the reference unc mutation and note its location on the chromosome. To begin to calculate distance between this marker and your dpy mutation of interest, you will separate 10 unc single mutants to 5 individual plates (2 per plate). Although most of these Unc individuals do not carry a defective copy of the dpy gene (genotype (+ u/+ u); however, we hope that we will pick at least a couple of phenotypically wild type Unc individuals that are heterozygous for the dpy mutation (d u/+ u). Why aren't they all (+ u/+ u) ?

In order to find out if a mutation under study in a forward genetics project is likely to be a newly discovered mutation or is, perhaps, in a previously characterized gene, we will perform a complementation analysis. If our mutation and gene has been previously characterized, this complementation analysis might tell us the name of our gene of interest. It is not unusual to have series of mutations that confer similar phenotypes and also map to a identical or similar location on a chromosome. Complementation testing can determine if two mutations are allelic (that is, in the same gene) or non-allelic (in different genes but both causing the same phenotype). This is done by crossing a mutant with a series of reference strains. In our case, we will use several different reference mutant strains. All have a Dpy phenotype, but in each strain the gene responsible for the dumpy defect has been located to a different known region of a chromosome.

The specifics of strain construction for complementation analysis vary depending on the experimental organism; however, the basic strategy in all cases is to construct a double heterozygote organism and then to examine the phenotype of this organism. Remember that a wild-type phenotype indicates that the two mutations complement one another (rescue each other) and are therefore in different genes. Conversely, a mutant phenotype suggests the mutations are allelic to one another (that is, they fail to complement). 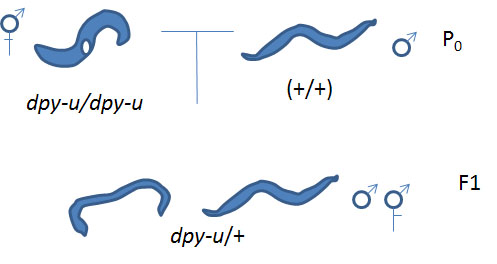