In this experiment, you will modify a protein called inverse pericam (developed by Nagai et al.) in order to affect its function. Inverse pericam (IPC) comprises a permuted fluorescent protein linked to a calcium sensor. The “inverse” in the name refers to the fact that this protein shines brightly in the absence of calcium, but dimly once calcium is added at sufficient concentration. The dissociation constant [math]\displaystyle{ K_D }[/math] of wild-type IPC with respect to calcium is reported to be 0.2 μM (see also figure below). Your goal will be to alter the binding curve by mutating a single residue in IPC. You will modify inverse pericam at the gene level using a process called site-directed mutagenesis, express the resultant protein in a bacterial host, and finally purify your mutant protein and assay its calcium-binding activity via fluorescence. You may find that you shift the titration curve, which corresponds to altering [math]\displaystyle{ K_D }[/math]; or you might change its steepness, which corresponds to changing cooperativity (and thus concentration dynamic range); finally, you might affect the maximum and/or minimum fluorescence values, thus changing the sensor's signal:noise profile (fluorescence dynamic range). You might even obliterate the response to calcium entirely! In the course of this module, we will consider the benefits and drawbacks of different approaches to protein design, and the types of scientific investigations and applications enabled by fluorescently tagged biological molecules.

We gratefully acknowledge 20.109 instructors Natalie Kuldell and Prof. Alan Jasanoff for helpful discussions during the development of this module, as well as for their prior work in developing a related module. 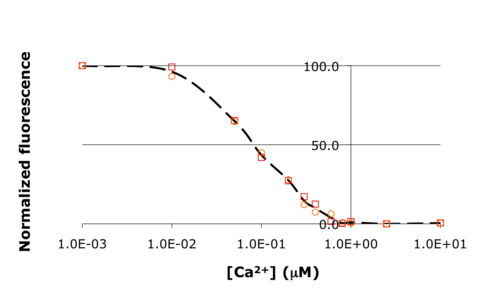 Raw titration curve for IPC. Shown here is sample data from the teaching lab: normalized fluorescence for wild-type inverse pericam as a function of calcium concentration. As you will later learn, an apparent [math]\displaystyle{ K_D }[/math] can be estimated from such a plot: it is the point on the x-axis where the curve crosses y = 50%, or ~0.1 μM here. 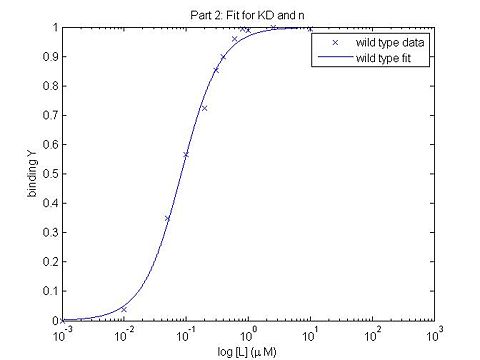