The figures at below demonstrate how to read [math]\displaystyle{ K_D }[/math] from binding curves. You will find semilog plots right particularly useful today, but the linear plot (left) can be a helpful visualization as well. Keep in mind that every L value is associated with a particular equilbrium value of y, while the curve as a whole gives information on the global equilibrium constant [math]\displaystyle{ K_D }[/math]. 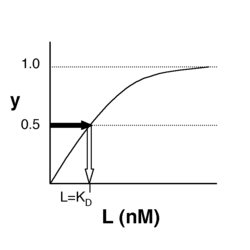 Simple binding curve. The binding fraction y at first increases linearly as the starting ligand concentration is increased, then asymptotically approaches full saturation (y=1). The dissociation constant [math]\displaystyle{ K_D }[/math] is equal to the ligand concentration [L] for which y = 1/2. 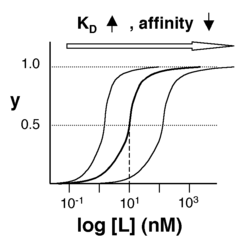 Semilog binding curves. By converting ligand concentrations to logspace, the dissociation constants are readily determined from the sigmoidal curves' inflection points. The three curves each represent different ligand species. The middle curve has a [math]\displaystyle{ K_D }[/math] close to 10 nM, while the right-hand curve has a higher [math]\displaystyle{ K_D }[/math] and therefore lower affinity between ligand and receptor (vice-versa for the left-hand curve).

Of course, inverse pericam has multiple binding sites, and thus IPC-calcium binding is actually more complicated than in the example above. The [math]\displaystyle{ K_D }[/math] reported by Nagai is called an ‘apparent [math]\displaystyle{ K_D }[/math]’ because it reflects the overall avidity of multiple calcium binding sites, not their individual affinities for calcium. Normally, calmodulin has a low affinity (N-terminus) and a high affinity (C-terminus) pair of calcium binding sites. However, the E104Q mutant, which is the version of CaM used in inverse pericam, displays low affinity binding at both termini. Moreover, the Hill coefficient, which quantifies cooperativity of binding in the case of multiple sites, is reported to be 1.0 for inverse pericam. This indicates that inverse pericam behaves as if it were binding only a single calcium ion per molecule. Thus, wild-type IPC is well-described by a single apparent [math]\displaystyle{ K_D }[/math].

For any given mutant, things may be more complicated. Keep in mind that we are not directly measuring calcium binding, but instead are indirectly inferring it based on fluorescence (for both mutant and wild-type IPC). Said change in fluorescence requires the participation not only of calcium, but also of M13. So besides the four separate calcium binding sites in calmodulin, the M13 binding site influences apparent affinity and apparent cooperativity. In short, be careful about how you describe the meanings of our binding parameters in your reports.

Returning to the big picture: when you write your research article, be sure to consider how changes in both binding affinity and cooperativity (and even potentially raw fluorescence differences) can affect the practical utility of a sensor.

You will analyze your calcium titration assay data in two steps. First, you will get a rough feel for how your mutants changed (or didn't) compared to wild-type IPC by plotting the two replicate values and their average, in both raw and processed form. Second, you will take the average processed values and plug them into some MATLAB code that will more precisely tell you the affinity and cooperativity of each protein with respect to calcium.

Today you will analyze the fluorescence data that you got last time. Begin by analyzing the wild-type protein as a check on your work (your curve should resemble Nagai's Figure 3L), and then move on to your mutant samples. If you are not familiar with manipulations in Excel, use the Help menu or ask the teaching faculty for assistance.