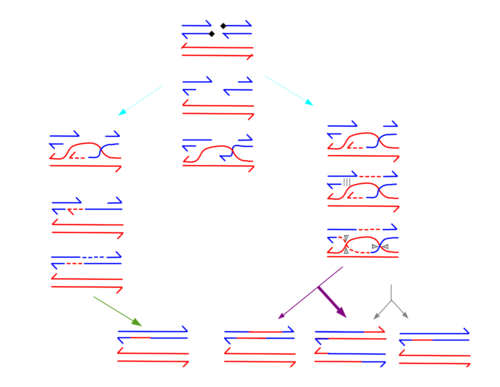 One of the advantages of sexual reproduction is the possibility to generate new combinations of alleles. During meiotic recombination, genetic information is swapped between the maternal and paternal chromosomes. This can lead to the expression of new traits. The positions of these genetic exchanges, known as crossovers, occur on average 1-2 times per chromosome across a diverse range of organisms. However, not all positions along a chromosome have an equal probability of crossing over. The patterns of large and fine scale "hotspots" and coldspots" have been the subject of much research in different biological fields.

I am using the model plant, Arabidopsis thaliana, to investigate the genetic factors that influence the position of crossovers at a genome-wide scale. A crossover is generated when the homologous chromosome is used to repair a double-strand break. Although hundreds of double-strand breaks are purposely initiated by the cells that go on to form gametes during meiosis, the vast majority are repaired using mechanisms that do not result in crossovers.

Through my research, I have developed new approaches to study where and when crossovers occur using next-generation sequencing. The advantage of this approach is that it provides information at high resolution for every position in the genome.

These are main questions I would like to answer:

Once I know more about the proteins that are involved in crossovers, I can experimentally manipulate their activity. By employing this strategy, I can seek answers to the following questions:

Many scientists are interested in understanding which genes produce which traits. If the trait is quantitative (varies continuously in a population), then a technique known as Quantitative Trait Locus (QTL) mapping is employed. This technique takes advantage of recombination to identify which parts of the genome are associated with a given trait.

Crops have been improved by humans for centuries by taking advantage of recombination and artificial selection. Since recombination does not happen uniformly across the genome, this creates blocks of genes that are inherited together.

Since recombination can create new combinations of alleles, it can produce traits that did not exist in the parental generation. These "new" traits can then be subject to natural selection.

Altering recombination rates may also influence the efficiency of natural selection. One way to investigate this would be by using artificial selection to experimentally evolve different traits.