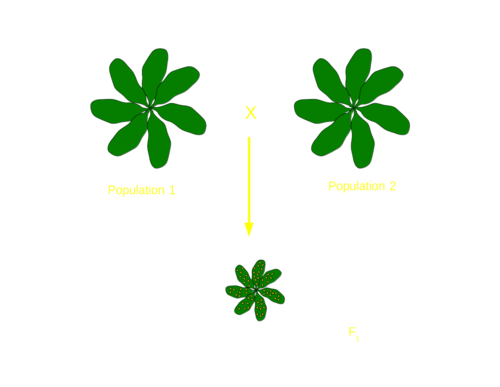 When individuals from divergent populations (or species) meet and reproduce, hybrid offspring are formed. Hybridization is quite common in nature and can lead to new phenotypes that are not present in the parental organisms. These phenotypes can respond to natural selection differently, and therefore hybrid organisms can experience a fitness advantage or disadvantage. Plant and livestock breeders have long known that hybridization often leads to growth and yield advantages that have been used to improve our food supply.
However, hybridization can sometimes be detrimental. Interactions among diverged alleles can negatively affect growth and fertility, thereby reducing fitness. Why is it that the causal alleles don't cause problems in the parental lineages? Dobzhansky and Muller proposed a model that involved two loci, A and B, where a new allele at locus A arises in one population and a new allele at locus B arises in another. When individuals from the two populations meet and reproduce, the resulting hybrid has a combination of alleles at A and B that have evolved independently.

In the model plant, Arabidopsis thaliana, about 2-3% of intraspecific crosses between different populations result in aberrant phenotypes in the first generation. This phenomenon, known as hybrid necrosis, arises because the pathogen defense response system is hyperactive, causing reduced growth and cell death. In all cases where the underlying genes are known, at least one of the causal genes is an R-protein (protein responsible for detecting pathogen infection). Thus, interactions among genes from divergent lineages lead to the improper recognition of self as non-self. Most of these involve 1-3 loci, fitting with classic and modified versions of the Dobzhansky-Muller model.

Cases of hybrid necrosis are caused by deleterious interaction among 1-3 loci. Necrosis can be observed when the causal alleles are taken from the parental lines and expressed in a single genetic background. However, the genetic background can also affect the severity of the phenotype conferred by the two causal alleles. This means that there are wild populations of Arabidopsis thaliana that carry natural alleles that modify the phenotypic effects of hybrid necrosis genes.

I am using next-generation sequencing to map these modifiers and investigate the answers to the questions above.

The expression of hybrid necrosis is also influenced by environmental factors. Temperature, for example, is negatively correlated with necrosis, meaning that necrosis is completely absent or extremely attenuated at higher temperatures. The specific temperature at which symptoms completely disappear is different for hybrids with different underlying genetic causes and there is only one case discovered so far that cannot be suppressed at any temperature. The genetic mechanism also determines whether the temperature response will be linear or non-linear.