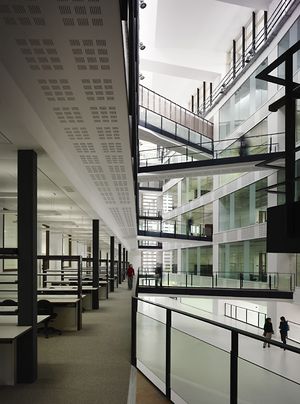 The atrium of the Manchester Interdisciplinary Biocentre.

Welcome to the MIB. We are a University of Manchester Research Institute designed to enable the academic community to explore specific areas of interdisciplinary quantitative bioscience. The philosophy and vision underlying the MIB Research Programme have been inspired by the outstanding achievements of distinguished interdisciplinary scientists over many centuries1. Planning for the MIB project was initiated in late 1998, and was officially opened on October 25th 2006. The MIB works in partnership with all four Faculties of the University, and all group leaders in the Institute are members of Schools within the university. Our work is therefore fully integrated into the research strategy of the university. Collaborations are also under development with other interdisciplinary biocentres in Europe, Asia and the USA.

Much thought, time and effort have been invested in developing both the concept and the physical environment of the MIB. Most importantly, a core component of MIB operational philosophy (which is reflected in the design of the building) is to promote interaction and openness between researchers from different backgrounds.