This is my lab notebook

Repeat microchip data normalization for Ontario and GCAT from protocol Dahlquist:Microarray Data Processing in R. Data processed 1/30/15, but repeated today in order to record protocol to this notebook. Both normalized Excel data sheets will be compared to each other and to Natalie's to determine if there is a difference in normalization from computer to computer.

Completing Week 11 and Week 12 assignments from [BIOL398]. I will complete statistical testing of wild type data, and generate a network from this data.

Completing Week 13 and Week 14 assignments from [BIOL398]. I will use profile #45 from the YEASTRACT database as the basis for the network to be run through GRNmap. Including the four deletion strains, this network has 23 nodes and 46 edges.

Steps 4-5: Within- and Between-chip Normalization

Installing R 3.1.0 and the limma package

The following protocol was developed to normalize GCAT and Ontario DNA microarray chip data from the Dahlquist lab using the R Statistical Software and the limma package (part of the Bioconductor Project).

Within Array Normalization for the Ontario Chips

Create MA Plots and Box Plots for the GCAT Chips

Input the following code, line by line, into the main R window. Press the enter key after each block of code.

Create MA Plots and Box Plots for the Ontario Chips

Input the following code, line by line, into the main R window. Press the enter key after each block of code.

Before we move on to further analysis of the data, we want to perform a more extensive sanity check to make sure that we performed our data analysis correctly. We are going to find out the number of genes that are significantly changed at various p value cut-offs.

Modified t-test for each timepoint

into the second cell below the column heading. For example, the equation for t15 reads

Copy this equation and paste it into the rest of the column.

(NOTE: in this case the number of replicates is 4. For dHAP4 strain, t90 and t120 only have 3 replicates. Be careful that you are using the correct number of parentheses.) Copy the equation and paste it into all rows in that column. Create the equation for the rest of the timepoints and paste it into their respective columns. Note that you can save yourself some time by completing the first equation for all of the T statistics and then copy and paste all the columns at once.

Summarized results of modified t-test (and withing strain ANOVA from May 18) can be found on this document: Media:DHAP1 p-value slide 20150518 GJ.pptx

The detailed description of how this is done can be found on this page. A brief version of the protocol appears below.

Preparing the Input File for GenMAPP

Each time you launch GenMAPP, you need to make sure that the correct Gene Database (.gdb) is loaded.

with the column name always enclosed in brackets and character values enclosed in single quotes. For example:

This is the equivalent to queries that you performed on the command line when working with the PostgreSQL movie database. GenMAPP is using a graphical user interface (GUI) to help the user format the queries correctly. The easiest and safest way to create criteria is by choosing items from the Columns and Ops (operators) lists shown in the Criteria Builder. The Columns list contains all of the column headings from your Expression Dataset. To choose a column from the list, click on the column heading. It will appear at the location of the cursor in the Criterion box. The Criteria Builder surrounds the column names with brackets.

The Ops (operators) list contains the relational operators that may be used in the criteria: equals ( = ) greater than ( > ), less than ( < ), greater than or equal to ( >= ), less than or equal to ( <= ), is not equal to ( <> ). To choose an operator from the list, click on the symbol. It will appear at the location of the insertion bar (cursor) in the Criterion box. The Criteria Builder automatically surrounds the operators with spaces. The Ops list also contains the conjunctions AND and OR, which may be used to make compound criteria. For example:

Parentheses control the order of evaluation. Anything in parentheses is evaluated first. Parentheses may be nested. For example:

Column names may be used anywhere a value can, for example:

The purpose of this section is to explore which transcription factors have interesting or significant expression patterns. We will attempt to decide (1) which strain (of dINO2, dOPI1, or dYAP1) to perform microarray hybridization and (2) which strains (of dARG80, dRSF2, dRTG3, dTBF1, dYHP1, dYOX1, dPHD1, dNRG1) to test for growth impairment in cold.

Recall that the expression and ANOVA significance are specific for the dHAP4 strain.

"Voting" using p-value significance for the dHAP4 strain was added to the SURP 2015 schedule page. The purpose of this system is to compile data from all the strains and make an informed decision on which deletion strains to test in the future.

In the previous analysis using STEM, we found a number of gene expression profiles (aka clusters) which grouped genes based on similarity of gene expression changes over time. The implication is that these genes share the same expression pattern because they are regulated by the same (or the same set) of transcription factors. We will explore this using the YEASTRACT database.

We will analyze the regulatory matrix files you generated above in Microsoft Excel and visualize them using GRNsight to determine which one will be appropriate to pursue further in the modeling.

Create the Input Excel Workbook for the Model

In addition, we attended a workshop on bibliographies and databases, including information on Web of Science, Google Scholar, and LMU Lib Guides. I searched Web of Science for articles that cited the Vu and Vohradsky article (the original math model paper from 2007), and found an interesting paper that Tessa, Trixie and I will cover in journal club in a couple weeks: Yip et al. 2010. It seems to use the same or similar math models as our research. 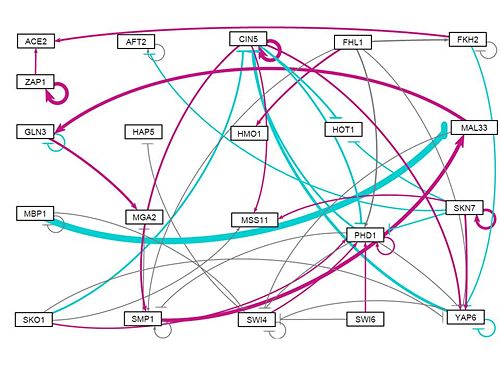 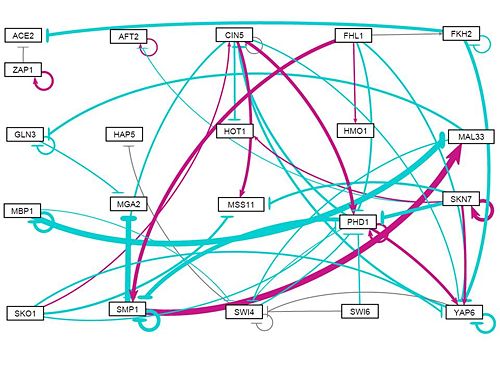